Yokley Racing’s Big Buck GNCC Side by Side Race Report 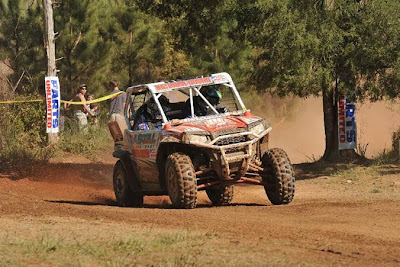 Summary – Side by Side

The GNCC Series moved on to the Big Buck in South Carolina for Round 2 of the Side by Side machines. Since the area has had very little rain leading up to the race, the track was very dusty. The course was rough with lots of ruts, and a good start would be very important. Other than the dry conditions, the weather was great with temps in the low 80’s.

The start flag dropped and after the first few turns, Yokley was in 2nd place with Kiger in 5th. Yokley made a pass for the lead in the first open field section where he could really open up the Yoshimura tuned Polaris. He then proceeded to open up a sizable gap heading into the 2nd lap of the four mile course. Meanwhile, Scott Kiger was mired behind a nose to tail group of machines which were churning up clouds of vision blocking dust. At times, he had to come to a complete stop in order to see the course. Once he worked his way past those machines into some cleaner air, he was a considerable distance behind teammate Yokley.

Even though he was now turning lap times as fast as Yokley, he could not close the gap. Kiger finished in 4th place on adjusted time. Yokley was able to build a nice gap over the field, and controlled the pace while taking care of his Ranger RZR XP900. He finished the one hour race with more than a 2 ½ minute lead. Both of the National Guard / Polaris / Coastal machines ran and handled great. 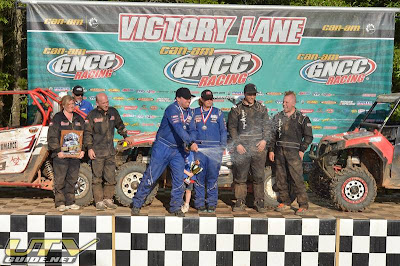 The next GNCC Side by Side race is the Mountaineer Run in Masontown West Virginia on May 26. The team is scheduled to display the race cars and team hauler at the National Guard presentation at Thunder over Louisville Kentucky on Saturday April 21. This is one of the largest air and fireworks shows in the country, and is the signature event leading up to the KY Derby the first week of May.

Yokley Side by Side Racing Team Sponsors