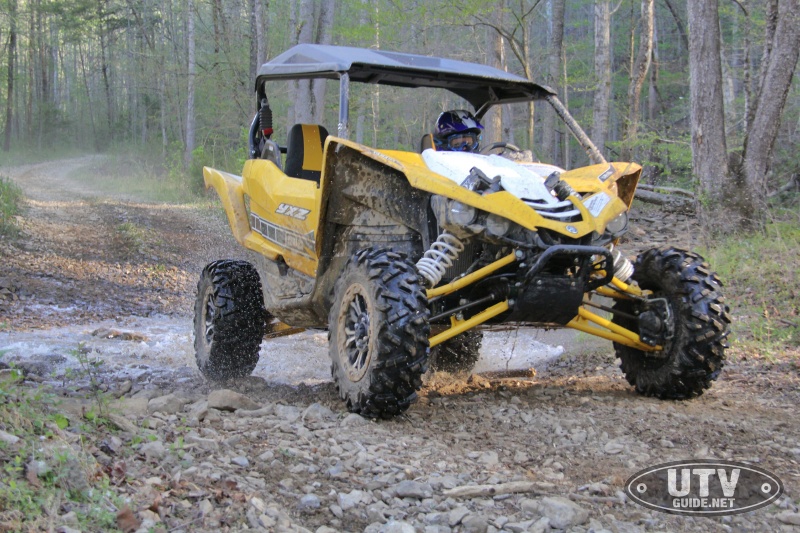 Despite a wildly successful introduction (see Yamaha YXZ1000R Unveil), Yamaha fans on the east coast were forced to stifle their excitement following the release of the much anticipate YXZ1000R.  The industries first pure sport side by side comes off as a purpose built desert and dune machine so its understandable that Yamaha would make the vehicle available first and foremost in the southwest.  It took a few months but the YXZ1000 is now available from coast to coast and Ive been itching to get behind the wheel and see how it handles in the woods. Where the southwest is known for high speeds, desert and dunes, the east coast is largely synonymous with trails, trees and rocks.  Lots of rocks.  My first opportunity to get behind the wheel of a YXZ was at Camp RZR West and it was interesting to say the least.  Fun no doubt but a completely new experience.  Im no stranger to driving a manual transmission but this wasnt exactly like driving my Honda Civic down Interstate 85. In any terrain, you have to be acutely aware of the RPMs and whats in front of you to plan whether or not you need to shift.  If youre idling along comfortably and fast approaching a large dune, youd better drop a gear or mash the gas to get the RPMs up before you start climbing.  For that reason the machine takes more planning to drive than automatic vehicles.

The same was true in the woods.  While Im no stranger to trails, having grown up riding all over central Oregon, UTVs are significantly wider and you need to be much more conscious of this before you try stuffing it between two trees.I recently had a chance to get behind the wheel of a couple of different YXZ1000Rs at the Windrock Spring Jamboree in Oliver Springs Tennessee.  Windrock Offroad Park is pretty much par for the course in terms of what you can expect for trail riding on the east coast.  Curtis Blanton, Southeast Regional Manager for Yamaha, and I climbed into a bone stock YXZ1000R and took to the trails.

The first portion of trail was relatively flat and plenty wide so there was no concern with opening it up and getting up to speed.  Having trees fly past me at around 45 MPH was definitely a different experience than driving in the open dunes but the steering on the YXZ1000R is quick and precise so I felt completely in control.  The steering wheel does feel slightly smaller to me than some other models which I actually prefer.  Coupled with EPS it makes steering, especially in tighter areas, a synch. In high speed sections the YXZ performs flawlessly.  It accelerates quick and is a ton of fun to grab gears which ads a new element to driving a UTV.  The downfall is that when you start getting into rough sections or tighter terrain, that new element definitely makes the vehicle more difficult to drive.

From the get go I discovered that the YXZ loves to be revved.  It feels like it wants to stay between 7,000 and 9,000 RPM at all times.  That complicates things in rougher terrain when youre forced to slow down and ride the clutch.  We didnt do any rock crawling but there were more than a few sections with large boulders and sharp exposed rock. With selectable 2WD, 4WD and 4WD diff-lock, the YXZ1000R will crawl over rough terrain just fine and I was actually very impressed with the ground clearance.  More than a few times I skirted a rock faster than I probably should have and winced; expecting to feel the rock come into contact with the frame which it rarely did.  Scaling rough terrain just takes an extra measure of effort because youve got to drive with one foot on the clutch as well as the gas.  Thats ok for traversing infrequent rough spots in the trail but if you happen to find yourself stuck in a long line of people lollygagging down the trail, you might regret that manual transmission bit.Another area where I felt the YXZ was a little out of its element was the suspension.  In high speed sections it felt great, even softening the hard hits from the man made runoff berms built into portions of the trail.  It was when trying to carry your momentum across rough terrain at slower speeds that the ride was less than stellar.  More than anything, this is probably where you could feel the vehicle was designed with the southwest in mind.  In high speed whoops, or tagging a rock with either of the front tires while barreling down the trail you hardly noticed it.  It was when youd slow down; either due to the terrain or traffic in the trail that the ride left something to be desired. It is for both of those reasons that Yamaha wasnt demoing the vehicle this particular weekend at Windrock.  This is a dune and desert machine shared Blanton.  It performs well at high speeds and in the dunes but out here, most people want to go out with their buddies and crawl through the trails at low speeds.  That’s going to make for a miserable day for a guy in a YXZ who wants to open it up, and more than likely create clutch issues.

To combat the clutch problem Yamaha announced last fall that it would offer a Rekluse upgrade kit which we were also fortunate enough to try.  The Rekluse equipped YXZ1000R belonging to Anthony Umphrey of Tonys Toys also had big 29 inch ITP Ultracross tires on it.  This combination definitely made rough sections easier and it allowed me to maintain lower RPMs without the fear of stalling out. The problem that has arisen, according to Blanton, is that a lot of users assume the Rekluse kit eliminates the manual transmission and allows them to drive it like they would an automatic.  Thats particularly problematic on the east coast where people tend to do a lot of starting and stopping.  Weve seen people pull up to a stop in fourth gear and then try and start again without ever downshifting.  The Rekluse is designed primarily to keep the vehicle from stalling and assist the clutch in low RPM situations where you would otherwise have to feather the clutch.  Like with an engine, a Rekluse has a break in period and requires adjustment otherwise it can cause excessive slippage and damage both the clutch and the Rekluse friction discs. For comparisons sake, after spending a little time in the YXZ1000R I took a quick spin in the Yamaha Wolverine.  Although it certainly lacked the get up and go on the straight sections, the Wolverine is definitely better suited to the trail conditions of the area where I was riding.  I wouldnt go as far as to say I enjoyed it more, but of the two vehicles it was certainly easier to drive in those conditions.

After driving Yamahas newest side by side in both the dunes and the trails, my opinion really hasnt changed; the machine is a ton of fun to drive and shifting gears makes for a completely new experience.  I love hearing that triple cylinder engine whined out and the machine is comfortable to sit in and nearly effortless to control.  That being said, because much of the riding on the east coast is tight and rocky, the machine leaves a little something to be desired.  For closed course racing or trails that are wide and relatively smooth where the machine is able to maintain speed, no problem.  But if youre one that likes to trail ride in a group, I think youll have a tough time keeping the machine happy.  It begs to be driven and the parade style riding that is so prevalent back east doesnt suit it well. Whether the YXZ1000R lived up to the hype or not is still up for debate.  I for one thoroughly enjoy the machine and love seeing one of the big four getting into the pure sport side by side game.  As for whats next, Yamaha is notorious for receiving feedback and acting accordingly so it will be interesting to see if the Japanese manufacturer has a more woods ready YXZ in the works. 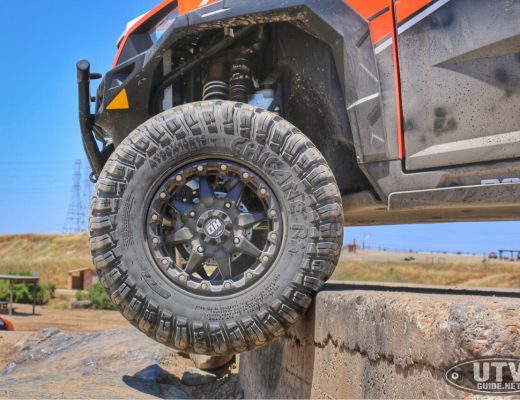