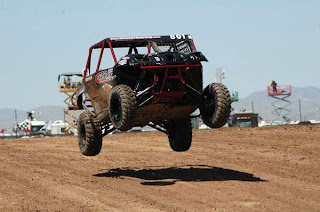 Chandler, AZ (6/1/2011) With Rounds Five and Six now in the books, Weller Racing continues to stretch out their points lead in the SR1 UTV class for the Lucas Oil Off Road Race Series (www.lucasoiloffroad.com).

Sporting a brand new sponsor canopy and pit setup provided by the Tilted Kilt, Weller Racing arrived at Glen Helen with every intention of continuing their podium streak for the 2011 season.  With only six points separating first place Weller from Doug Mittag in second place, it was important that the weekend go off without a hitch.
Corry Weller took to Glen Helen’s offroad track for practice and qualifying on Friday, and came away with the second fastest practice lap and earned a second row start for Saturday’s main in her subsequent qualifying session.

“We are making some suspension adjustments this weekend.” explained Weller, later in the pits.  “This is one of the busiest, roughest tracks that we race on, and having your suspension dialed in is key here.  Everyone seems to be hooking up great out there in these sandy corners, so we just have to make sure my car can take the jumps as fast and as smooth as possible.”

Saturday’s racing action was intense, as Weller got a great start from the second row, shooting through an opening between the front two cars that put her in the lead by the second turn.  By the mandatory caution, she had simply dominated the entire race, and when the green flag dropped once more, she continued to outrun the field.  Cody Rahders was having a great run after the regroup, however, and when Weller had the wheel ripped out of her hands in turn one briefly, it gave Rahders just enough time to make the pass for first.  Weller would chase Rahders to the checkered flag, earning her fifth podium in a row for the season.

“We have said it over and over again this year – our main goal is to finish every race this season,” stated Weller.  “If we can finish on the podium, that’s even better….and so far we have done that at every round.  Consistency is the key to winning championships, and it’s important that I don’t forget that when I’m getting all wrapped up in the moment out there on the track.” Weller adds “I am running the best of the best when it comes to suspension, tires, and performance products, so I have no doubt we can hold this lead all year long.”

Sunday’s Round Six qualifier would put Weller midpack on the start, which meant she’d have to make her way through the field if she wanted to repeat Saturday’s race. Unable to get in the lead as quickly this time, Weller settled in and began her drive to the front, making her way through some of the Unlimited UTVs in order to reach the two SR1s in the lead.  At the mandatory yellow, she had made her way into the top four, and knew she would have to really turn it on in order to catch the leaders by the end of the race.

Weller’s good luck all season would run out, however, during the last half of the main.  While racing close in the top three with another competitor, a random set of events occurred when that vehicle suffered a sudden drive belt failure and Weller lost her entire left front wheel at the same time, causing some resulting contact between both drivers.  With her front rotor digging into the track, Weller would wind up spun out in turn two and stuffed nose-first into the berm.

“Jason told me over the radio that I had lost a wheel, but I wasn’t sure if that meant anything else was broken up front” said Weller.  “When the track crew came over to flag for me and check on me, I asked them what it looked like up there.  They said I lost a wheel, but that was it, so I had them push me off the berm.  I got back on the track and made sure I finished that race – even though it was really hard to steer!” she laughed.
While she would miss the podium for the first time all year, Weller still managed to finish the race and double her points lead in the series, which puts a little more breathing room between herself and second place going into Utah.

“Our class is very competitive this year,” says Weller. “Everyone is so fast, and now it’s getting to be all about who has made some tweaks here or there, or who has figured this out over here, or made some changes over there.  It’s cool, because at this level it’s not just about the drivers, it’s about the crew chiefs and the teams and the people setting up the cars.  It’s a full-blown team/product competition and that makes for some great racing all around!”

Look for the Lucas Oil Off Road Race Series in Tooele, Utah at Miller Motorsports Park on June 24-26, as short-course returns to Utah, and the racing action really heats up in the SR1 class!

Weller Racing would like to recognize and heartily thank those who have made racing this season possible: The Tilted Kilt, Lucas Oil, Walker Evans, Lone Star Racing, Maxxis Tires, MagnaFlow, Simpson, K&N, AEM, BS Sand, LOORRS, UTV Underground, our fellow SR1 racers and friends, our fans, and our families who sacrifice so much so that we can do what we do best.