UTVGuide.net celebrates its first year on the net with the year in review

As 2008 comes to a close, UTVGuide.net celebrates a successful first year on the internet. Created in December 2007 as an off-shoot from DuneGuide.com, UTVGuide.net is now visited by nearly 50,000 visitors each month. “The UTV market segment is a very exciting place to be,” remarked Jon Crowley, owner of UTVGuide.net. “The sport UTV market took off five years ago with the introduction of the Yamaha Rhino, and new models and manufacturers are hitting dealer showrooms at an incredible pace.”
Just a few of the exciting things that happened in the UTV market during the last year include: Kawasaki’s introduction of the 2008 Teryx and 2009 Teryx Sport; Polaris was first to the market with factory long travel on their RZR S; and Arctic Cat set the bar high for power hungry sport users with their new Prowler 1000 XTZ.
UTVGuide.net was thrilled to be invited to the 2009 Arctic Cat 1000 XTZ press intro and the 2009 Kawasaki Teryx Sport press intro during 2008, and we look forward to participating in many more UTV model intros next year.
Highlights for the year at UTVGuide.net include being chosen as a test driver for Side x Side Action Magazine’s 1st UTV Shootout, and their Kawasaki Battle of the Builders. And few incredible UTV trips rounded out 2008. In May, we traveled south of the border to Baja with Off-Road Warehouse and Side x Side Action Magazine for the 1st Annual Mexico UTV run. And in October we made a trip to the Grand Canyon that won’t soon be forgotten with Side x Side Outfitterz.
Our UTV stable includes two project vehicles, a 2008 Polaris RZR and a 2008 Kawasaki Teryx. Both UTVs have been extensively featured in Side x Side Action Magazine and we are blessed to work with so many great companies that helped us on the projects. Over the next month, the number of UTVs in our stable will more than double with a new Kawasaki Teryx that we are building up for the King of the Hammers UTV Competition, a long term demo of a Polaris RZR S, and a demo unit of the new 2009 Polaris Ranger HD.
2008 has been a great year for us. As we look forward to the next year, we’d like to wish everyone a Merry Christmas and hope that everyone has a successful 2009.

About UTVGuide.net
UTVGuide.net was created to give people a place to research side x side vehicles. From vehicle tests to product reviews and from buyer’s guides to UTV Industry News, UTVGuide.net covers all aspects of UTVs. UTVGuide.net can be found on the net at www.utvguide.net. 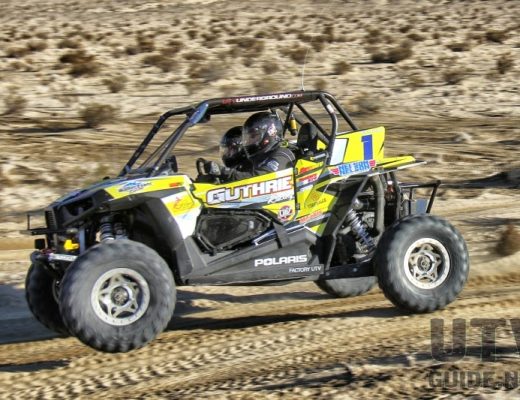