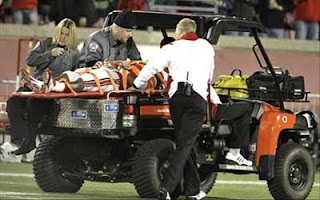 LOUISVILLE, KY – As the saying goes, “I’d rather have it and not need it, than need it and not have it!” Such was the case, when in the second quarter of Friday night’s University of Louisville versus Rutgers University NCAA football game, U of L’s senior cornerback, Anthony Conner, broke his neck while making a tackle. Fortunately, Louisville’s athletic department medical staff recently placed a new 2011 John Deere Gator 825i XUV in service to respond to just such an event. The 4X4 Gator XUV (Crossover Utility Vehicle) has fully independent front and rear suspensions, making it the perfect solution for critical off road patient transports like this. Also, this Gator is outfitted with a MedLite™ emergency medical bed insert with Turtle Tile™ matting on the stretcher deck for an even smoother ride.

Louisville’s medical staff and Yellow Ambulance of Louisville paramedics stabilized Conner on a long spine board with a head immobilizer as he laid on the 27 yard line after impact. Once stabilized, Conner was gently loaded on to the stretcher deck of the MedLite. After securing the player and backboard to the MedLite’s rails, paramedics on the Gator were able to monitor the injured player as he was safely transported over 100 yards to a waiting ambulance just off the playing surface at the other end of the field.

UPDATE: As of this writing, Conner underwent surgery at the Louisville Jewish Hospital to stabilize a cervical spine fracture. Latest reports indicate he is not paralyzed and has feeling in all his extremities. Doctors have stated there is no reason to expect Conner will not walk out of the hospital upon his release later this week.
www.eeresq.com