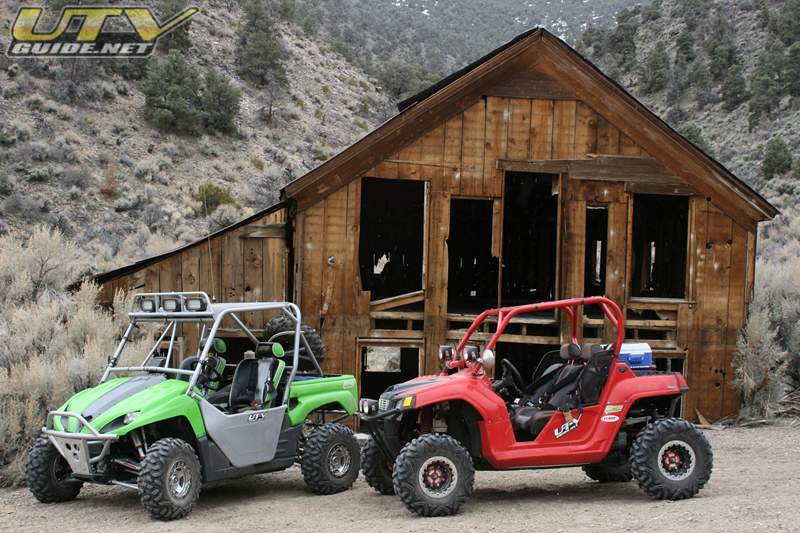 The three side x side vehicles were perfect for this type of terrain.  Many trails were too tight for a 4×4, and we traveled about 170 miles in three days which would have been too tough for the kids on ATVs.

The weather was a little cold, so the PRP heated seats in the Kawasaki Teryx and Polaris RZR were very nice.  Also high on the list of amenities were our Rugged Radio intercom and radio which allowed us to communicate easily with our passenger and other vehicle.

One big mistake in preparing for the trip came to the Lowrance 540c GPS in my Teryx.  I failed to download trail detail to a chip, so although we knew what our coordinates were, we didn’t know what trails could best take us to our destination.

From our RVs, we headed south and then east to Pine Grove.  We covered about 70 miles today.  Got lost a few times, and took a detour for a little Geocaching.

An Indian showed William Wilson the gold bearing rocks in June of 1866 and prospectors stampeded the area through the summer.  At first called Wilsonville, the camp was renamed Pine Grove, with a post office, the weekly news, and a population of 200. Two steam powered stamp mills and three arrastras treated both both and silver ores, while stages and freight lines brought in supplies and hauled out bullion.

Towards the end of the decade, the mines began to decline and by 1893, the mines were worked only intermittently.  Today, only a few individuals work the mines from time to time.

Remains of the cemetery are high atop the ridge on the north side of the canyon.

We drove about 40 miles on this day.  We headed north from the Walker River Resort to Ludwig Mine.  Afternoon brought some rain so it cut our adventure short by a few hours.

Near the Homestake Mine – We climbed near the top of Shamrock Hill trying to find a Geo Cache.  Did not find the cache, but we did have some great views.

Canyon from Homestake Mine over to Delphi Springs

In this area of the state, copper was extensively mined, and Ludwig is no exception. Copper ore was discovered in the mid 1860’s and produced for a couple of years, but they didn’t have much luck smelting it until after the turn of the century when the Nevada-Douglas Company bought the mines in 1907. Almost a thousand people lived and worked at Ludwig until 1914, when activity waned. They began mining gypsum in the 1940’s but by 1960 most everything was gone.

The train would go from Wabuska to Yerington and Mason, down to Nordyke and Wilson, then swing through Wilson Canyon and head north on the other side of the range to Hudson, Colony, and Ludwig.

There are lots of open mines that can be very dangerous.  Please be careful when exploring these areas.Man dies after falling down mine shaft – Nevada Appeal, October 2008

Today we headed west over to the Pine Nut Mountains.  We traveled up Rickey Canyon off of Upper Colony Rd., just north of Wellington.  We climbed about 4,000 feet, but then ran into snow about 8,700 feet and had to turn around.  This is a great trail with spectacular views of Smith Valley.

About the Pine Nut Mountains – The Pine Nut Mountains take their name from the Pinyon pine that dominate the slopes between 5000-7000 ft. The range starts in the north at the Virginia Range. They continue south for approximately 40 miles where they join with the Sierra Nevada near Topaz Lake and Leviathan Peak (near Holbrook Junction). They are bounded on the west by the Carson Valley and to the east by Mason Valley.

After heading back down the canyon, we went southeast into the Toiyabe National Forest just east of highway 338.

Southeast of Wellington in the Toiyabe National Forest

Walker River Resort has over 100 RV sites, many with water, sewer and electric.  The resort borders BLM land with thousands of miles of OHV trails, and you are allowed to ride your OHV in and out of the camping area. 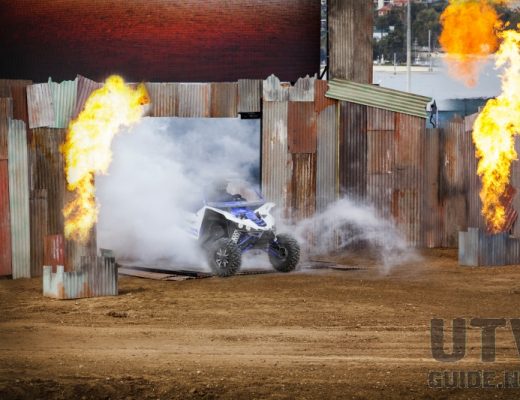