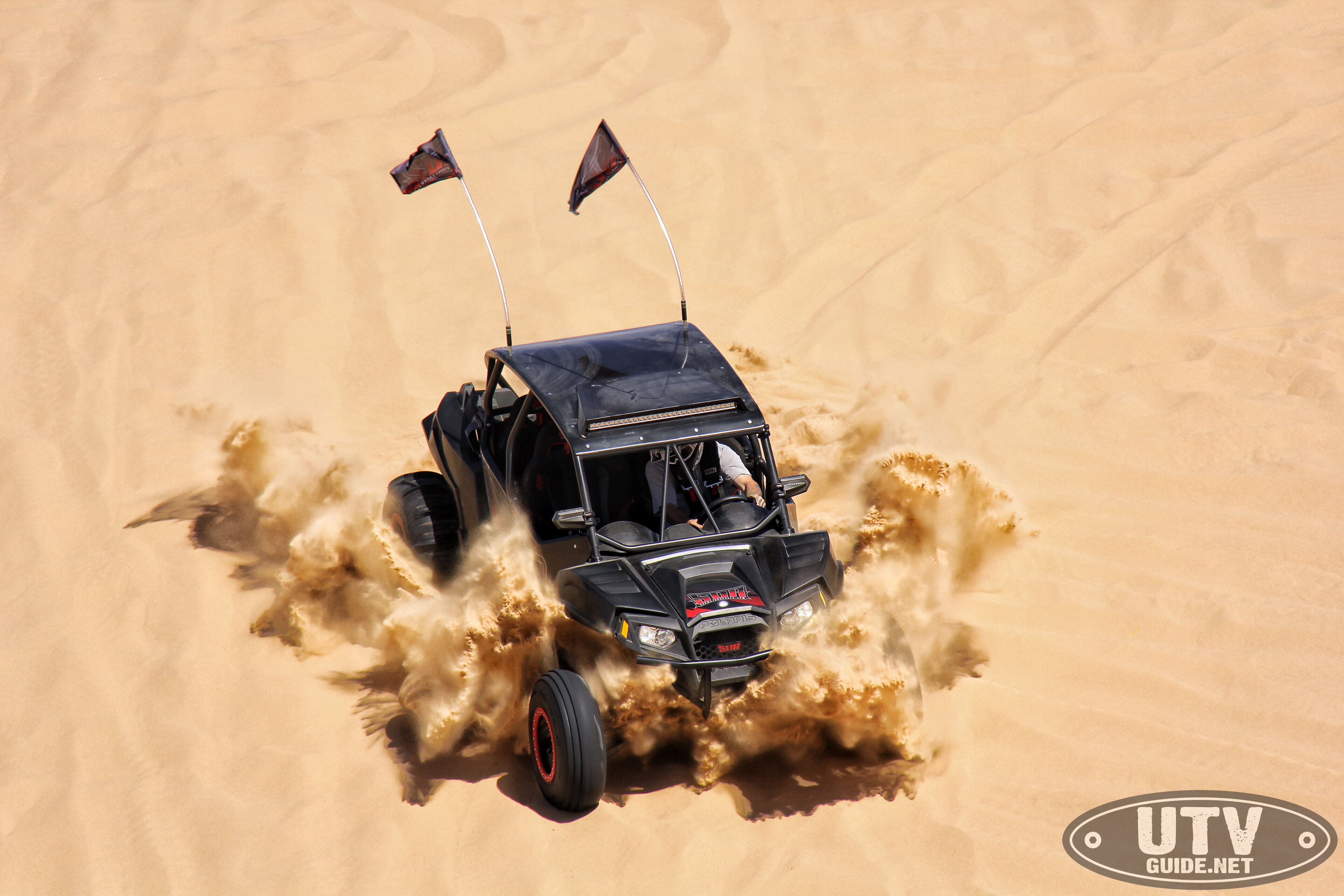 The Second Annual UTV Industry Ride descended on Glamis on February 28 to March 3, 2013. This is a chance for industry and media to get together in the dunes to show off the latest and greatest toys, go on fast rides and tell stories around the campfire. We all camped at the Glamis Beach Store near Glamis Flats and I brought I 2013 Polaris RZR XP and my 2012 Arctic Cat Wildcat. I had recently raced my RZR XP to second place in the King of the Hammers UTV Race, so it was neat to take it to the dunes and show off its versatility.

I arrived Wednesday night and the crew from Muzzys Performance were there with dinner waiting.  How cool is that?! It was hard to complain too much about my 12 hour drive when the Muzzys crew had a 18+ hour drive, but I was still beat after the long drive.  We all crashed early and I was eager to get unloaded and setup in the morning.

Morning came quick and after leveling the motor home and unloading the trailer we were ready for a quick ride. The dunes were super smooth, but there were plenty of steep slip faces to keep an eye on. We made our way over to Osborne Overlook, then to Oldsmobile Hill and back to camp. Kind of a nickel tour for the guys at Muzzys that did not have the lay of the land.  By that time, Dave from Fullerton Sand Sports had arrived, and more were on their way soon. By evening, a solid crew had arrived including Neal from Neal Rideout Photography. I have been following Neal on Facebook and in Sand Sports Magazine and have admired his work. After dark, Neal wanted to try some night time action shots and we had some willing participants. We headed out to the baby dunes near Glamis Flats and found a small jump. I normally prefer to be behind the lens, but don’t have any skill with low light photos, so I was happy to be the remote flash holder and soak up the whole process. WORCS racer Ryan Piplic had arrived with his Cognito Motorsports built RZR XP and I figured he would be the best to air it out in the dark. Neal got some really cool shots and after everyone had a shot at the jump, we headed back to camp for the night.  A steady stream of people came into camp through the night and I knew we’d be busy.

Neal and I packed up and headed out to the dunes near Oldsmobile Hill to setup for some action shots and we had a steady stream of UTVs that headed our way.

After a few hours of shooting, we headed back to camp to relax and wait for better light in the afternoon. Camp had grown since we had left and after lunch, we gathered up a good crew to head out on a big ride.  We made it to Osborne Overlook and took a break.  Neal scouted for a good spot for a jump shot, and it didn’t take long to twist the guys from TMW Off-Road to take the bait. After the huge air, we did a little riding in the big bowls nearby while Neal and I got some shots.  Then several of us went on a fast ride to Oldsmobile Hill. One of my favorite parts of the Industry Ride is going on fast rides through the dunes like this.  Super fun to chase the rabbit up front while dicing it up with other people in the industry.

That night we headed over to Glamis Beach Store for pizza and to tell stories about the day.

Saturday we organized a big ride over to Oldsmobile Hill, then to Gecko Rd. and over to Osborne Overlook.  The stories of the big jump had spread through camp, and a few others  wanted to give it a try.  I was more than willing to bust out the camera for big air!

After a run back to camp and a few more photo shoots, we all made a run over to Gecko Rd. for the sand drags. We busted back to camp and got settled in for a catered taco dinner, cocktails and more stories around the campfire. By morning, most had packed up and headed for home.  It was a great weekend of riding and camaraderie. The UTV industry is on fire.  From manufacturers continuing to increase performance and suspension to the aftermarket companies building awesome products, it is a very exciting time to be part of the UTV market.

Throughout the weekend, I was continually grabbing guys to go get some photos of cool UTVs.  Here are some of them.