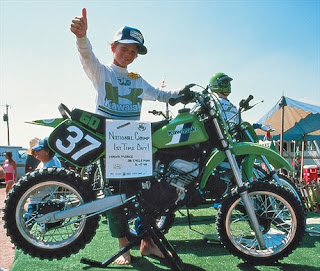 Irvine, Calif. (July 28, 2011) – When the program began in 1981, Monster Energy Kawasaki Team Green’s™ primary objective was to provide on-site race support to anyone riding a Kawasaki. For their amateur racers, the objective set forth was simple, to have fun and do their best. The ensuing effect resulted in Team Green cultivating more amateur national motocross championships than any other amateur race team in history. From the AMA Winter National Olympics to off-road races that wind through the deserts of Baja, Mexico, Team Green riders have continued to dominate wherever they compete. Although the program has grown in many ways, and changed several times throughout its lifetime, the recipe for success remains the same.

By 1983, Team Green had already positioned itself as the premier amateur motocross race program in the world. With an ever-increasing contingency payout program, some of the biggest names in amateur motocross were already earning their stripes aboard green bikes. At the 1983 GNC National championships, Team Green riders won every 60cc and 80cc class championship, walking away with a total of 12 championships across all classes. At the AMA Winter National Olympics, Ward captured the Bronze Boot award on his KX™80 after four days of impressive riding over four different disciplines. By the end of the 1983 race season, Team Green riders Ward, Warren, Todd Benfield, Kyle Lewis, Jason Prater, and Todd Campbell had each earned an AMA National No. 1 plate.

As each year passed, Team Green continued expanding its reach and filling its trophy cabinets. By 1985, the number of Kawasakis at a typical amateur event had grown from a 10 percent average to more than a 50 percent average. Kawasaki bikes made up 63 percent of the total entries at the NMA Nationals in Ponca City, 52 percent of the total entries at the GNC Finals, and more than half of the field at the Winter National Olympics, which saw 595 green bikes sign up for competition. Within a two-week span, Team Green riders netted a total of 30 national championships between the AMA and NMA amateur national events. Riders like Jeff Matiasevich, Hank Moree, and Lowell Thomson were racking up the motocross wins while Jimmy White and Chris White were taking the Kawasaki KXT250 Tecate® ATV to the top of the podium in three-wheel racing. Team Green also recruited its first international member, Pedro Gonzales, from Monterrey, Mexico, who won the 83cc Modified Novice 12+ class at the NMA Nationals the same year aboard a KX80.

Recognizing their amateur racers would eventually become professional racers, in 1985 Team Green expanded its program again to include Team Green Pro Support. The program was designed to give amateurs an extra year to mature and to ease their transition into the pro ranks. The same year, in the Pro-Am Supercross Championship series, Team Green’s Warren scored the 125cc East class championship aboard his KX™125, with teammate Rodney Barr finishing close behind in second. In addition to Team Green’s success in the Pro-Am Supercross series, Kawasaki pro rider Jeff Ward won the Supercross class championship aboard his KX™250. Team Green’s Matiasevich was also gaining a reputation on his KX125, racking up championships at the amateur national events.

Each year as more Kawasaki bikes populated race tracks around the nation, their contingency purse grew as well. By 1987, Kawasaki’s contingency program was offering more than $1.1 million in payouts, the most prize money ever offered by any motorcycle manufacturer to that point. The same year also marked Kevin Windham’s induction into the Team Green ranks. Aboard his KX™60, Windham went to work at the GNC finals, taking home the Mini-Mini Junior class championship and his share of the contingency payout.

In 1987, Team Green expanded once again, into the off road racing world. In Kawasaki’s SCORE Baja 500 debut, Team Green’s Larry Roeseler and Ted Hunicutt Jr. piloted their KX™500 through 500 miles of Mexican desert putting the only Kawasaki entered in Class 22 (motorcycles over 250cc) into the winner’s circle. Later that year, Hunicutt Jr. and Brett Howell did it again, winning the SCORE Baja 1000 aboard a KX™250WR, and gapping the field by more than 30 minutes. Kawasaki Team Green went on to win the next nine-consecutive SCORE Baja 1000 races with the help Roeseler, Hunicutt Jr., Ty Davis, Paul Krause, Danny LaPorte, Danny Hamel, and Paul Ostbo.

During the 1980s some of the future’s biggest names in motocross joined the Team Green program and also grabbed their share of championships. This decade saw a plethora of talented riders earning their stripes on the amateur circuit with Team Green. Riders like Jeff Emig, Mike Kiedrowski, Ezra Lusk, Ron Tichenor, Keith Turpin, and Denny Stephenson all graduated the ranks of Team Green before moving on to become successful professionals and some of the most recognizable names in the industry.

Although Team Green has gained the most notoriety for its success in motocross, it has also found success across the racing world. It began branching out in 1985 with White piloting the Kawasaki Tecate®250 to two championships (’86 and ’89) in the Mickey Thompson Stadium Series. Mike Penland proved four-wheels can do better than three, capturing several Utility ATV class GNCC championships, two Olympic ATV championships, and four championships in the SCORE Baja 1000 aboard his KVF™650.

By 1998, Team Green entered into the world of drag racing with Rickey Gadson, who quickly made a name for himself aboard the Kawasaki Ninja®. The most accomplished drag racer in AMA Prostar Drag Racing history, Gadson has captured nine world championships aboard a Kawasaki ZX™. He also recently posted two new land speed records at more than 200 mph aboard a Kawasaki ZX™-10R, and shows no signs of slowing down anytime soon.

Team Green’s dynasty continued to flourish throughout the 1990s as the team produced motocross superstars almost like a factory. Many Team Green riders who saw immense success through the 90s, and through the millennium, went on to became some of the biggest names in motorcycle racing today. Team Green’s all-star roster included icons like Jeremy McGrath, Rickey Carmichael, James Stewart, Timmy Ferry, Damon Huffman, Windham, and Ryan Villopoto. Most of these riders spent many years training with Team Green before moving on to professional careers.

For the full story and vintage photos click here. 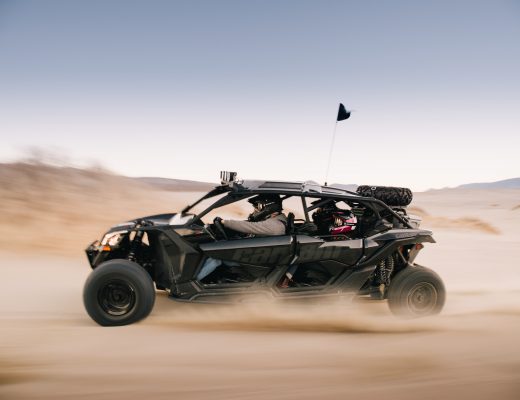