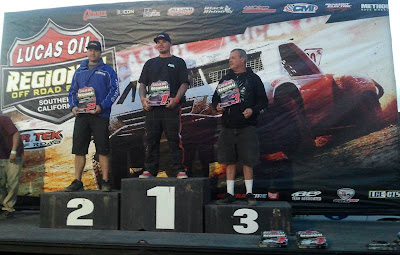 Chandler, AZ (March 12, 2012) The first round of the newly formed SR1 Championship Series started off in a big way at the Lucas Oil Regional Off Road Series event held at Glen Helen, CA this past weekend.  Fourteen SR1s took to the track for Saturday’s main event, combining racers from both Arizona and California in a race that was sure to deliver some great competition!
With Black Rhino Performance offering up $50 cash to each UTV racer that came out and raced, combined with Weller Racing’s $1000 cash purse, motivation to attend was at an all-time high, and the full field proved that there are plenty of SR1 racers out there who are looking to mix it up with the best of the best.
“When LOORRS told us they weren’t going to have UTV’s in 2012, my wife and I immediately started thinking of a way to make sure the SR1 class didn’t die out.” says Jason Weller, owner of Weller Racing.  “We also wanted to come up with a way for all of the SR1 racers to be able to race together, instead of just racing the regional events in their own states.  This “series within a series” sounded like it would work, and with the turnout we just had at round one, I think it’s safe to say this year will be a great one for the SR1 class!”
Weller Racing, in cooperation with the Arizona and California Lucas Oil Regional Series’, worked out a schedule that would not only allow any SR1 racer to compete for championship points in the SR1 Championship Series, but it would also allow any racer to compete for the championship within the CA and AZ Lucas Oil Regional Series’ as well.  “With the schedule we worked out, it’s actually possible for a racer to get two championships in one year, which would be pretty awesome.” adds Jason.
With a full field of SR1s on the track, the competition for round one was pretty intense, and amidst plenty of contact and passing for position, the first winner of the SR1 Championship Series emerged as Jimmy Fishback crossed the checkers in first place, just ahead of Jason Weller, who challenged Fishback for the entire race but just couldn’t get the advantage, settling instead for a second place finish.  Coming in third was Gary Thompson, who rallied back after a midstart pack, and was putting the pressure on Weller by the time the checkers flew.
True to their word, Black Rhino and Weller Racing made good on their cash payouts, and every UTV racer went home with at least $50 in their pocket.
Round two of the SR1 Championship Series will be held at Speedworld Offroad Park on May 5, as part of the AZ Lucas Oil Regional Series event.  Cash purses will be provided by a new sponsor every round, so look for updates before every race at www.sr1championshipseries.com. See you at the races!
About the SR1 Championship Series:
The SR1 Championship Series was created to be a “series within a series”, and give SR1 UTV short-course racers in AZ, CA, and NV a way to compete together, without giving up their race for a championship in their own local Lucas Oil Regional Series.
2012 Race Schedule
Race 1. – March 10, Glen Helen Raceway, San Bernardino, CA
Race 2. – May 5, Speedworld Offroad Park, Surprise, AZ
Race 3. – July 21, Lake Elsinore Motorsports Park, Lake Elsinore, CA
Race 4. – October 14, Firebird Raceway, Chandler, AZ
Race 5. – November 10, Las Vegas Motor Speedway, Las Vegas, NV
About Weller Racing, LLC:
Weller Racing has been at the forefront of development, testing and building some of the fastest performance motors in the UTV industry since 2006.  Based out of Chandler, AZ, Weller Racing provides custom UTV and ATV products for a worldwide client base, and is an established name in the world of short course off-road racing.  Duners, recreational riders and racers alike have counted on Weller Racing to provide them with countless hours of fun, and repeated trips to the podium.  For more information, visit their website at www.wellerracing.com, or call 480-507-4771.