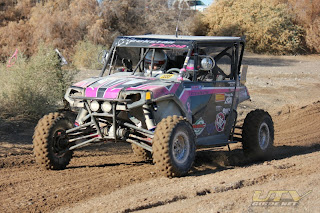 The Rockstar Racing Girls lined up 21st of 22 UTVs. It’s a little nerve racking waiting for our turn to take the green light. But as the light turned green the nerves went away and we were off chasing all 20 UTV’s in front of us. Dust was minimal, the sun was blinding but we had work to do! We caught the first car just as we left the watered portion of the track. Passing them with ease we set off after the next set of lights in front of us. We passed a few more, saw a few off the course with problems. We made to to midway pit with no problems. We drove through slow and the crew gave the car a once over. With the thumbs up we were out of there onto the smooth gravel road. We were wide open in clean air!

Somewhere in the high speed washouts we hit a big one that I didn’t see coming. We hit it hard! The car felt okay so we raced on, and then discovered that our intercom was no longer working but we still had radio contact with the crew so hand signals were in order! The steering began to feel a bit off. We thought maybe we had a low tire but it didn’t slow us down much. We pushed on with the 1911 Gator in our sites. They were running so well! We had a hard time catching them! We did finally get around the Gator and headed into the Python! We had a blast shooting around the berms and over the jumps (lumps is more like it. They need to put some lip on those for us!). We pulled into the Main Pit for fuel and let the crew chief know what we were feeling. He saw it before we could tell him. We had hit a big rock in that washout that pushed the passenger front a-arm back and into the frame. It also broke the cross over tube. All fabricated from chromoly, so you know how hard we hit that! The crew chief told us that it was bent, we had a bunch of tow out but it would hold. We took off hoping to hold our position with the steering a little out of control at high speeds and difficulty turning right. We made it to Midway Pit. We stopped so the crew could ensure that nothing had changed and we charged off! We passed a few more cars off the side of the road. We were just cruising when we saw that Gator in our rear view mirror! We knew we had to save the car, but we also wanted to hold our overall position. We took off keeping them in our dust. They caught up to us several times but we were able to hold them off. As we passed through the rock garden, to our surprise the 1991 Jagged X sportsman car off the road with a flat and no spare! Woo hoo! We were now 1st in class. We pushed harder, hoping the a-arm would hold out for 20 more miles. We did it! We crossed the line 1st in sportsman and 6th overall with a broken a-arm! We couldn’t be happier with the results. 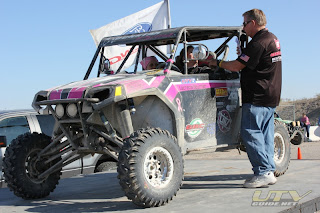 Our little Polaris 800 RZR did us proud! Special thanks to my most awesome co-driver Corina Fallon for her superb hand signals! Her ability to read the track and remember the course are truly amazing. Thank you to my crew chief and husband Eric. We would not be here at all without your fabrication skills and patience with me! Thank you to my crew: Gill Fallon, Preston Alexus, Cory, Matt and thank you to the 1989 crew that helped out in our pit at midway. It is appreciated and did not go unnoticed.

Thank you to our sponsors: GBC tires- this was the 4th race on this set of tires and no flats!, Tire Balls- no flats!, Parker Oil- your race fuel makes us faster!, RZR Wraps- We still look good!, Rugged Radio- had and intercom problem, but you still kept us in communication!, Joel’s T’s- We always have the best looking shirts!, UTVGuide.net – Thank you so much for all the pictures! Also like to thank our fans! We love seeing you on the side of the track and at the finish line! You keep us pushing on! If there is anyone that we forgot, I apologize and know that you are appreciated. This is a team effort and we have the BEST team out there!