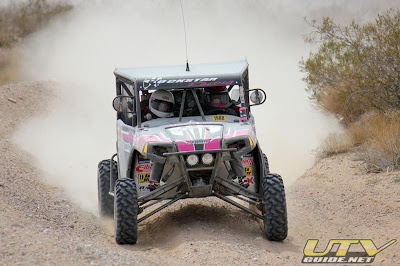 There were 30 UTVs on the start line for the 2012 Mint 400 and we started dead last! We knew we would have our work cut out for us with our 800 RZR and slew of 900’s. Though we were racing sportsman, our ultimate goal is to place well overall.  Our plan was to drive smart and pick them off one by one. The day started off well.  We were at a good pace and began passing UTVs. The carnage out there so early in the race was amazing! We passed 5 or 6 UTVss when my navigator became disoriented and thought that we had made a wrong turn somewhere around mile 10. I should have followed my gut instinct, but I followed his and we made a wide turn and ran back (off the course of course) about 2 miles. We began to see the big trucks coming back our way and knew that we were mistaken. We turned around again and headed back. Some guys in a broken Trophy Lite were nice enough to point us back to the track. I’m sure they thought we were complete idiots!

Back on track, we now knew we had to pass all those cars again and make up some serious time! We caught up to them in pit 1. We didn’t pit so we got our spot back and began to work on the rest of the pack. We diced with a pretty fast Rhino in the whoops for a while, but I guess he grew tired of playing of with us and pulled over. We got bumped by Cook and let him go. We later saw them off the side with a problem. We got passed by a few 1800 cars including Robby Gordon. We were trying to pass another RZR and came to a big silt berm. He barreled around both of us and went into the berm throwing a huge cloud of silt. It was slow motion as we watched it come at us and then it was lights out! We finished our pass on the RZR, wiped our shields clean and motored on. We were banging on the rev limiter across the lake beds, hit pit 2 and waved to our crew as we went on through. We made it back to main pit for fuel just time as the motor started sputtering! I’m sure our detour out there messed up our fuel mileage. They fueled us up and changed a rear tire. We didn’t even know it was flat! The crew told us that we now in the top 10, which was all I was hoping for with the big fast UTVs out there! 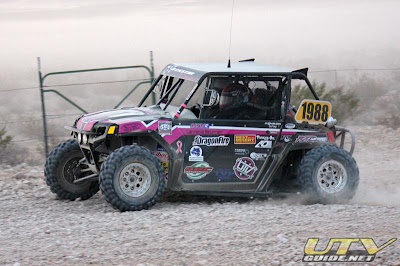 Happy about that, we changed co-drivers and headed back out. We soon found out that her headset was giving gobs of feedback and we could not communicate. Bummer, but she is great with hand signals! We passed a few UTVs with problems on the side of the road and began to get a bunch more 1800 traffic. They were very polite and patient. At one point I pulled up on a tall embankment to let them go and I don’t know if we slid down or they came over a little early but we have a nice swipe on our driver door! No harm, no foul, we kept pushing. The crew called and asked us to stop in pit 2 for a splash of fuel and wanted to change that rear tire again. Weird I thought. Turns out they had given me a tire without tireballs, but didn’t want me to know so that I wouldn’t change my pace! To help ensure we would make it to the finish line they wanted a tireball laden tire back on the car!! We kept a good fast pace, dicing with Bobby Rabar in the rough stuff, and then he would blow by us on the flats. Man, that car makes a lot of dust!. As we headed in to the finish, he came up behind me again. I though it was a bigger car and let him go. If I would have known it was him, I would have tried to keep him back there for a better overall finish. I did give him a friendly wave as he dusted me out again; I hope he has no hard feelings about that! 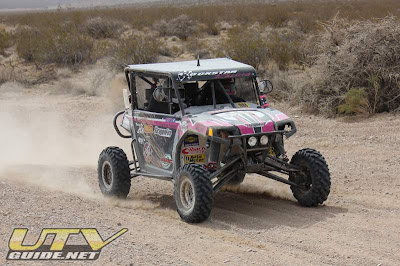 We crossed the line at 5:16. Good enough for a 1st in class and 4th overall!!!  Thank you to my husband, Eric, for building us such a tough car. Thank you to my crew for their fast pit stops! My son, Trevor, for putting up with his mom racing! Thank you to our newest sponsor, Dragonfire Racing! We are hoping for even better things to come!. Thanks to DragonFire Racing, GBC, Tireballs, AO Coolers, Parker Oil, Joels T’s, Rugged Radio, RZR Wraps, Fox Shocks, Turbo Resource and Hilgers Trucking! We absolutely can not do this without all your support! Thank you to my fans! I love you all! Special thanks to Joey, Rusty, Wally, Jon and all the other media for the great photos!!!! We can’t wait to see you all again!

STI HAS YOUR BACK AT 2013 DIRT SERIES