Friday Qualifying:
The final class on the track for qualifying was the UTV class. Chad George only needed three laps in his Funco/King Shocks Kawasaki to take the pole position, and he bettered his personal best time in each of these three laps. George eventually ended up with a best time of 1:03.213, taking his second pole of the day! Austin Kimbrell took second place today in his #607 machine, setting a personal best time of 1:03.900, while young RJ Anderson took third with a best time of 1:04.083 in his #637 Walker Evans Racing Polaris. Robert Vanbeekum wound up fourth in his #664 with a time of 1:04.859, and Mark Holz rounded out the top five in his #673 Holz Racing Products machine, setting a time of 1:04.950.

Saturday Race:
The #639 of Kenny Bates and the #673 of Mark Holtz had the front row starting positions for today’s UTV race thanks to a six position inversion of yesterday’s UTV qualifying results, but it was Austin Kimbrell in the #607 Xtreme Machine and Fabrication machine who got by both these guys to take the early lead. RJ Anderson spun in turn four and collected some of the frontrunners in the process, and Robert Vanbeekum was black flagged for an early incident, making for an action-packed first lap. With one lap in the books, Kimbrell was the early leader, and was followed by Holz, Bates, and teammates Chad George and Tyler Winbury. George moved up to the third place in his #624 Funco Kawasaki on lap two, and young Winbury took over fourth place in his #694 Beard Seats Kawasaki on the following lap. As the competition yellow flag came out, Kimbrell still led over George and Holz, with Winbury and Bates sitting fourth and fifth. Winbury pulled off the track on the yellow flag lap, which moved Anderson’s #637 Walker Evans Racing Polaris up into the top five. As the green flag flew again, it was Vanbeekum who’d made the biggest move, pulling into third place behind Kimbrell and George. Anderson then pulled off the track, and Corry Weller’s beautiful-sounding Yamaha R1-powered Ranger, which she was driving only as an exhibition of the new SR1 UTV class, moved into fifth spot physically after starting dead last. With just one lap to work with, Vanbeekum, who’d worked his way clear through the field after being black-flagged early on, made up some huge ground to pass both Kimbrell and George to take the lead and the win! Kimbrell and George, who must have been somewhat dumbfounded, ended up in second and third places, with Holz’s Holz Racing Products machine taking fourth and Roger Stokes rounding out the top five in the #657.

The first race to run on the full-length track today was the UTV race. This morning’s pole winner Chad George had to settle for an eighth place starting position thanks to a four row inversion, while Tyler Winbury and Mark Holtz started on the front row. Holz took the early lead in his #673 Holz Racing Products Polaris, ahead of Austin Kimbrell, yesterday’s winner Robert Vanbeekum in the #664 Xtreme Machine and Fabrication Kawasaki, George, and Roger Stokes. Kimbrell moved his UTV Underground Kawasaki into first, and Vanbeekum and George also passed early leader Holz to take over second and third. By the time the competition yellow flag waved, RJ Anderson had also moved his #637 Walker Evans Racing/Goodyear Polaris past Holtz, and after the restart, he briefly stole third spot from George before George got that position back later in the same lap. Vanbeekum then pulled off the track and out of the race, allowing Stokes to move his #657 HRT Motorsports machine back into the top five. On the final lap, Anderson made an unbelievable desperate run through the moguls to pass both Kimbrell and George to take the lead! However, Anderson somewhat overshot the turn at the end of this section, and Kimbrell was able to retake the lead and hold on for the win. Anderson managed to hang on to second place, ahead of George, who took third in the #624 Beard Seats/King Shocks Funco. Rounding out the top five were Holz and Stokes.

Fun-Filled Weekend Ahead in Vegas Ahead 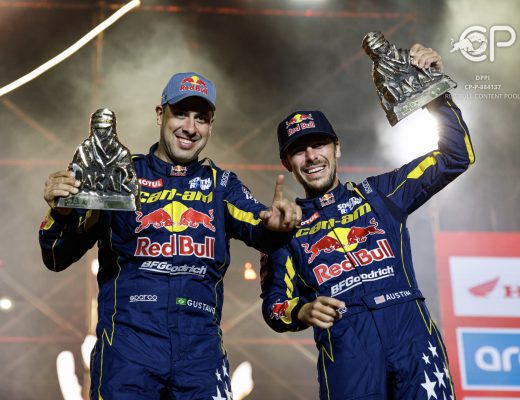