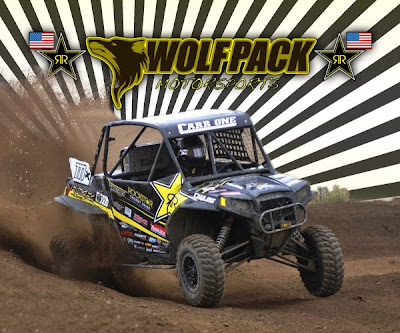 Newport Beach, CA – The Rockstar Energy / Polaris UTV Wolfpack ventured out for a double header weekend with back to back events, one race on Saturday and another on Sunday. The highly competitive Wolfpack went all out and finished the weekend off with impressive results. Round two of The Lucas Oil Regional Off Road Series at the Lake Elsinore Motorsports Park turned out nearly 30 Polaris RZR’s. The Wolfpack is extremely proud of the Walker Evans Polaris RZR class as the the team was heavily involved in the 2012 petition to bring the division to the Regional Series.

The Rockstar Energy, Polaris backed Wolfpack team rolled up their sleeves and got to work in this past weekend’s race action.  Bryan Carr, Jordan Cochrum, Jason & Jeremy Merrell laid down some top qualifying times setting them up for front positioning in the finals. The Merrell brothers had some bad luck with a couple rolls setting them back a few spots off the podium. Jordan Cochrum of Rockstar Energy, experienced near overheating issues with just two laps to go.Jordan explains, “I was really happy with my first race back in the car since last season. The car did its job and I was really impressed with how the new 2013 Polaris RZR XP 900 performed. I had an early run in with some extra mud packing my radiator starving the car of air. Fortunately, Polaris thought ahead adding the automatic safety limp mode keeping my car from totally overheating and blowing a motor.”

After the action from the regional event, Bryan Carr, from Carr One Fabrication, and Jason Merrell would work hours into the night getting their cars ready for the second day of racing at the Dirt Series in Perris CA. Jason Merrell, racing his stock Polaris 900 RZR in the 1000 unlimited class placed an impressive 2nd place in the first heat and 1st place in the main.

Bryan Carr and Jeremy Merrell entered a second race in the Production 1000 class where they ran their UTVs hard and wide open. Bryan Carr explains, “The hole shot on these courses is the key to getting the edge on the rest of the field.” The Polaris 900 RZR pushed fast and strong moving the Wolfpack up front. Jeremy Merrell suffered a hard impact from another driver causing him to flip. Race fans assisted Jeremy pushing him back on 4 wheels to go on and finish the race. Bryan Carr would bring his Polaris RZR across the finish line in 2nd place bringing the Rockstar Energy / Polaris UTV Wolfpack another two main event podiums for Round 2 of the Dirt Series.

U.S. Probes Off-Road Vehicles After a String of Accidents