“We are pleased to report first quarter 2009 results in-line with our expectations,” stated Scott Wine, Chief Executive Officer. “Despite a difficult retail sales environment throughout the quarter, our team performed exceptionally well in executing our plan which resulted in an increase in our gross profit margin percentage of 180 basis points while maintaining a strong balance sheet. We were able to expand our gross margin percentage in part through our flexible manufacturing and variable cost structures which helped offset the impact of the unit volume declines experienced during the quarter. We once again achieved market share growth in our off-road vehicle business, which contributed to our ability to further decrease dealer inventories for the quarter compared to the prior year first quarter. As we committed to do throughout the year, we continued to prudently manage operating expenses and adjust production levels to match retail demand. While net income for the quarter was negatively impacted by a non-cash impairment charge of $0.18 per share related to our KTM investment, operating income, before income from financial services, declined proportionately with sales demonstrating our ability to react nimbly to the weak economic environment.”

“While the outlook for the remainder of 2009 remains challenging, we continue to proactively take steps to streamline our business and optimize our cost structure. Moreover, our strategic initiatives are beginning to gain traction and positively impact our results,” continued Mr. Wine. “Going forward, our strategy remains unchanged; we will continue to leverage our innovation, speed to market and flexible manufacturing capabilities to gain market share while focusing on improving our operating margins. The economic climate remains uncertain and we are cautious about the near-term demand environment. As such, we are maintaining our full year 2009 sales and earnings per share guidance.”

Retail credit financing availability for Polaris consumers Availability of retail credit financing sources is important to Polaris customers’ ability to purchase the Company’s products. Polaris has relationships with HSBC Bank (“HSBC”), GE Money Bank (“GE”) and more recently Sheffield Financial (“Sheffield”) to provide retail revolving and installment financing credit to United States consumers. During the first quarter 2009, 44 percent of consumer retail credit loan applications from Polaris customers were approved by either HSBC, GE or Sheffield, below the fourth quarter 2008 approval rate of 51 percent; and 31 percent of Polaris retail customers in the United States financed their Polaris product purchases through HSBC, GE or Sheffield, which is consistent with the fourth quarter 2008 penetration rate. While the first quarter 2009 approval rate declined from the fourth quarter 2008, the Company believes that the reduction in the general availability of retail consumer credit has not been the primary driver of the decrease in sales. The consistent availability of retail credit alternatives is expected to remain uncertain throughout 2009 but the Company remains optimistic that retail credit will be accessible for Polaris consumers with an acceptable credit history.

Snowmobile sales decreased 13 percent during the 2009 first quarter compared to the prior year’s first quarter primarily due to the weak economic environment. The initial reaction has been positive from dealers, consumers and the industry publications to Polaris’ recently introduced RUSH snowmobile for model year 2010, which has an all new PRO-RIDE chassis that provides terrain dominating control and a smoother ride through all types of terrain. Season-end North American dealer inventories of snowmobiles are at acceptable levels.

The non-cash Impairment charge on securities held for sale recorded in the first quarter 2009 was $9.0 million, pretax, or $0.18 per diluted share. During the first quarter 2009, the Company determined that the decline in the market value of the KTM shares owned by the Company was other than temporary and that the market value currently reflects the fair value of the investment and therefore recorded the decrease in the fair value of the investment as a charge to the income statement as of March 31, 2009.

About Polaris
With annual 2008 sales of $1.9 billion, Polaris designs, engineers, manufactures and markets off road vehicles (ORVs), including all-terrain vehicles (ATVs) and the Polaris RANGER, snowmobiles and Victory motorcycles for recreational and utility use. 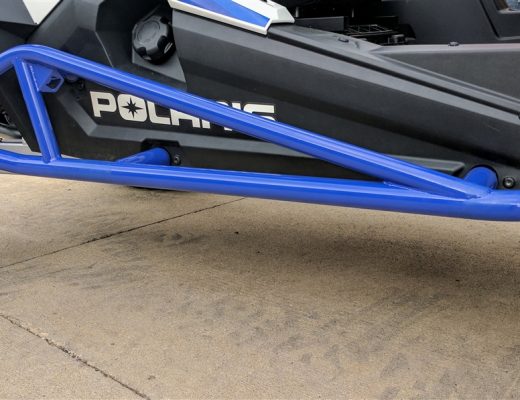