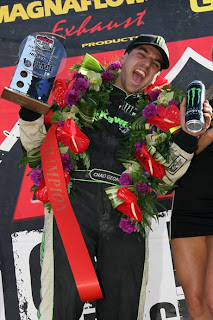 Irvine, Calif. – Monster Energy/Funco/Kawasaki’s Chad George ended his championship season on top with his fourth victory of the year at the Lucas Oil Off Road Racing Series finale at Firebird Raceway in Phoenix, Ariz. George fought all season with Monster Energy Kawasaki’s Austin Kimbrell, who finished second in the championship standings. In all, the Kawasaki Teryx® won all but two races in the 15 race series, with multiple riders taking victories.

Another Championship
With his experience leading the way, George went into the final round of the season confident he could bring home his fourth title. After a decent qualifying session, George proved he was a worthy champion as he earned his fourth win of the season.

“The feeling of winning a championship never gets old like some people might think,” said George. “This year was the hardest I had ever worked to get a championship, which makes it much sweeter. Our team definitely fought back from a lot of ups and downs and I think in the end, our experience showed. We didn’t panic when we weren’t first. The team has been amazing and being able to give back to Kawasaki really feels good.” 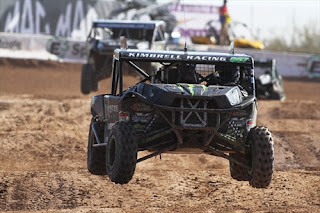 Very Close
Although he didn’t win the championship, Kimbrell still finished the year better than ever before. With all the knowledge gained this year combined with his obvious talent, Kimbrell already has his sights set on the championship in 2011.

“My weekend wasn’t great, but overall we learned a lot,” said Kimbrell. “Every year is a learning experience and I’m ready to get back to work. We will hopefully be able to do more testing in the off-season which will help us from chasing a set-up during the race weekend. I had fun this year and it makes me excited for the 2011 season to start.” 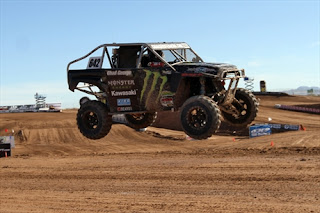 Teryx Winners
The powerful Kawasaki Teryx was proven to be the RUV to beat on the LOORRS circuit. The machine won 13 races with Kimbrell taking five victories, George with four, John Dempsey with two, and Robert VanBeekum with two as well.

“In the three short years that Kawasaki has been involved with short course racing, we’ve proven the Kawasaki platform not only with three championships in a row, but by changing the field. It once was a small percentage and now is the majority of the field. Kawasaki is proud of every single one our racers.”

Photos: Professional drivers are on a closed course