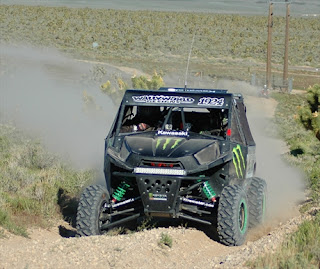 Riverside, CA 5/1/11 – Lasher Motorsports continued on their quest for a points championship in the Pro UTV class at the Best In The Desert (BITD) racing series this past weekend in Las Vegas, NV. Coming off a 2nd place finish at the Parker 250 back in January Lasher Motorsports had adequate time to prepare for the 2nd race of the season, the Bilek Silver State 300. Mike Lasher and his Monster Energy Kawasaki / Lasher Motorsports Team overhauled their Kawasaki Teryx in preparation for the remainder of this long and grueling desert racing series. Many test sessions were conducted on the # 1924 Teryx to ensure the Pro UTV was at its best.

During the break between the first and second races Lasher Motorsports and their engine sponsor Muzzys Performance hooked up to strengthen the UTV’s power plant. A powerful Muzzys 916cc Kawasaki V-Twin was installed and its benefits were quickly noticed during the ensuing test sessions. With the Walker EvansRacing 2.5″ shocks on Xtreme Machine & Fab suspension tuned and ready this Teryx and its team were prepared for the Nevada Desert. The team also installed Billet King’s rear brake kit allowing them to have the confidence of being able to stop their Teryx in the corners and out brake the competition.
The Bilek Silver State 300 would find Mike Lasher and team drawing the 6th starting position out of 17 UTV’s entered to participate in this 300 mile desert race. Starting in Alamo and finishing just south of Alamo the course would loop through some of the most rugged and beautiful terrain the Nevada Desert has to offer. Sharp rocks and soft silt would all be in the way of competitors reaching their goal of a podium finish and a 1st place win!

Once off the line Mike and his co-driver Pete Negrete would quickly make work of the first 3 cars in front of them bringing them to the front of the pack to battle with the 2 other point’s leaders in the series. This battle would be waged clear trough to the checkered flag which would wave for the #1924 about 7 hours after their start. The Monster Energy Kawasaki / Lasher Motorsports Teryx would run a flawless race in the power train and suspension department. 3 trackside flat tire changes would be the only thing slowing them down on the day as the IRC tracker would show the #1924 and its powerful engine reaching speeds in the 70mph range multiple times throughout the race. Pit stops were quick and efficient.

Pit 4 which was located at RM162 would be where Mike would turn the wheel over to long time teammate Rick “Wally World” Wallace who would bring the Teryx across the remaining 150 or so miles to the finish. Co-driver Pete Negrete would stay in the car guiding both Mike and Wally through the entire race. With only a 12 minute deficit between them and the leader at Pit 6 Wally and the team would make a hard push in the final 60 miles of the race to overcome the time difference. Unfortunately the team would fall just short of a win but would still land on the podium with a very respectable 3rd place finish and another chunk of hard earned series points keeping them in the top 3 for the season.