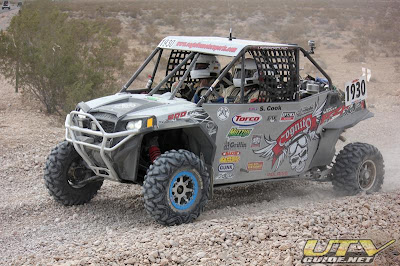 Escalon CA –  Well lets just start from the beginning a little over 2 weeks ago Cook Racing took possession of our new 2012 Polaris RZR Xp4 900 from Polaris Industries, the next day the car went to see Thad at Fiberwerx for a race cage and aluminum work. Exactly one week later the car came back to us and within 4 days my crew chief Jeff Correia and I transformed the vehicle into a full fledged race car. We loaded up the car and we were off to the races last Thursday, but first we made a stop to see Justin and his crew at Cognito Motorsports they worked their magic and in no time had a new Cognito suspension with Fox shocks installed and ready to race. Next stop Vegas…

On Friday we unloaded the car and began our journey down Fremont Street better known as tech and registration. We spent the better part of Friday slowly rolling up through tech. We had the chance to meet with many new sponsors who took an interest in our program.

Saturday morning came very early, 3am. We headed out to the track and prepared for the start of the race at 0600. When the time finally arrived we staged the mighty RZR and before we knew it the light was green and we were off. My co-driver Curtis (5150) Dahmen and I began our adventure into the unknown, the race began with heavy doses of dust so much so that it turned daylight into darkness, as we moved forward we encountered heavy carnage from stuck vehicles to vehicles flipped over to ones that were burnt to the ground. As we settled into our race program which took about 15 miles we realized the true potential of the RZR 900, this car is so fast and maneuverable that we were able to move up through the pack with relative ease. As quickly as we started to move up we encountered our first of 4 flat tires. In our haste to get the car ready for the race we neglected to put a little more thought into our jack situation, let’s just say it was not working out as planned; we spent nearly 10 minutes on each flat. This amount of down time was equal to the amount of time we lost the race by. 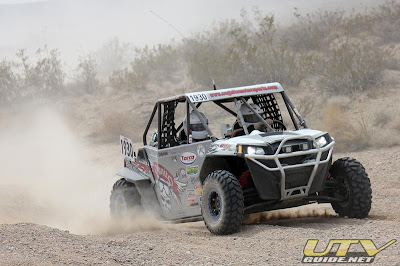 We brought the RZR in after lap one for our scheduled pit stop, the Cognito crew once again jumped into action and completed our service and sent us back into battle, shortly after leaving the pits (about 2 miles) we encountered our 3rd flat. While we were down fixing this one our teammate Dennis Jean slipped by us. Curtis completed the tire change and it was on, in all my years of racing I have strived to compete with Dennis but he was always the faster, well that was not to be today. I drove the wheels off to catch back up and then it happened up ahead in the dust I saw the blue light of Dennis, we worked hard to keep up in the dust and stay on his tail, finally a hand emerged from the window letting me know he knew I was there, we backed off and gave him the time and room needed to allow him to move over which he did. The pass was clean and fast and we were off, the RZR accelerated at a blinding speed and we were heading into check point 2. About 10 miles from the check point we suffered another flat and a broken axle; we changed the tire and decided to limp the wounded RZR into the pit. Funny thing is that before we knew it we were running at 65 mph with a broken axle, amazing. We entered pit 2 and from the advice of the Cognito crew we decided to continue on to the finish. Our speed was good but trying to control a vehicle with a broken axle proved to be quite a challenge, the car kept trying to veer left this was not a good thing. About 5 miles from the finish line our teammate Justin Lambert (Cognito Motorsports) made a clean pass on us in his Kawasaki Teryx. Soon there after we completed the race. Upon entering the finish line area we realized to our amazement that we had pulled off a 5th place finish. As I always tell my team in order to finish first we must first finish…..

RACING FOR A REASON 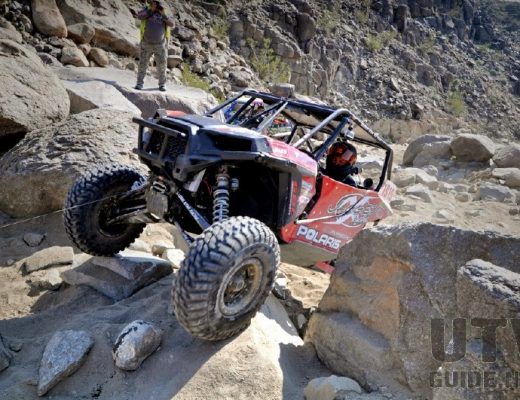