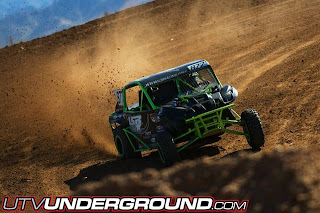 Well, it was yet another tough weekend for the LSR SR1 Team. I am sad to report that we had a really nasty crash in practice on Friday after only putting down 2 full laps. In those short 2 laps, Greg put down one of the fastest lap times of the weekend, and the fastest in the SR1 class for that round of practice. Greg was kind of nervous going into the weekend as he has been battling a cold for the days leading up to the race. But after lap 2 in practice, he was all smiles, and ready to make a strong run for a successful weekend. 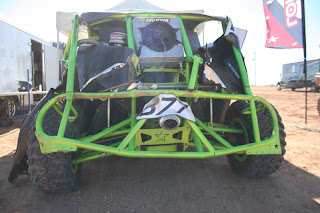 But all those hopes were thrown out the window when the car jumped into the woop section on lap number 3. Greg was pushing it hard, and the car landed in the worst spot possible. There were some deep grooves cut through the length of the woop section. Deep enough than when the car landed partially in that groove, and partially in the face of the woops, the rear part of the chassis cased the face of a woop as the car landed, and shot the back of the car up skyward, causing the nose to catch as it was traveling forward. Next thing you know the car is flipping end over end, flying 10 to 15 feet in the air doing a couple spins before it hit and flipped some more. This went on for about 100 yards as the car slowed to a stop as Greg held on for what has been called the worst UTV crash ever, and easily the worst crash of the entire LOORRS weekend. After looking at the bottom of the chassis, there is a steel plate that joins the main 2 rails together towards the rear end, and it is bent upwards about 2 to 3 inches, and had to have taken the initial impact sending the car into what was ultimately its demise. 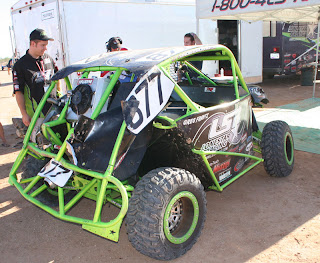 Greg exclaimed, “It started off mild. I remember seeing the ground approaching as the car nosed into the next bump, and feeling the first impact. I was relieved because I thought it was over, as to me it felt like the car had stopped, but then the next impact came, and the next, and I remember thinking, well, this has surpassed the flip in Utah, then things were kind of silent and smooth, then the car just kept bouncing as I felt like a rag doll getting tossed around, feeling the sting of the belts across my lap, then still going I could smell and see coolant spraying out, thinking the brand new radiator was destroyed, and finally coming to a stop sideways, on the driver side door area. I looked down at my hands, and realized I folded over the steering wheel like a taco, and thinking to myself, wow, what the heck just happened?” 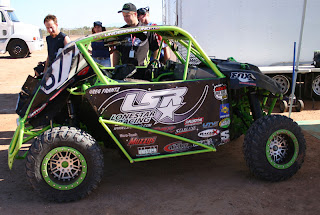 After track crews got the car back over onto its wheels, Greg climbed from the car by himself, and was escorted to the EMT crew to be checked out. After everything checked out ok, they took him back to the pits, and we all got to see the aftermath of this tremendous crash. Thankfully Greg was ok, besides a bruised left foot, and some raspberries from the seat belts across his lap. No sore neck, no sore back, no sore arms or hands. It was amazing that something so violent hardly left a trace on the driver. It’s amazing how the proper safety equipment and seating can really save a drivers life in an incident like this. 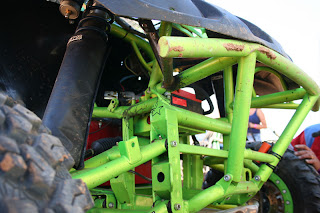 After taking a few moments to look over the car, we realized our weekend was over at this point. Amazingly, not many parts were damaged, as the chassis took 99% of the abuse. The driver compartment held up with zero issues, but the front and rear ends of the car weren’t as fortunate. When we originally designed this chassis, safety was a priority, and we can see that it did its job very well. I will let the pictures do the rest of the talking.

Since Weller Racing’s pit was near the main entrance for all of the spectators, they agreed that we could park the car near their trailer so at least the fans could see some of the carnage and at least get some exposure for our sponsors. The car had a crowd around it for most of the weekend, as Weller was probably wishing he didn’t agree to it, as they were bombarded with questions from spectators. So the weekend wasn’t a complete loss. Sadly, we probably got more exposure with the car looking like a squashed VW bug!

So after another weekend of not getting any points, the chase for the championship is going to be hard to reach. But we will continue to keep fighting. And hopefully the car will be back together for Vegas in early November. Thanks for all of your continued support and best wishes!