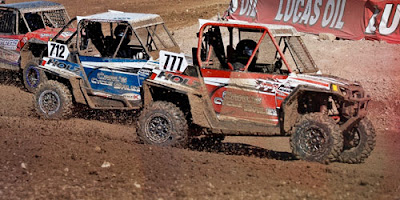 The newly created Stock RZR XP class will focus on budget-minded racers being able to compete in off-road short course racing using the high-performance, two-seat Polaris RZR XP 900 sport UTVs directly from the showroom floor. In order to enhance competition and keep costs down, the only modifications allowed will be mandatory safety cages and optional bolt-on performance items.

For 2013 Lucas Oil welcomes both Polaris and Walker Evans Racing as sponsors of the Stock RZR XP class for the Southern California series. The new racing category, however, will be incorporated into all three of the Lucas Oil regional off-road series, including Arizona and Utah.

Based just outside of Minneapolis in Medina, Minnesota, Polaris Industries is a world- wide leader in the manufacturing and sales of high-performance and utility ATVs, UTVs, snowmobiles and motorcycles. First launched in January of 2011, the Polaris RZR XP 900 quickly established new benchmarks of power and performance for a Side-by-Side UTV. Walker Evans Racing, located in Riverside, Calif., has been a longtime supplier of snowmobile and UTV shock absorbers to Polaris, as well as being a team owner and sponsor of championship-winning Polaris UTV efforts via driver R.J. Anderson.

“The opportunity to work together with Lucas Oil and Walker Evans Racing on a top- level grassroots racing series like this was one we couldn’t resist, said Polaris Race Team Manager Donna Beadle. “From the onset, our philosophy with the RZR XP 900 was to offer the Side-by-Side enthusiast a way to get racecar-like performance right from the production line. This new Lucas Oil Stock RZR XP class for regional off-road racing brings that philosophy full circle.”

“Using the Polaris RZR XP 900 as the foundation of a fun and cost-effective way to go short-course racing makes a ton of sense,” shared Walker Evans Racing Owner and General Manager Randy Anderson. “We have a great deal of experience in testing and tuning the RZR XP 900s and know that they are very capable race vehicles right out of the box. Everyone at Walker Evans Racing is proud to join Polaris and Lucas Oil in this new venture.”

“The concept of the Lucas Oil Regional program is to offer great racing on world-class facilities – all at a more affordable cost,” concluded Lucas Oil Regional Off Road Series Manager Lee Perfect. “There has already been a great deal of interest expressed by potential racers in our new Stock RZR XP class, and with the help of both Polaris and Walker Evans Racing this class should really take off. Next season is shaping up to be a very interesting and exciting year.”