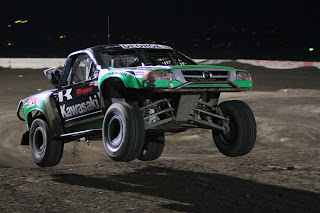 After 8 rounds of hard fought battles, Chad was happy to be back at his home track, just a stones throw from his stomping grounds of Rialto, California. With a complete entourage of family and friends filling his race space, the pressure to succeed mounted on Saturday evening as he staged his Kawasaki/Yokohama Tires/Bull BBQ SuperLite Truck before thousands of horsepower hungry race fans.
As the green flag dropped, Chad put his Yokohama Geolander AT-S tires and King Shocks to the extreme test flying over 100ft. table tops, attacking each corner while moving up two positions. When pressuring for the final podium spot, Chad became tangled with another racer forcing him back to sixth position! With the taste of the podium still in his mouth, Chad used his Lazer Star LX LED lighting for some extra clarity under the dark sky and pushed his Kawasaki SuperLite to the edge of control. By the final lap, he proved he was capable of a come-back by claiming 3rd place and boosting his series points total closer to a championship title. 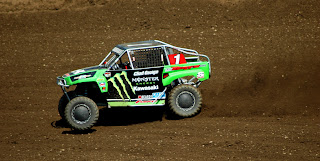 After the race Chad jokingly exclaimed, “Do we get passing points? If we get passing points, those guys don’t have a shot! I go to the back, to the front, to the back… For a bad luck race, I couldn’t be happier!”
As the race weekend rolled forward, Chad started Sunday’s Round 10 event in his #1 Monster Energy Kawasaki Teryx built by Funco Motorsports. The 4-wheel drive Kawasaki Teryx UTV, boasting a C&G Performance tuned power plant, needed a good race to remind the crowd that the #1 defending champ is in town. Saturday’s Round 9 UTV race was a roller coaster ride resulting in a 4th place, so Chad was pumped for Sunday’s fresh start. With the Simpson Racing belts tight, Chad pounded the track lap after lap looking for that 1st place UTV Modified trophy. After 14 laps of searching Chad settled for a much needed and refreshing 2nd place podium finish!
After a quick break, Chad shifted gears into his #42 Kawasaki/Yokohama/Bull BBQ SuperLite. The SuperLite Championship class of 17 hungry drivers filed onto the track with Chad starting on the outside front row. After a quick flip of the green flag, Chad charged into the lead, powered left into the first turn and pulled away. 15 solid laps of looking back in his mirror, no one had the speed, consistency and determination needed to pass the ultra fast Kawasaki SuperLite. Chad George claimed his first SuperLite Championship victory of 2011 and boosted his points standing to 2nd, striking distance to the title.

Chad commented, “We’ve had all the speed and performance this year and this weekend it all came together to give us the WIN, plus two other podium finishes! Thanks to Monster Energy Kawasaki, Kawasaki Motor Corp., Yokohama Tires, Bull BBQ , King Shocks, C&G Performance, Beard Seats and the whole Funco Team! I can’t wait to to see how the next round goes off!”

Join Chad at Rounds 11 & 12 of the Lucas Oil Off-Road Racing Series at Speedworld Off-Road Park in Surprise, Arizona on September 24-25. You can also join Chad on Facebook and Twitter (@chadgeorgesxs)

About Funco Motorsports: Founded by Gil George over 30 years ago, FUNCO Motorsports is the leading manufacture of high performance sand, off-road cars and custom UTV’s . Their unique designs and family oriented service has sold over 400 Big 5 Model cars and their entry into the UTV market has been explosive too. With 4 consecutive championships, FUNCO Motorsports has proven that their experience on the track translates into quality, race-proven products for all UTV enthusiasts http://www.funcoutv.com/

About Kawasaki Motors Corp., U.S.A.: ATVs, Motorcycles, Utility Vehicles, Watercraft and Power Products are just some of the unique consumer products that have made the Kawasaki brand a household name around the world. From the class leading Ninja® sportbikes and thundering Vulcan™ cruisers to the rugged Brute Force™ ATVs, MULE™ utility vehicles and JET SKI® watercraft, Kawasaki products lead the powersports industry around the globe. The secret of Kawasaki’s success is in designing and manufacturing products that offer balanced performance, high quality, reliability and excellent fit and finish. So take a look at what Kawasaki has to offer you in the way of Leading Edge products! http://www.kawasaki.com/ 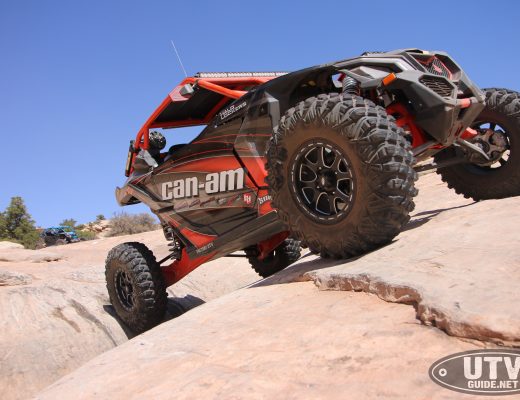