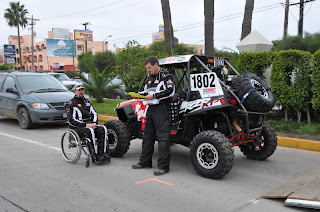 NOVEMBER 29, 2011 – Kane Fraser, a paraplegic, decided to take on the 2011 Tecate SCORE Baja 1000 in a Polaris RZR XP 900 after watching Dust to Glory multiple times and being inspired by the Man in Motion, Rick Hansen. “This was our first Baja 1000, our first time racing, and for me my first time racing in any sport ever,” said Kane Fraser. The team would add over 100 miles to their total mileage after a wrong turn, and in turn would add hundreds of followers as they headed towards their ceremonial finish at 2am Sunday morning, 36 hours after the start Friday afternoon. “We wanted to finish, we didn’t care, nothing would stop us. We kept going and did finish! We were a little bug eyed, but we finished,” said Heino Seibert from Spectra Power Sports, Kane Frasers Co-Driver. Kane Fraser went into this adventure with three goals, “In terms of what I wanted to accomplish, for me number one was to raise $25,000 for the Rick Hansen Foundation. Second, is to create awareness of the abilities of people with disabilities. And third, to inspire one disabled person to really move ahead with their goals and strive to achieve their goals, because as long as you try and try you will succeed, you just have to keep moving forward.” 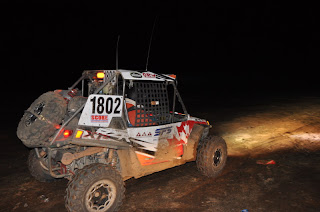 Over the Holidays of 2010 Fraser was watching Dust to Glory when he told his wife Cara that this is what he wanted to do next. She was less than enthused, but he was reminded what his friend Dennis Beebe had often said, “It is not about the disability, it is about the possibilities.” He enlisted the help of his friends, and with never even being in the desert, much less racing, they set off on this awesome journey. “We were super naive, but we learned a lot along the way, and got laughed at a lot which was fun,” Kane said with a smile. “In the eleven months prior to the race, a lot of people helped 1802 work towards the goal, even up to the day before in Ensenada when we were working on the RZR. Without all the help from these people the team would have been less prepared and may not have completed the race. I would just like to thank everyone on the team for the contributions, it took all of us to make this happen!” 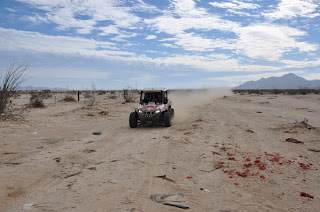 When they originally started on this project and had to decide on the vehicle, the group at Spectra Power Sports said, “get the new RZR 900 XP, its crazy.” He watched the video and agreed it was perfect for the challenges they had seen in Dust to Glory. “I never even considered another machine, I like the Polaris products, but really like the guys that sell it locally. I asked Heino and Gilbert if the machine could do it stock, they said ‘no problem’. I want to use a machine as stock as possible, with four modifications, a larger fuel cell, pre-air filter, light bar, and foam filled radial tires, but that didn’t happen as they rebuilt the machine from the ground up, a story all to itself,” remembers Fraser. “One thing I decided early on, finishing the race means winning the race to me. I do not need to beat anyone, I can cross dead last as long as I at least cross in the allotted time and in one piece, at least, with no broken skin, bones are optional. You finish the race, you win the race. We won!” said Fraser.

The number one goal was to raise money for the Man in Motion, Rick Hansen Foundation. “I decided that in honor of his 25th anniversary and the fact that we are from the same hometown that we should support him. Our target fundraising effort for the Rick Hansen Foundation is $25,000, a thousand dollars for each year. This is a far cry from what he is doing and has done, but we want to do it.” More information and donations can be sent at www.Baja1000Fundraiser.com.

The team held multiple fundraiser events local to them in Canada, but the off-road community as a whole was unaware of this team and its goals until almost the end of race day. In the age of Internet race tracking, the team had been seen making the wrong turn, and been heard calling into Weatherman for help rerouting back to the main course. After an almost 100 mile detour, and lots of help from locals, they made it back to the racecourse. “There are obstacles in everyone’s life,” said Fraser. “Like we were just talking, how could you miss the turn, there were like 15 flags! We kinda knew there was something wrong when we were mixing it up with the Trophy Trucks and Class 1 cars. Then the challenge was how do we get back in the race. We couldn’t let our team down, we had been prepping for 11 months and just to let a little 100 miles get in the way of the finish wasn’t an option.”

As night fell for the second time for racers of the 2011 Baja 1000, ‘1802’ was still on course. They still had many miles to go, and would not make it to the finish line before it closed. As the Internet followers found out more about the 1802’s pilot and his story, the encouragement to finish got louder and louder. Bob ‘Weatherman’ Steinberger took up the cause with SCORE Ops “Once you close the course, you can’t stop them from continuing, so let it ride, there are people on the internet that would hate you for not letting them finish,” said Weatherman who followed it with, “as a Ceremonial closure, 1802 should be allowed to finish the race. He is a paraplegic here to do his bucket list and he is amazing, absolutely amazing, you don’t want to stop this guy.” SCORE Ops understood the message, “Ok, Thank you.” 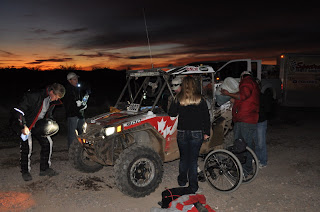 As part of the final efforts to get to the finish line, the #7 Jim Riley Azunia Tequila General Tire Trophy Truck who had fought its own demons for the last 32 hours was also still on course and wanting to say they finished. Neither team knew the impact they were making on each other, all they knew is they individually wanted to get to the finish line, even though it was officially closed. What the Internet world knew is that the #7 Trophy Truck was behind the #1802 UTV and would be their support if anything were to happen in the final late night stretch. The final hours from 10pm to 2am Sunday morning when they finished were some of the most watched Internet hours as they were cheered on along the way. The ceremonial finish line was set up at the edge of town where pit crews, family and friends were there to applaud the two sets of lights coming down the street. Jim Riley said, “At the end of the day we met up with 1802 at the beginning of the wash in Ensenada and drove to the newly established finish line by friends and family. There was no Tecate or finishing pin but the smiles on our friends faces will never be replaced by a formal finish line. We shook hands with the support team from 1802 and took some pictures together – all knowing that we just beat Baja on our own terms and timelines…I would not trade my race for all the wins in the world!” The level of support for these two teams would make any pro racer envious.

Kane Fraser and his teammates never gave up. They persevered over 800 miles in 36 hours to say they “finished” the Baja 1000. At a celebration in Southern California the Monday after the race, the team was greeted by many Internet followers and was able to tell more of their stories. The 1802 team has become a welcomed group of the off-road community. Please help spread their story and support their message: 1. Raise $25,000 for the Rick Hansen Foundation www.baja1000fundraiser.com. 2. To create awareness of the abilities of people with disabilities. 3. To inspire one disabled person to really move ahead with their goals and strive to achieve their goals. “Because as long as you try and try you will succeed, you just have to keep moving forward,” said Kane Fraser.

More about Kane Fraser: Kane Fraser became a paraplegic after a spinal cord accident that rendered him to a wheelchair. He has a very supportive extended family including wife Cara and four children. As a Millright, he had to find a new profession and went back to school to be a chartered accountant. He resides in Canada and believes that he can do anything that he thinks he will enjoy or will find challenging. Kane see’s Rick Hansen as a great inspiration to never give up on his goals to achieve more. 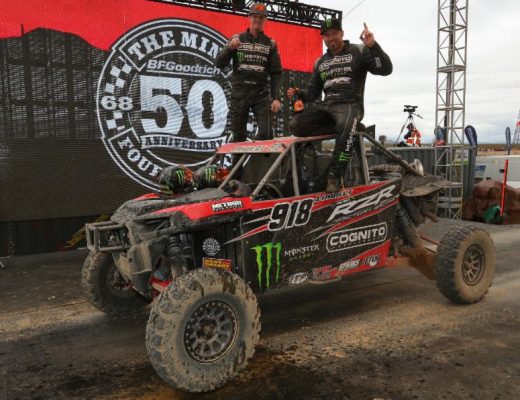 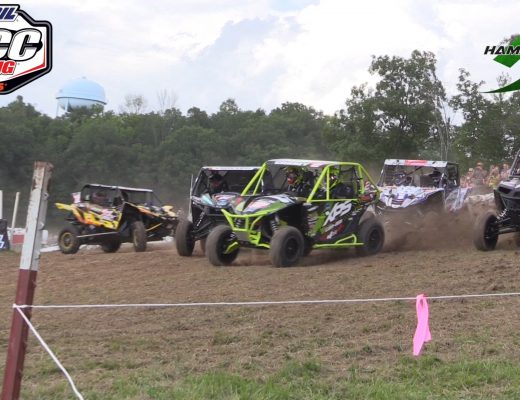