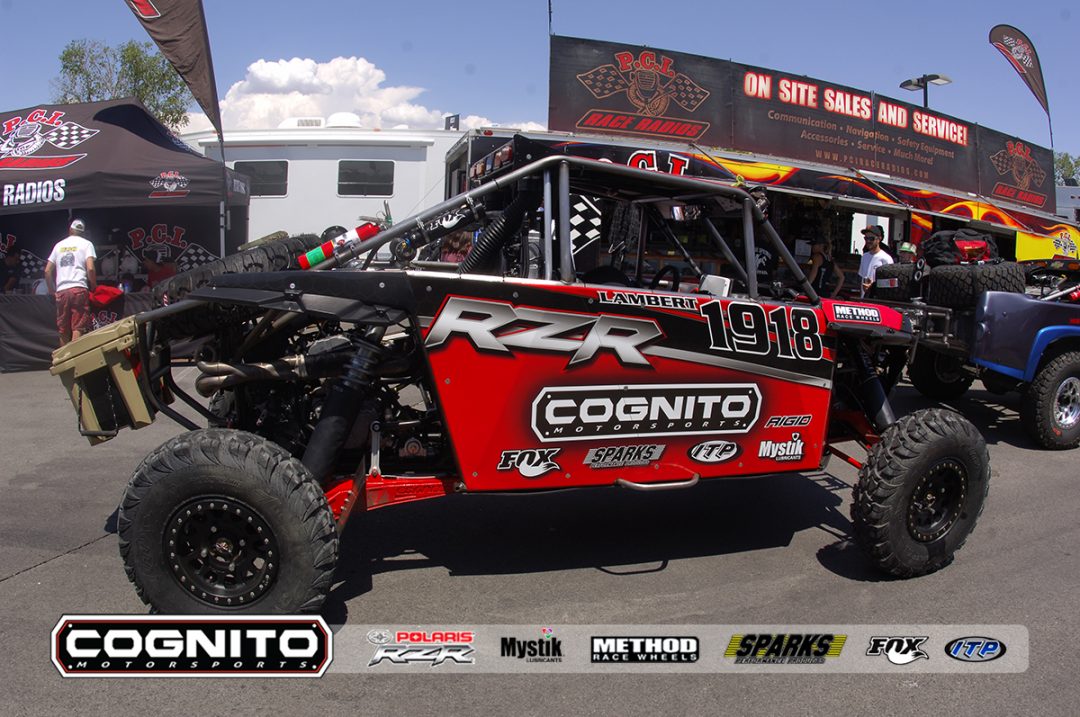 Vegas to Reno is the longest off-road race in the United States, and this year it was a 2-day event racing 220 miles Friday and 350 miles Saturday for a total of 570 miles. We have been on a roll this season and I don’t think I have ever put this much pressure on myself before a race, my heart was pounding before the race and I can’t wait to just get the race started which calms me down as the focus is on the next turn on the dusty course we are racing on. After the race starts, I am doing it rather than thinking about it. The first 20 miles of the race was full of broken and stuck trucks and cars, and dust sitting in the air blocking vision. The silt beds were obnoxious and 2wd vehicles had a tough time in them, a lot were stuck and piled into each other’s bumpers. Mitchell and I were patient and smart and let the 4wd RZR do its work. The next 200 miles were also a test of patience as the terrain was a lot of soft and silty straight roads that required watching engine temps and just making sure to finish out the day strong. Of all trucks, cars, and UTVs, we had started 148th of about 180 entered, and at the end of day 1 we had finished 59th putting us faster than a lot of trucks and cars that are in faster classes. Of all UTVs, we had started in 5th position overall and 1st position in class and ended day 1 in 2nd position overall and 1st in class. Our goal is to win our non-turbo class, but of course, an overall UTV victory would be stellar, beating everyone including turbo UTVs would be very impressive. Carver was out front on day 1 in his RZR XPTURBO, so starting day 2 we were in good shape and right where we needed to be.

At the start of day 2, staging order would be that of the way day 1 was finished, so we started in 59th position for the day, and 2nd overall UTV behind Carver but with about 5 trucks separating us, and with plenty of fast trucks and cars behind us that had issues on day one. Mitchell did a great job keeping an eye on the rear view mirror and as those big trucks were coming, we knew before they were very close. We looked for good places to pull over before they reached us and let them by safely. If you don’t know, desert racing is scored on corrected time, so even though we are at the front of our class physically, we don’t know if someone who started later is catching us and they could actually beat us on corrected time even though they are behind us. Day 2 was a much more enjoyable course, it paid off to get thru day 1 and be able to have some fun on day 2, there was much less silt which brought speeds up and we were really able to shine with our equipment and skills. About 150 miles in and with clean air, we started to get into some dust so we knew we were catching someone. About 5 miles later we could see a flashing blue light thru the dust which is a tell-tale sign of another UTV and we knew it had to be Carver. It was tough to get close, the dust was crazy since the ground was so dry and there had already been over 50 heavy and powerful trucks and cars run over it that loosen up the ground. We ended up in a wash section that had some sand in it and that was our opportunity to pull up on Carver who looked to have a low rear tire, we made the pass and tore off knowing it was all up to us know to keep it together for another 200 miles. The rest of our team chasing the race was giving us updates on the next UTV behind us, we had a few minute cushion but it was too close for comfort so we poured it on to try and get away and widen the gap. We came across some more dust and figured it had to be a truck that might be having an issue and not at full power, but it was tough to get close due to visibility. We were held back for a good ten miles knowing that the UTVs behind us were able to gain on us if they had clean air. Then we saw the truck pull over about a quarter mile ahead of us just before a big hill, they turned around like they had blown a turn, when we got to the turn we noticed it was actually a Y with 2 arrows that were telling you to go either around it or over it. They went around it and we went over it which was super sketchy going down the other side, we were able to get around the truck with this move and had clean air again. Through the next pit our support team told us we still only had 3 and a half minutes on Matt Burroughs, I was in awe that he was keeping up with our pace but was also proud because he was running on Cognito suspension. We were now in a section that was like rally racing with graded roads and a lot of curves, but there can always be a rock in the road around the next turn so its tuff to go all out. We were doing about 65 thru this section and drifting the corners, it was a really good time and then we come around the next right-hander and there is a bowling ball sized rock in the middle of the road that was obviously kicked out there by a truck. Our smaller UTVs can’t handle going over a rock that large at those speeds, and we missed it with the front tires but blasted into it with the driver rear. Immediately were heard some crazy noises and I thought we had just blown it. The brake pedal went to the floor and it sounded like we were dragging something. We pulled over and Mitchell got out and said it was just a tire and wheel, he got it changed in a hurry and we were back to racing again and all seemed well even with the brakes. We were relieved except that darn truck had gotten by us, we soon caught up to his dust again but couldn’t get close enough for a pass, the dust was still blinding and we knew the next UTV had to be getting close after we spent time changing the wheel and now held up again in the dust. After about ten minutes of eating dust for lunch, the truck had slowed down as there were 2 cars broken down one on each side of the narrow road, and the gap between the 2 was barely wide enough for a truck to squeeze thru. This allowed us to get on the trucks bumper and go faster thru the gap since we are much narrower, luckily the truck saw us and let us pass before they stirred up dust again. We thought that was a gift and worked out perfectly for us. The next 60 miles we ran a fast pace all the way to the finish, not knowing how far back the next UTV was. We crossed the finish line 1st overall UTV but we knew that someone could actually beat us on corrected time. The rest of the Cognito crew met us there at the finish as well as Joey from UTVunderground and assured us that the rest of the field was not close enough to beat us. We had just won Vegas To Reno and it felt super special as that is back to back V2R overall wins and also makes 5 in a row wins for us this season with 3 of those 5 wins being overall. Joey had a special surprise for us from Polaris as they had decided to put up a bonus for podium finishes in Polaris vehicles, and if all 3 podium spots were filled with Polaris, they would double the bonus! We walked away with a $10k bonus from Polaris which is much appreciated! This sport does not make a living for Cognito so with some extra money to help with expenses, it makes a win even more enjoyable and special! Special thanks from the Cognito team to UTVunderground for the race coverage and to Polaris for helping fund that coverage. Without this coverage, our sponsors would be invisible.
We have a great team and the results are showing, I get the most recognition but the rest of team has just as much to do with our results as I do.

Huge thank you to our sponsors:

Spirit of the Gazelle—Sarah Price and Erica Sacks