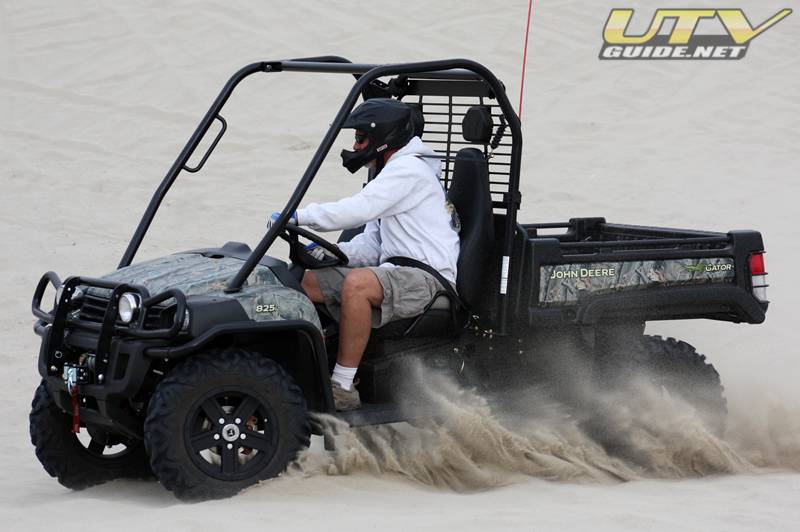 John Deere introduced their 2011 lineup last June, and I was lucky enough to travel to Carolina Adventure World to try the new Gators out. Top of the list of enhancements to the Gator lineup was the all new XUV 825i. XUV is short for Crossover Utility Vehicle and it is John Deere’s intent to move the Gator from pure work/utility to more or a utility/sport UTV. At the media event, we had a few presentations and then we got to play around on the trails for a few hours. I was pretty impressed with the bump in power and improvements made to the suspension, but it was really hard to tell exactly what a vehicle can do in such a short time frame. Fast forward a few months, and I was down at my local dealer picking up a brand new 2011 John Deere Gator XUV 825i 4×4. This was on a Monday, and I just happened to be heading to Sand Mountain in Nevada that weekend. Hmmm.

Now let’s take a minute and look at the Gator XUV 825i. It has a dry weight of over 1,600 lbs. It has a huge bed (16.4 cubic feet) that has a spray in bedliner and can haul 1,000 lbs. When you drive it, you can tell it is built for work. Kind of like my Dad’s old 1975 Ford F350 back when I was in high school. Throw a cabover camper in the back and go, no worries. So now couple that pure work/utility focus with a 3 cylinder, 50 horsepower engine and a completely re-designed front and rear independent suspension system that delivers a superior ride through rough terrain, and you have the potential for a vehicle that can work and be used for recreation. So with all that in mind, I decided to bring it along to the dunes and maybe go for a desert trail ride or at least use it to run around from camp to camp. Saturday morning came and I twisted my friend’s arm to follow me in another UTV with an in-car video camera while I drove the Gator XUV 825i. Now I have been going to Sand Mountain for years, and have brought several different UTVs to the mountain. Only a few can make it to the top in stock form, and I knew right off that the Gator would not be one of them. But I was really curious to see how it would do with trails through the dunes, side hills and some climbing. We took off from camp, and it felt pretty good. I could feel the 1,600 lbs under me and the steering felt a lot like I was driving a bus, but the power was decent and it felt stable and predictable. We rounded the corner to the back side and I saw the trail up to Super Bowl in the distance. I figured we would do some small hills and trails and work our way over that way. The trail up to Super Bowl is pretty steep. Not as steep as the face, but there are still plenty of UTVs that either can’t make it or struggle pretty hard doing so. I hadn’t aired down the tires for more flotation, but what the heck, let’s give it a try.

Surprisingly enough, it went right up! Now as we sat there looking at Super Bowl, it almost called me in to try it out. Super Bowl is a full bowl and the only way out is at one of the sides. If you don’t have enough speed, you will end up at the bottom. This didn’t really cross my mind until I entered. “What was I thinking?”, was my first thought. As I tried to climb and side hill, gravity kicked in. This could be fun….My foot was to the floor and I tried to stay up as high as I could and I swung around to the other side. I dove down a bit to gain some speed then ramped up the edge with a side hill slide at the end before hoping out. Alright! From Super Bowl, I headed back down and was convinced I had a good shot at making it all the way around the mountain. The toughest spot lay ahead by “The Wall”. Climbing out of the valley is a spot we’ve always called Toyota Gulch. Supposedly, Toyota’s could make it in, but not out. We blasted through the whoops in the valley then started to lose speed as we neared the top. The tires kept clawing at the sand, and I was still making forward progress. I did not set any land speed records, but I did make it out. From there, it was a hop, skip and a jump and we were back at camp. Hanging out at Super Bowl

I have to say I was completely impressed with what I was able to do with the new Gator XUV 825i. Don’t get me wrong, if I was looking for a dune UTV, a Polaris RZR S or Can-Am Commander would be higher up on my list. But that isn’t what the Gator is built for. It is built to do work, lot’s of it. Heck, the bed capacity on the Gator alone is more than a RZR S and Commander, combined!

But if I was looking for a vehicle that can haul rock, dirt, hay, tools and equipment all week long, then head for the trails on the weekend, the new Gator XUV 825i is very capable.

The Gator has a long heritage in the utility market as a workhorse. With the new 2011 XUV features, you can go have fun after after your work is done. John Deere is a world leader in providing advanced products and services for agriculture, forestry, construction, lawn and turf care, landscaping and irrigation. John Deere also provides financial services worldwide and manufactures and markets engines used in heavy equipment. Since it was founded in 1837, the company has extended its heritage of integrity, quality, commitment and innovation around the globe.