Ontario, California, March 15, 2016 – ITP racer Branden Sims won the Mint 400 UTV overall and the UTV Turbo class, while ITP-backed drivers Justin Lambert and Dave Martinez also notched victories in their respective classes at the Mint 400 in Nevada. The racers all competed on ITP UltraCross R Spec tires to earn the coveted 2016 Mint 400 victories and post an impressive three class-sweep at round three of the Best In The Desert racing series.

“Our racers continue to hammer home the point that the best tire for desert racing success is the ITP UltraCross R Spec tire because of its ability to withstand the harsh, demanding terrain,” said Rhett Turpin, ITP Director of Sales. “ITP is thrilled to help all riders reach the winner’s circle, but we are especially happy for Branden Sims, Justin Lambert and Dave Martinez for earning victories at the prestigious Mint 400 with our tires.”

The Mint 400, also known as “The Great American Off-Road Race,” served as round three of the 2016 Best In The Desert (BITD) racing series. On the schedule, the Mint 400 is viewed as one of the premier events (along with the Vegas-To-Reno race) where success here often shifts the spotlight more squarely on the victors moving forward. However, just finishing is also seen as a reward in and of itself. That’s no easy task, considering the Mint 400 features a gnarly course that requires racers to make three laps, covering 330 miles and is open to many vehicles – from high-speed / loud Trick Trucks to a growing number of side-by-sides. This year, event organizers decided to add in another challenge, and that was to have the racers run the course in reverse direction.

Branden Sims (No. 1913 Lonestar Racing / Polaris) took home top honors in 2016, winning both the UTV overall and the UTV Pro Turbo class in his RZR XP1K dressed in ITP UltraCross tires. Sims posted the fastest lap of the day in the side-by-side division, posting an impressive 2:09:02.913 time on lap one, which helped propel him to the front.

“Today will be remembered as one of the best days of my life,” explained Sims on his Facebook page. “After roughly 350 miles, we crossed the finish line in first place overall at the coveted Mint 400. My ITP UltraCross tires had zero failures.”

Justin Lambert, coming off his impressive UTV World Championship victory, ran a great race and posted the fastest lap (02:12:03.081) of the day in the UTV Pro Production ranks and was pushing Sims right up until the end when a transmission mechanical forced him to improvise. His car lost a belt within a 1/4 mile of the finish and he did what any determined racer would do: push! With help from Sims, Lambert shoved his car across the line for the Mint 400 victory. It was his third straight UTV Pro Production class win in BITD competition. Lambert and his No. 1918 Cognito Motorsports / Polaris RZR XP1K “Hellraiser” car, outfitted with 8-ply, 30-inch ITP UltraCross R Spec tires, have definitely become the face of BITD as of late with his recent success.

Ryan Laidlaw (RedLands / Polaris), who won round two, led the UTV Pro Turbo class and diced with Sims for the overall on a portion of the race, but ended up settling for third place on the day. However, in two UTV Pro Turbo class events this year, Laidlaw has made the podium both times using ITP UltraCross tires on his Polaris Turbo.

Fourth place in the highly competitive UTV Pro Turbo ranks went to brothers Derek and Jason Murray. The Can-Am / ITP / Murray Racing squad said they planned to run conservative race but aim for the podium. While they missed the box, their fourth-place finish was good enough to push them into second place in the UTV Pro Turbo class point standings heading into round four. Their finish also marked the 41st consecutive time they’ve completed a BITD event.

Finishing one spot behind the Murrays was Can-Am teammate Logan Gastel, who also ran ITP UltraCross tires on his turbo vehicle. Gastel was coming off of a DNF – his first in more than five years of competition – at the UTV World Championship event and wanted to make amends at the Mint 400. His fifth-place UTV Pro Turbo Class finish did just that and salvaged some valuable points in the process.

Another big class victory went to racer Dave Martinez, who piloted the No. 2905 Can-Am Maverick outfitted with ITP tires. Martinez, who competed in a different series last year, has been competing in the UTV Pro Unlimited class in 2016. The win was Martinez’s first this season. Martinez posted his fastest lap time of 02:23:52.584 on the first lap and then drove a steady race all the way to the finish.

About The Carlstar Group
The Carlstar Group is headquartered in Franklin, Tennessee and is a global manufacturer of original equipment and aftermarket specialty tires and wheels for the agriculture, construction, outdoor power equipment, powersports, high speed trailer and flat free/manual markets. The diverse portfolio of solutions are offered under several leading brands including Carlisle® tires and wheels, ITP® tires and wheels, as well as Cragar®, Black Rock® and Unique® wheels and Marastar® flat free and manual tires. The Carlstar Group employs 4000 associates in 22 facilities located in five countries. Since 1917, a culture of converting great ideas into advanced products has created a legacy of excellence in product innovation, quality, and customer service. For more about The Carlstar Group, visit www.carlstargroup.com 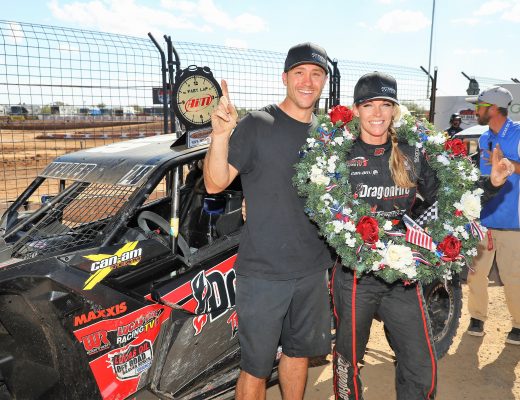