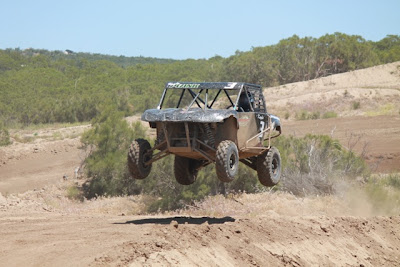 Anaheim, Calif. – June 20, 2012 – Round 6 of the 2012 WORCS ATV series took competitors to On the Edge Raceway in Central, Utah this weekend. The rough course paired with heat and dust made for a difficult race, with several racers experiencing substantial mechanical problems.

Despite the challenging terrain and conditions, GBC’s Kayla Smith piloted her Rhino to a 2nd place finish in the SXS 700 Production class. Coming off of a class win in the previous round, this finish marked her 4th podium appearance of the series while also earning an 6th place overall SXS finish.

Smith has been enjoying a successful racing season in 2012 in a variety of race series, thanks in part to her GBC Dirt Commanders. According to her team the 8-ply SXS tires “held up perfectly to the brutal conditions of this track,” which included rocky terrain, water crossings and silt beds.

Look for Smith and other GBC racers this weekend at Round 3 of the Dirt Series at Pala Raceway, Round 5 of the Yamaha Quad-X Series at Speedworld MX, and Round 8 of GNCC Racing at the Motosport.com Snowshoe. Visit us online at www.gbcmotorsports.com for more information, and follow us on Facebook and Twitter for the latest updates on ATV/UTV products, events and races.