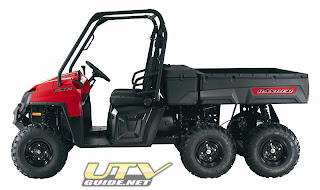 Freeland Volunteer Fire Co., now owns a piece of equipment that’s one- of-a-kind in the Hazleton area.
A grant to obtain the new emergency tool is also a rarity – Freeland was one of 20 companies in the nation to receive the funding.
It’s a 2010 Polaris Ranger 6X6 utility off-road vehicle, obtained through Operation Ranger, a grant made possible by Altria smokeless tobacco and Gifts of Kind International, Wilson Malloy, assistant fire chief, said.
The piece is being called utility No. 56 by the company, which also happens to be Freeland’s station number.
Malloy located a grant for the $15,000 piece of equipment and applied for it online by writing a 500-word essay on why the Polaris is needed in Freeland.
Malloy said with the increase in all terrain vehicle accidents and searches for lost riders in the area, coupled with the rural spaces that surround Freeland, the need for the equipment was easy to explain.
Malloy said ATV riders, predominantly people from out of town that are unfamiliar with the area, are getting stranded in the woods and nearby coal stripping pits more often in recent years.
“They’re getting stranded in areas where you just can’t get a vehicle,” he said.
Fire Chief Joseph Stepansky said the department had three rescue calls for ATV riders in the past three months.
Malloy said the Polaris will also help out communities as part of the Luzerne County mutual aid assistance.
Wednesday, the company officially welcomed the piece to its station, parking the vehicle outside the station. Malloy walked over to it and turned the utility vehicle’s ignition on as its engine gurgled just like an ATV would.
Though the Polaris may appear to look like a large ATV, the automatic transmission vehicle with tilt steering and electric starter has more features.
The Polaris has a box on the back that can either act as a dump or a safe place to transport a rescued patient from the woods.
Stepansky said most ATV’s can only carry one person – the driver – and most don’t have seatbelts. The Polaris, Stepansky said, can carry two people in it with seatbelts.
It has additional storage capacity and comes with a winch that’s able to pull up to 4,000-pounds. The vehicle can also switch from six-wheel to two-wheel drive and will be an asset during major snow emergencies as it’s easy to negotiate on snow-covered roads.
“It’s a good addition to our fleet,” Malloy said.
And according to some of his fellow volunteers, Malloy is an asset to the department.
Calvin Herring, of the department said, in the past 10 years Malloy was able to obtain $435,000 in grants for the company.