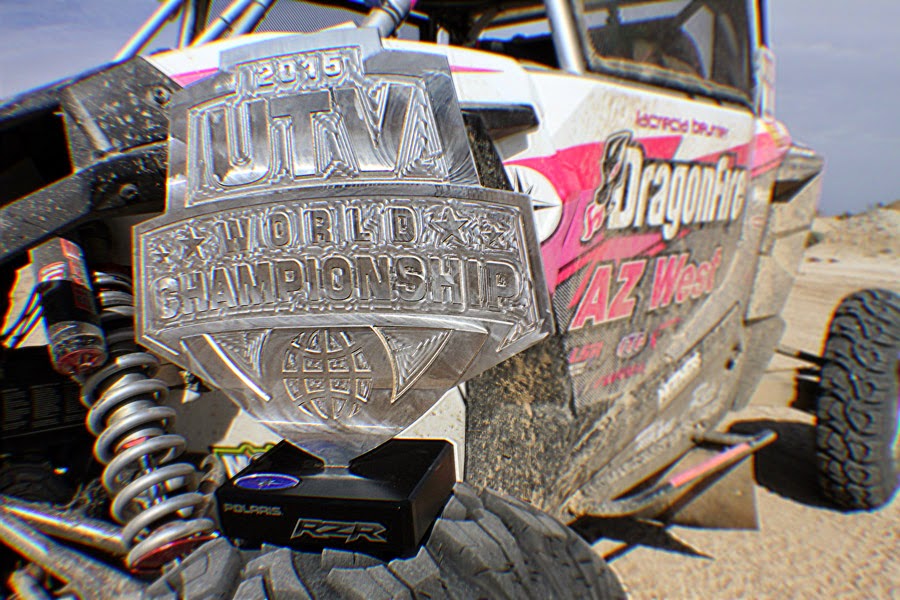 Lacrecia Podiums Laughlin, Looking For A Win At The Mint 400

Chandler, AZ February 23, 2014 – Nearly 125 of the top UTV racers in the country turned out for the first ever Best In The Desert UTV World Championship in Laughlin, Nevada, this weekend. DragonFire-sponsored racer Lacrecia Beurrier stepped up to the Unlimited UTV Pro class for the World Championship… and took a step onto the podium as well! With $100,000 in prizes and two Polaris RZR XP 1000s on the line, the inaugural event featured a world-class field of UTV racers as well as the who’s who of the UTV off-road Industry.

“We were thrilled to have 122 UTVs signed up to participate in the Walker Evans Racing Desert Championship and Holz Racing Products Production Championship,” said UTVUnderground.com CEO and event promoter “Joey D.” DiGiovanni. “The colorful parade of race cars through vendor row and tech lasted for hours because of the killer driver turnout. Many of UTV racing’s top drivers were also on hand this afternoon to sign autographs and hand out posters.”

Lacrecia joined the top Pros at the Polaris Pavilion to sign autographs during tech and contingency before the race, then she joined a couple more newly crowned Polaris World Championship winners at the finish.

A return to Polaris in the off-season and upgrading to the Unlimited Pro class left Lacrecia with a couple points to prove in Laughlin! While fellow Polaris pilot Branden Sims won the overall (and a new XP1K RZR) and the team of Steve Scott/Bryson Carrier won the Unlimited Pro Class at the UTV World Championship, the podium placement for the DragonFire/AZ West/Rockstar Racing effort was just what the doctor ordered for full-time ER nurse/part-time pro UTV racer Lacrecia. “We needed a shot in the arm leading up to The Mint 400,” she quips.

A two-time winner of the infamous Mint 400, Lacrecia used Laughlin to learn what needs to be done to the new car before tackling the world’s toughest off-road race coming up in March. “The UTV Championship course was tough, probably tougher than people expected… but it was the perfect test for moving up to the Unlimited UTV Pro class. I want to win The Mint 400, again,” she declares.

The Mint 400 kickoff party in Las Vegas is set for Wednesday, March 11th. All the racers will parade from South Point Casino to the party at 10th and Fremont. In addition to seeing Lacrecia’s hot pink Polaris RZR in the procession, fans can get her autograph and some DragonFire swag at the Rugged Radios Meet & Greet on March 12th or at tech and contingency on Friday the 13th. See themint400.com for a full schedule of events.

This two-time Mint 400 winner races for a reason — she is out to honor the survival, determination and compassion of those fighting breast cancer. The pink ribbon for breast cancer awareness is not something Lacrecia just slapped on the car last October during Breast Cancer Awareness Month. “Racing For The Cure is where it all started for me,” she says. “My first race in my old Rhino was a charity event to raise money for the program.” Lacrecia quickly went from charity events and powderpuff racing to the real deal, competing in what is billed as America’s toughest off-road race, the Mint 400! Not only did she finish the race, she won the Sportsman UTV class first time out and then came back to successfully defend her title… proudly running pink trim for both her Mint 400 wins. She is a true champion, on and off track — when she is not ripping it up on the race course, Lacrecia’s “real” job is as a registered nurse in Lake Havasu, Arizona. DragonFire and AZ West are honored to have teamed up with Lacrecia’s Rockstar Custom Motorsports effort this season. See http://rockstarcustomz.com for details on Lacrecia Beurrier’s program.