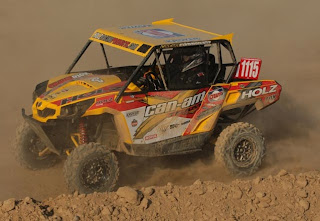 “Our Can-Am racers had successful weekends in both Nevada and Texas. Josh Frederick has gotten off to a great start this year on his DS 450, moving into a tie for the ATV Pro class points lead. He put in a great effort on the ATV and in the Commander 1000 X side-by-side vehicle in WORCS,” said Jimmie O’Dell, Race Manager, Can-Am. “Hunter Miller had a great debut in the Commander 1000 X in its TORN series debut, and also started the 2012 season off on the right foot with a Pro class victory aboard the DS 450.”

WORCS
Motoworks / Can-Am DS 450 pilot Dillon Zimmerman grabbed the WORCS ATV Pro-class holeshot after the dead-engine start, and led for two laps to start the Nevada round. However, a mechanical issue forced Zimmerman into the pits for a brief repair. He re-entered the mix, but ended the day in eighth place.

Frederick had his own challenge, as he was just outside the top five at the start of the race. After steadily moving to the front, Frederick found his way around the leader near the one-hour mark. From there, the former WORCS ATV Champion and Nevada native dominated on his home turf. He crossed the finish line more than a minute in front of the second-place rider. It was his first win of 2012 and pulled him into a tie for the Pro class points lead heading into round three.

“It was really dusty at first and the track was rough, so I just had to ride cautiously,” said Frederick. “I moved up pretty quickly and when I took the lead, I just kind of cruised. It felt like it’s been a long time since I was on top of the podium, so it felt really good to be up there. The Can-Am DS 450 always shines in the rough stuff.”

In other ATV class action, Can-Am X-Team racer and reigning Pro-Am ATV Champion Collins Webster finished second in the Pro-Am class and also won the Production A class on his DS 450.

In just his second official race behind the wheel of the Motoworks-prepped Can-Am Commander 1000 X, Frederick overcame a tough start to finish fourth in the SxS Production 1000 class against 37 other racers. After getting hit from behind by another racer at the start, Frederick showed the poise of a champion and calmly clawed his way back into podium contention during the 45-minute race. He came up just a few seconds shy of making in on the box, but was happy with his fourth-place finish.

Round three of WORCS is scheduled for March 16-18, in Lake Havasu City, Ariz.

TORN
Hunter Miller, the defending Pro 450 class champion, jumped out to an early lead aboard his Louis Powersports-backed Can-Am DS 450. He battled for the lead with his brother and fellow Can-Am X-Team member Cody Miller and another racer until the midway point. Hunter held off both riders and finished roughly 14 seconds ahead of Cody for the win.

Hunter also notched a victory in the UTV Unlimited class in a nearly stock (aside from the exhaust, wheels and tires) Can-Am Commander 1000 X. Throughout the race Miller held off challenges from two highly modified, turbo-charged side-by-sides. Cody Miller also made his TORN debut behind the wheel of a Can-Am Commander 1000 X. He finished second overall in the UTV Limited class, just two seconds behind the winner.

Round three of the TORN series is slated for March 24-25, in Callisburg, Texas.

Bombardier Recreational Products Inc. (BRP), a privately-held company, is a world leader in the design, development, manufacturing, distribution and marketing of motorised recreational vehicles. Its portfolio of brands and products includes: Ski-Doo and Lynx snowmobiles, Sea‑Doo watercraft and sport boats, Evinrude and Johnson outboard engines, Can-Am all‑terrain and side-by-side vehicles and roadsters, as well as Rotax engines. BRP products are distributed in more than 100 countries.