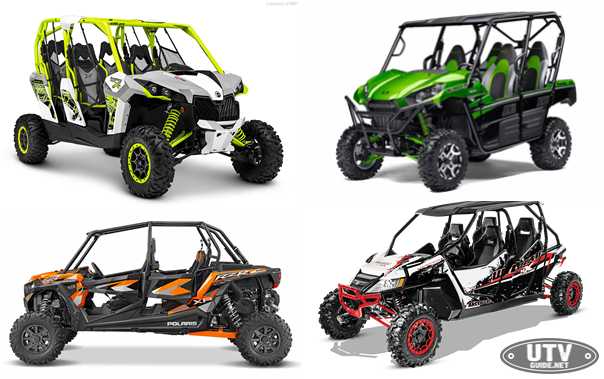 Here in America, we like options. Whether it’s where we are headed for dinner or the type of car we want to drive.  Fortunately these days, when it comes to buying a new UTV we’ve got plenty of options to choose from as well.  For the family of enthusiasts who once had to purchase a fleet of ATVs or motorcycles in order to get out and enjoy the outdoors together, today consumers have a plethora of four seat fun movers to choose from. Polaris started the sport four-seat trend back in 2010 with the introduction of the RZR 4 800. Polaris saw a market for a multi-passenger sport vehicle at a significantly lower price than an expensive sand car. The RZR 4 did so well that Polaris set the bar even higher when they introduced the RZR XP 4 900 in 2012. With the instant success of the RZR XP 900 and the popularity of RZR 4, it was a natural progression to develop an extreme-performance four-seat vehicle.

It was only a matter of time for the other manufacturers to jump in on the success of this market segment, and in 2014 Polaris was joined by Can-Am, Arctic Cat and Kawasaki.  Since then, performance has gone up with a few turbo models from Can-Am and Polaris.

For the purpose of this comparison, we’re going to focus solely on sport and sport-rec models.  There are host of multi-passenger utility side by sides available but we wanted to call your attention specifically to the options available to folks who are focused more on recreation than utility. The current horsepower king, the RZR XP 4 Turbo EPS is a class leader in terms of horsepower and is tied as the leader in suspension travel.   The 925cc turbocharged Pro Star engine puts out 144 horsepower and an amazing 105 ft-lbs of torque.  FOX Podium Internal Bypass shocks are standard all the way around providing 18 inches of rear suspension travel and 16 inches up front.  Tall 29 inch Maxxis Bighorn tires are standard on the XP 4 Turbo EPS contributing to the highest ground clearance in its class and triple bore front hydraulic brake calipers provide excellent stopping power.  At $27,499 the RZR XP 4 Turbo EPS is the priciest machine on our list but if you’re looking for lots of fun and plenty of power to go wherever you want, this might just be the machine for you.  Read more: RZR XP 4 Turbo EPS Review and RZR XP 4 Turbo Desert Review.

The RZR XP Turbo is the most expensive of the four-seaters, but has the highest horsepower and is the only one with internal bypass shocks. The other high performance contender on our list, the Can-Am Maverick MAX X ds Turbo has developed a loyal following and offers prime performance in virtually every category.  The 976cc Rotax engine pushes out 131 ponies of hard hitting, usable horsepower.  Patented Intelligent Throttle Control (iTC) keeps the power delivery steady in any situation where your foot might slip or chatter on the gas peddle.  FOX 2.5 QS3 Piggyback shocks with bottom out control are exclusive to Can-Am and provide 15 inches of front suspension travel and 16 inches in the rear.  Many users praise the Maverick for having one of the most comfortable cockpits in the industry and passengers in particular appreciate the elevated rear seats to provide an unobstructed view of the terrain ahead.  A sticker price of $25,199 is not the highest on our list but justifying that price for a toy instead of a brand new car may be a hard sell to the wife.  Hear from one Can-Am enthusiast who settled on the Maverick MAX X ds Turbo for his family after comparing several other models HERE.

The Maverick X ds Turbo is one of only two turbo four-seat UTVs, and is also the second heaviest. The Maverick has a more upright seating position than the Wildcat and RZR.  Some guys over 6 feet tall prefer this. The machine that made quite a ripple in the industry just a few years ago is working its way towards becoming a more economical option for thrill seekers on a budget.  The Polaris RZR XP4 1000 has a 999cc High Output Pro Star Engine that cranks out 110 HP of naturally aspirated performance and is nearly identical to its turbocharged older sibling with the exception of the engine and Walker Evans Racing Needle Shocks.  Additionally, the different engine and shock configurations shave over 100 pounds off the total weight of the vehicle.  $22,299 is still in the new car zone but is more competitive with the other vehicles in our comparison. Read more: Polaris RZR XP 4 1000 Review. When Arctic Cat originally released the Wildcat 1000 it was clear that they were serious about suspension.  To this day, the Wildcat 4 and Wildcat 4X offer the most suspension travel in class with 18 inches in the rear and 17 inches up front thanks to JRi ECX1 shaft adjustable shocks.  While the peak horsepower is nothing to write home about, the Wildcat 4X offers a number of unique features that are sure to appeal to consumers.  Comfort features like dual LED headlights and taillights along with infinitely adjustable tilt steering are just a few nice touches that show Arctic Cat cares about the details.  Duro Power Grip 27 tires come standard and a long 124 inch wheelbase will have you making quick work of whoop sections.  MSRP on the Wildcat 4X is $20,999.  Read More:Arctic Cat Wildcat 4 Review.

The Wildcat 4X has the most suspension travel and longest wheelbase of any four-seat UTV. The tried and true Can-Am Commander was the Canadian manufacturers only side by side for a number of years and there’s a reason it’s still in the line up as both a two and four seat option; it offers an affordable off-road experience that’s custom tailored to meet your needs.  Not everyone has an unlimited budget and not everyone is concerned with being the first person up the tallest dune.  The Commander Max DPS offers price and performance specific options with its two available v-twin engine configurations.  A 71 horsepower 800cc model for just $15,299 or an 85 horsepower 1000cc model for $16,599. Both models feature Can-Am’s selectable Tri-mode Dynamic Power Steering, an automotive inspired cockpit and a very functional dual level cargo bed featuring an astounding 600 lbs carrying capacity.  27 inch Maxxis Bighorn 2.0 tires come standard and you can stay out longer with the Commander MAX DPSs 10 gallon fuel tank. The RZR 4 900 EPS takes over for the original RZR 4 800 and comfortable seats 4 riders and features industry leading Power, Suspension and Comfort. The 75 HP ProStar Engine delivers the power & acceleration you have been waiting for. With hallmark ProStar features like dual overhead cams, 4 valves per cylinder and electronic fuel injection we’ve upped the torque 14% and increased HP by 40% over the RZR 4 800.MSRP on the RZR 4 900 is $18,299.

The Polaris RZR 4 900 is the lightest of the four-seat UTVs that we compared. It slots in the middle of the pack for cost, horsepower, and size. Considered by many to be the ultimate trail machine, the Kawasaki Teryx4 is one of the only four seat models on the market that drives like a 2 seat.  Kawasaki engineers paid close attention to keeping the overall length of the vehicle in check without making the rear passengers feel too cramped.  We’ve spent a good bit of time behind the wheel of the Teryx4 and if we could sum it up in a word it would be tight. Tight steering, smooth acceleration and and overall precise handling without any of the clunks or rattles from loose or misfit components.  For 2016 the Teryx4 received some aggressive styling updates as well as a redesigned cabin which included a new tilt steering column and tool-less drivers seat adjustment.  The inclusion of FOX 2.0 Podium Piggyback shocks as opposed to generic gas charged shocks shows that Kawasaki is unwilling to compromise in performance just to save a few dollars.  The Teryx4 feels tough and considering it comes with an industry leading 3 year warranty, there’s little doubt that Kawasaki built it to handle abuse.  Although the Teryx features a smaller power plant than several of the vehicles on our list, its modest price tag will provide loads of fun for a family of four at just $15,799. Read more: Kawasaki Teryx4 Review.

The Teryx4 is the cheapest 4-seater, has the smallest engine and is second shortest overall. Like the Can-Ams, the Teryx4 has a more upright seating position. With a 1000 pound bed capacity, the Honda Pioneer 1000-5 may be more utilitarian in its nature but as the largest displaced side by side from a Japanese OEM, we wanted to include it as an option in our four seater feature.  In fact, passenger capacity is one area where the Pioneer 1000-5 has a leg up on every other model in our review, providing room for five total occupants thanks to its QuickFlip rear seats that pop up from the cargo bed.  One of the shining lights of the Honda Pioneer is its Dual Clutch Transmission, the first of its kind to be found in a UTV.  The 6 speed fully automatic transmission provides smooth, on demand torque while eliminating the inconvenience of a broken or slipping belt.  Additionally the Pioneer features a selectable manual transmission mode allowing the driver to utilize paddle shifters on the steering column; putting even more control of the vehicle’s performance into the drivers hands.  The Pioneer provides 10.5 inches of front suspension travel and 10 inches in the rear with 12.4 inches of overall ground clearance.  Whether you’re working or playing, the Pioneer 1000-5 is ready for either at an affordable price of $16,199.

The Honda 1000-5 is the heaviest, shortest overall and has the shortest wheelbase. It is also the only 4-seat side-by-side with an automatic transmission and the only vehicle capable of hauling 5 people. 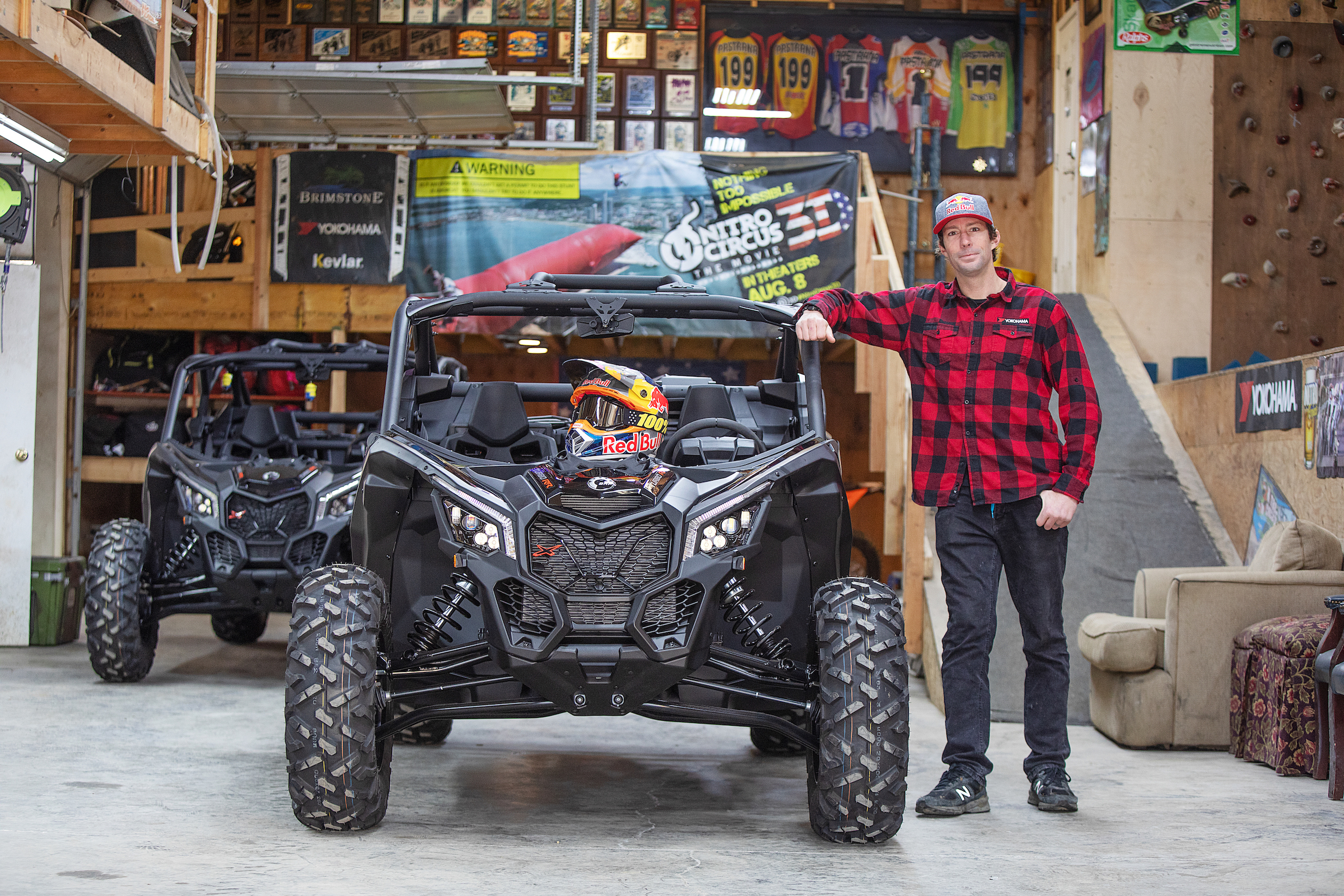