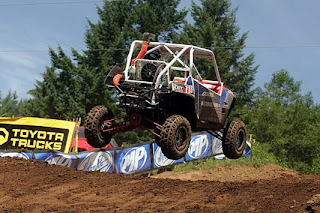 Summary – Side by Side Race

It was a busy weekend for the National Guard Polaris Coastal Yokley Side by Side Racing team, as they traveled straight from the Heartland Challenge in Carlisle, Iowa on Friday to the Washougal MX Park in Washington for Round 6 of the 2011 WORCS series. With little sleep, the team prepared for the race. The course includes parts of the historic Washougal Pro Motocross course with big jumps, and woods sections in the scenic Washington hills. The weather was perfect with low humidity.

The 45 minute Side by Side race began with the National Guard Polaris Ranger RZR XP900s running 4th and 5th heading into the woods sections. William Yokley overshot a turn and lost several positions, and Scott Kiger worked his way up to 2nd place after 2 laps. Scott had a brief delay on course while William had passed up to 2nd place. On the last lap, Yokley passed for the lead going into the woods, and was able to stretch it out for his first overall WORCS win of the season. Kiger finished 3rd putting both National Guard machines on the podium.

Yokley increased his season point lead with the win, and Kiger moved up to 3rd in points. It was a very good day for the team! On Monday, the team went riding in the Oregon sand dunes and had a blast. They talked to many other riders in the area, and showed them the new XP900s. It was a good end to a long weekend!

National Guard Coastal Yokley Racing ATV Team Rider Jarrod McClure was anxious to get back racing after several weeks of summer break. The start used the pro motocross starting gate, which makes for a crowded first turn. Jarrod was 7th after one lap on the MX course and heading into the woods. The MX track was perfect with loamy soil that had been watered, but the woods sections were pretty dusty with everyone nose to tail on lap 1. Jarrod was able to move up once the riders spaced out some. He rode a strong race eventually finishing in 4th place, his best finish this year in the series. Jarrod is now 6th in season points, and his next race is on September 10 at the Unadilla GNCC in New York.