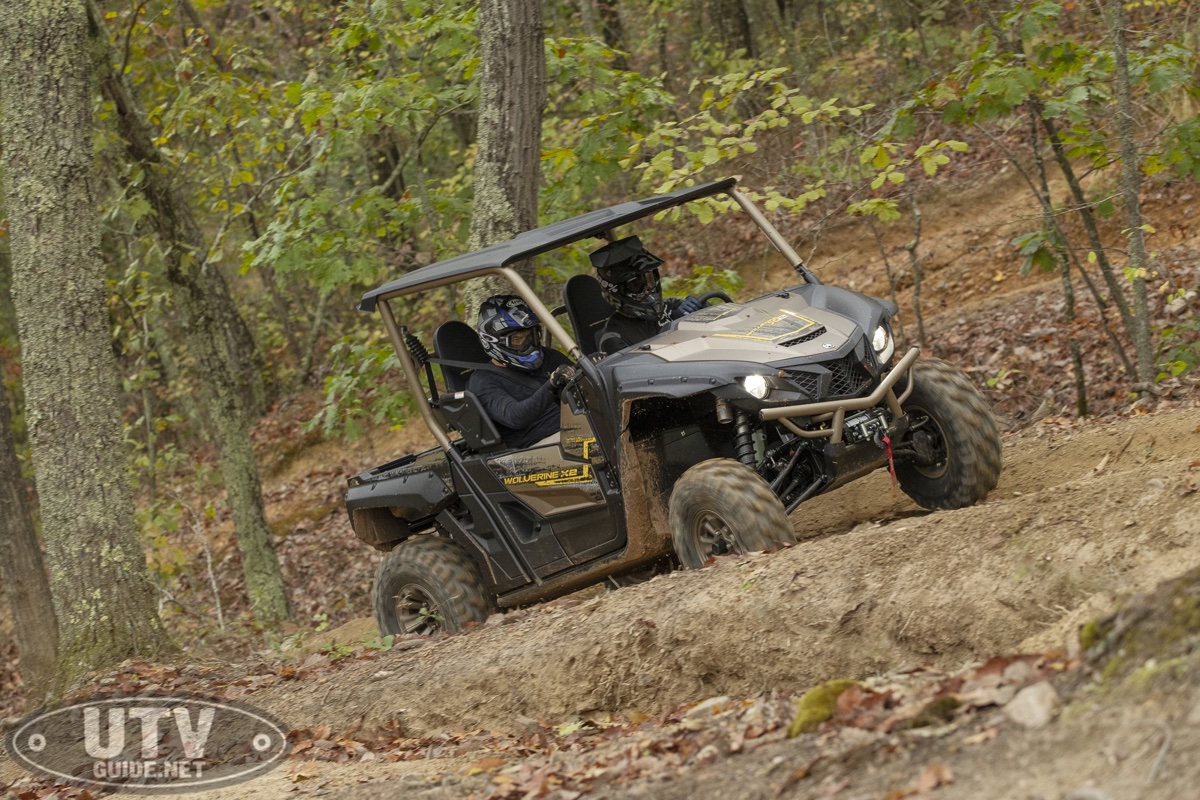 Yamaha has been on the gas improving their SXS models in recent years and with the introduction of the XTR or Xtreme Terrain line of SXS special edition’s they have begun to focus on even tougher trails all over the US. The Yamaha XT-R challenge began a new setting for Yamaha and the event that is held in the Hurricane Mills town in Tennessee is well known coming into its second year. This event is built around legendary country music star Loretta Lynns home place and the man made as well as natural terrain there puts the Yamaha machines to the test. With the release of the XT-R Yamaha Special Editions we had a very good reason to meet up with them in Alabama and take the machines for a rip.

Most would give the Wolverine X2/X4 as well as the YXZ1000R SS a quick glance and think that although the dress code looks different that nothing else would be changed on these models. That would be a huge mistake on their part as Yamaha has worked to improve their SXS line so these machines can give you more on the trail. We know that many of you have already looked over the XT-R packages, but it is worth reviewing for those who might have missed it so here it is. 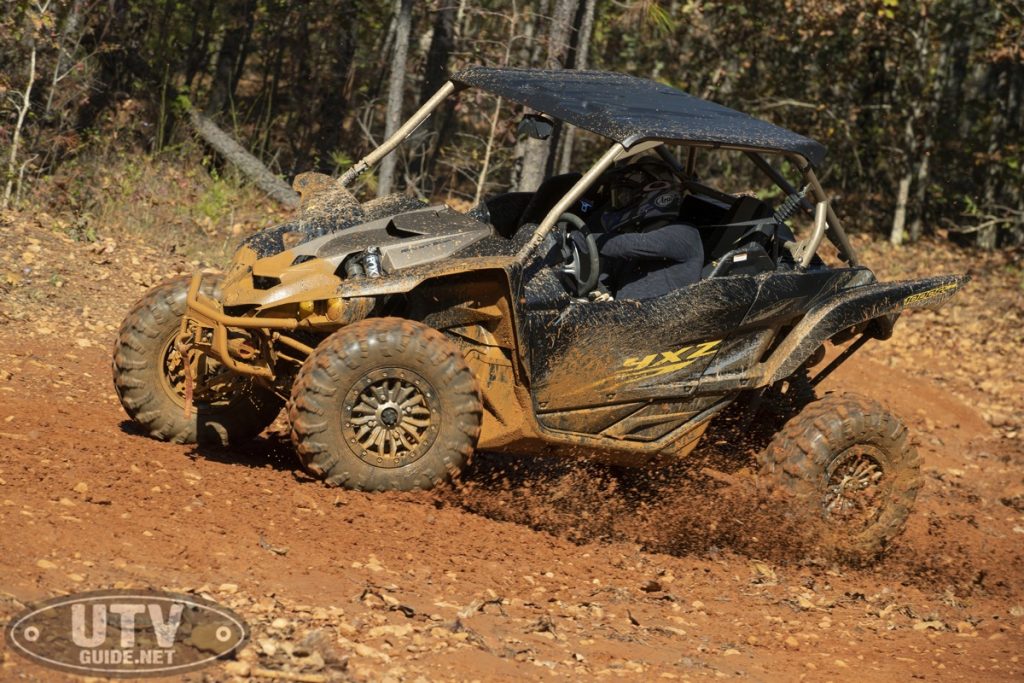 Starting with the YXZ1000R SS you will find that the new style front bumper is built stronger to handle a larger 4500lb Warn Winch. The Titanium Bronze and Tactical Black coloration also gives light to the XT-R package. Add in the interior accent lights, revised rear view mirror and the ominous looking front grill auxiliary lighting and you have a very sharp YXZ1000R SS model. Let us not overlook the 29-inch Carnage tires specifically developed for Yamaha by Maxxis either as these add height and strength to the package. Mounted on 14-inch cast aluminum wheels coated in the Titanium Bronze, this tire gives the YXZ even better approach and departure angle as well as adding to the YXZ’s ground clearance. Slipping into the cab of the XT-R YXZ1000R SS you will also find it is the only model with color matched seating. 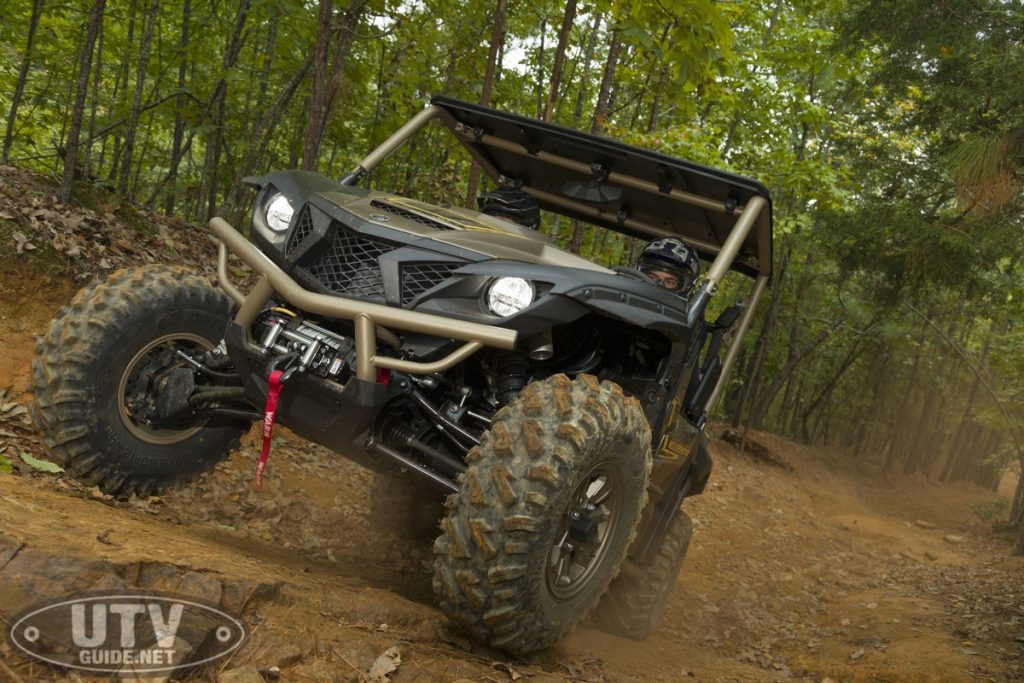 Looking at the Wolverine family Yamaha has made the biggest changes here. The frame has gotten a complete make over on the front and rear with the idea that strength and better suspension taking the front seat. Starting in the front, Yamaha wanted to build up the armor of the Wolverine X2/X4 with the ability to properly utilize a 4500lb winch. The WARN VRX factory mounted winch gives you the help you need when you run out of real estate or talent. Whichever comes first. On the rear of the Wolverine models Yamaha has redesigned the suspension and essentially widened the back by 2-inches as well as lengthened the wheelbase by one inch. This width makes the Wolverine square and 51.2 inches equally front to rear. This also makes more room for those larger 28-inch tires should you want to add them down the road. 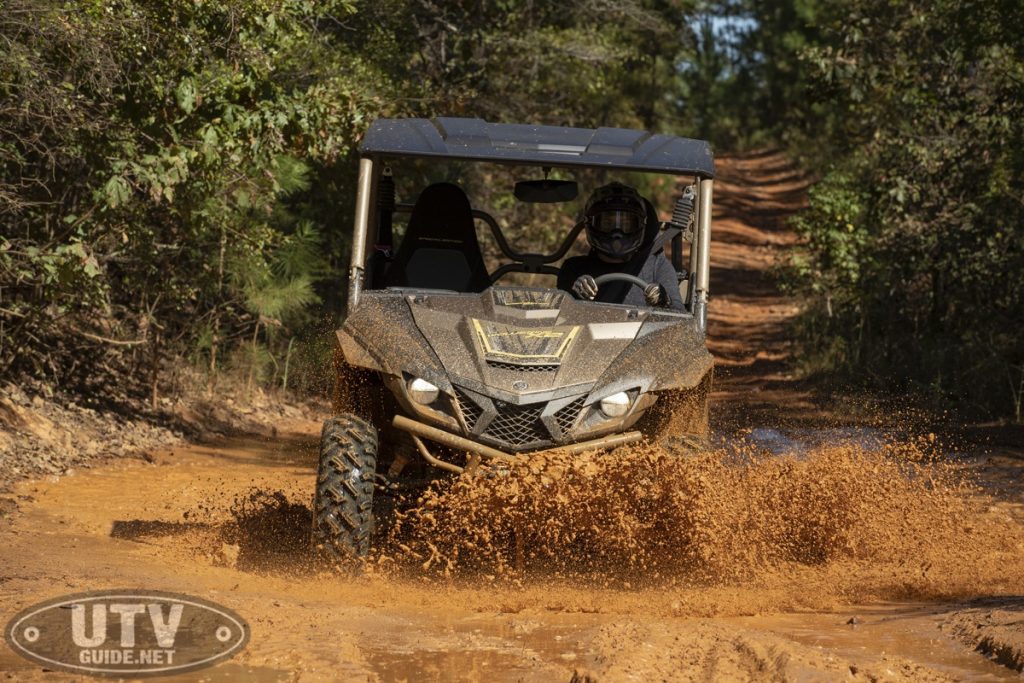 Speaking of suspension, Yamaha also added the KYB fully adjustable shocks to the front of the Wolverine X4 so you can tweak your ride to what works best for you. The self-leveling shocks will remain on the rear of the X4 model Wolverine. The Wolverine family gets a new set of shoes as well with the 27-inch GBC Dirt Commander tire mounted on a 12-inch cast wheel colored in the Titanium Bronze. These 8-ply tires should be able to handle most any terrain and the rubber compound will have them lasting forever in most riding conditions. Of course, these XT-R packaged special edition models are set up for the Adventure Pro GPS device should you decide to add it to the cab.

Our riding location for the “official” testing of the changes given to the Yamaha XT-R model Wolverines as well as a little time in the YXZ1000R SS was the Top Trails in Talladega Alabama. This would be our first time riding here and we found the history of the ride site to be just as good as the trail conditions. This facility covers about 2800 acres and was once home to a military ammo storage unit. The woods here have very old and degrading pavement sections left from the military use years ago. The trails just off these roadbeds lead into the hills of the Gents mountain where the terrain gets much steeper and technical. There are old concrete ammo storage units here that from the air, look just like the woods around them. They are buried in trees and wooded sections of the overgrowth but that would seem to have been intentional. The WWII era facility is known to the government as the Coosa River Storage Annex and the “Igloos” litter the property showing signs of days gone past. If you want to try a night of camping in the igloo ammo housing it is available and if you love the place enough to call it the only place to ride, word has it that you can rent an igloo and keep your stuff inside until you get ready to ride again. This park is open to Hikers, bikers and of course Off-road riding of the ATV/SXS kind. There is no full-sized vehicle allowance, however. Sorry Jeepers.

Starting the morning in the Wolverine family of off-road rigs it was clear that something had changed. Although only a slightly different ride was apparent after a couple of hours of riding. The Wolverine did however have characteristics that set it apart from years past. The Wolverine is a very quiet, extremely nimble driving side by side that lends itself very well to tight trails that have very snug fitting trees on the outer edges even with the slightly wider stance. Even in the Wolverine X4 it was clear that a slightly more stable ride was had but at the speeds we were riding through the trees our focus was on just how well the machine handled every corner. The KYB’s on the front of the X4 Wolverine seemed to be set up well for “out of the box” performance. Just like the rest of the industry we still love the 850 twin’s smoothness and the ability to talk to our passenger is always a bonus. Both the Wolverine X2 and X4 machines interior is very quiet in comparison to others in the same segment. The 27-inch GBC tires grabbed at the ground very well and seemed to provide ample traction in the slick damp red clay surfaces. There were some serious rock garden and the knife-like edges of these rocks had this driver concerned of flats but even though we carried speed through these areas there was not one issue all day long. The complete package of XT-R Wolverines is sure to get attention and rightfully so.

After a short break and about 30 miles of riding it was time to get back under the wheel of the YXZ1000R SS. This rig is well known and the gearing as well as XT-R package seems to suit the Yamaha Pure Sport SXS very well. There were not as many features added to the YXZ but the addition of a redesigned rearview mirror helped us keep an eye on the rigs behind us. The 4500lb WARN winch is also sure to get some good use at some point and knowing the front bumper is strong enough to handle the pull of that winch is reassuring enough. The property at Top Trails had gotten some rain in the days prior and there were some muddy sections of trail. The YXZ1000R SS has an advantage in these situations however as the radiator is relocated to the rear of the machine just in front of the cargo area. You might recall there is also a system of vents that pulls air from two sections to keep the radiator cool. One thing we did notice is how much we missed the protection of the fenders on the Wolverines as compared to the YXZ.

Our ride took us about another 30 miles around the rocky and steeper sections of the Top Trail location. There are some serious climbs out in those woods and we even came up on a section of mountainside that looked to be used for some serious rock climbing/bouncing. As enticing as it looked, we steered away from those incredibly steep and somewhat straight up areas for the sake of a machine which we did not own! On the sections of rocky terrain that we decided to challenge the new 29-inch Carnage tires by Maxxis grabbed at the rocks and gave us a very nice approach and departure angle. The tires seemed to always touch the obstacle first and last both coming and going. Hopefully we can get more time with the YXZ1000R SS and the Carnage tires to get a better feel for how they wear in the long run.

The Yamaha XT-R package of special edition machines not only gives Yamaha loyalists something to be proud of, but it also is a great package of adjustments to the Wolverine and YXZ family of Adventure machines. It’s always good to see advancements and companies that are willing to continually improve their off-road fun. 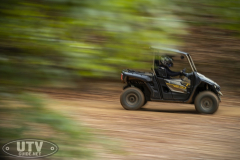 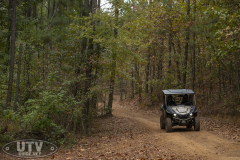 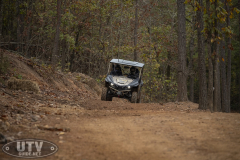 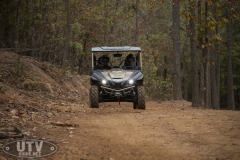 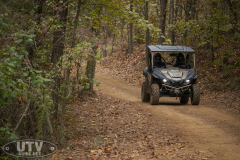 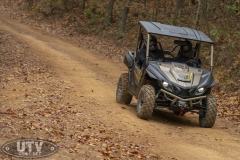 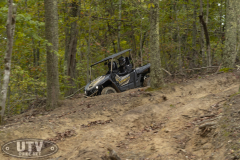 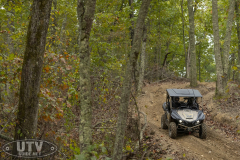 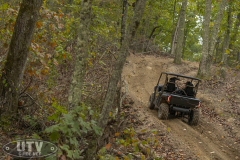 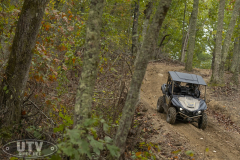 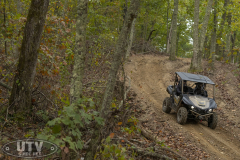 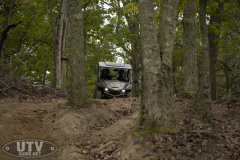 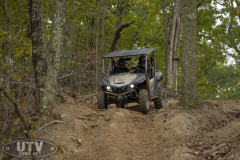 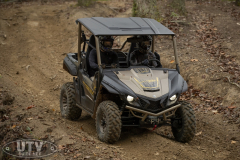 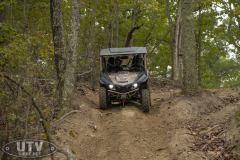 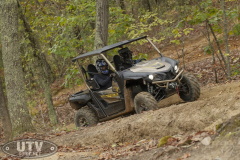 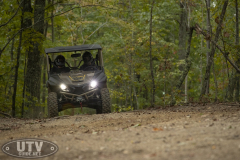 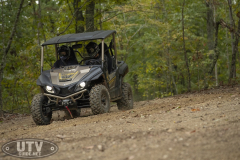 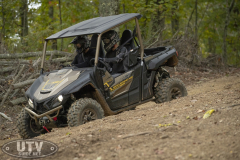 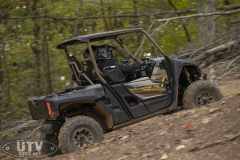 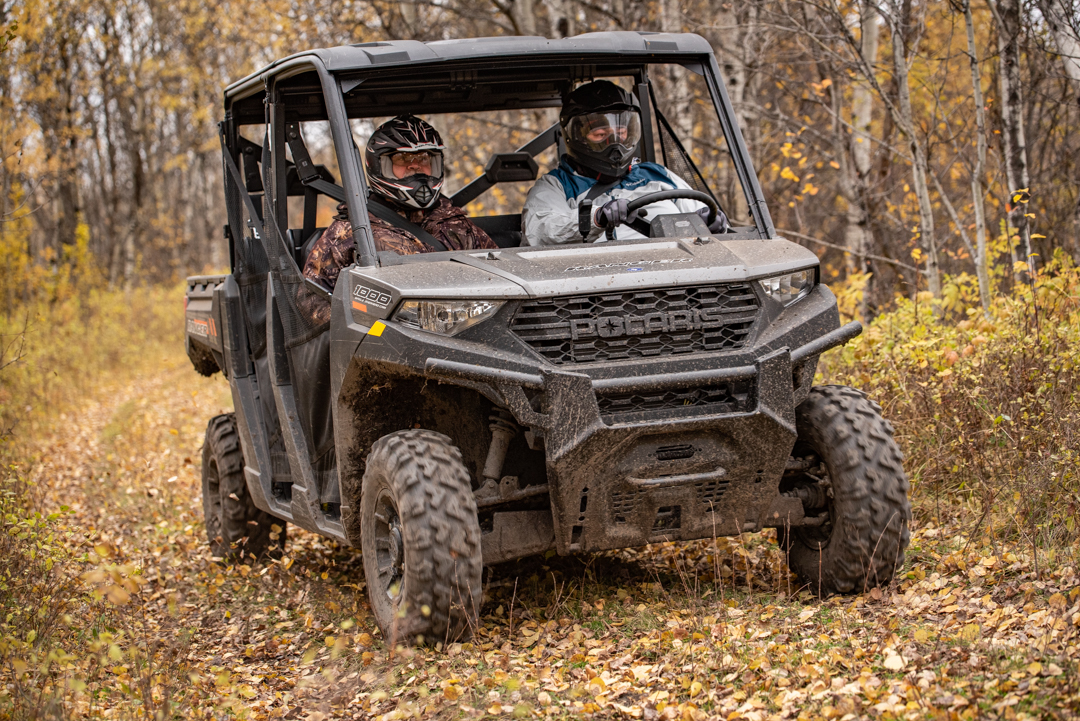 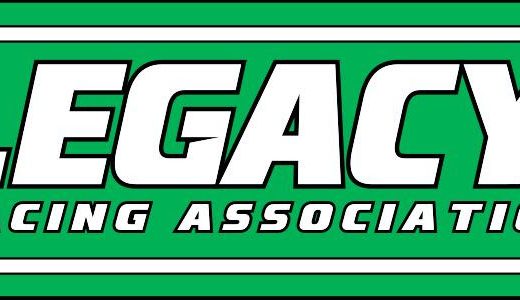 A NEW SERIES IN OFF-ROAD IS BORN – LEGACY Racing Association