The 2013 WORCS Racing series kicked off with a mud fest at Canyon Raceway near Phoenix, Arizona.  Here is a race report from last year’s Production 1000 winner, Ryan Piplic.
After a highly anticipated weekend of racing my brand new Cognito Motorsports built Polaris RZR XP 900. The first ride was in practice on Friday at Canyon MX for the first round of the WORCS series. It was nice to get out on the track to dial in my custom built shock setup provided by FOX Shocks. After the second practice the car felt very comfortable and I was confident I could win the first Pro Production SxS race.

I went into qualifying knowing that starting on the front row would be very beneficial to my race. I qualified 4th overall behind Beau, RJ and Nic which staged me in the front row for Saturday’s race. I was excited to go racing when the rain started Friday night. In hopes of the track conditions being perfect it went from perfect to mud fest due to nonstop rain all day Saturday. The game plan changed from winning to survival mode to earn as many points as possible to help the championship in the long run. I spent Saturday waterproofing my car to endure the extreme mud and water conditions we would face during the race.

Staging began and gate pick would be crucial. In order to give my Maxxis Viper tires the best shot at the most traction, I chose the far outside due to six to twelve inches of mud throughout the middle of the starting line. The flag dropped and it was go time. My Maxxis tires hooked up well, I had a great jump and was in third place behind Beau and Nic. A few turns in there was a split line where my Tire Blocks would be a huge factor in my race. They allowed me to pass Nic and stay on Beau’s back bumper maintaining the quick pace I needed to keep up with him. i could keep the fast pace while dodging football size rocks knowing I could finish the race without any flat tires. With the mud it was hard to follow right behind Beau so I fell back a second or two to allow me to see as well as the possibility to capitalize if he made a mistake. That was nearly impossible with the two to three foot mud puddles we would be going through. This limited visibility forced me to take off my goggles. I could not maintain Beau’s pace without goggles forcing me to pit and get a fresh pair. Shortly thereafter the new goggles allowed me to make up lost ground. They only lasted about a lap and I went into survival mode and was trying to finish with the car in one piece.

A second place in these conditions would be as good as a win in my book with all things considered. On the fourth lap the wheel studs in the right rear wheel sheared off right before a steep, slick uphill where we reentered the mx track. The car luckily had enough power with three wheels to make it up the hill and I limped it back to the pit in hopes of finding the necessary parts to finish the race. Once the checkered was thrown my wife who was racing my 2012 championship car was the first to exit the track after time had expired. She came back to the pits where I took the parts of her car to fix mine. I reentered the track where I left beating the sweeper by seconds giving me another completed lap allowing me to get a finish rather than a DNF. On corrected time I finished in thirteenth place. The weekend wasn’t great but could have ended up a lot worse. I am looking forward to a dry second round in Primm, Nevada. 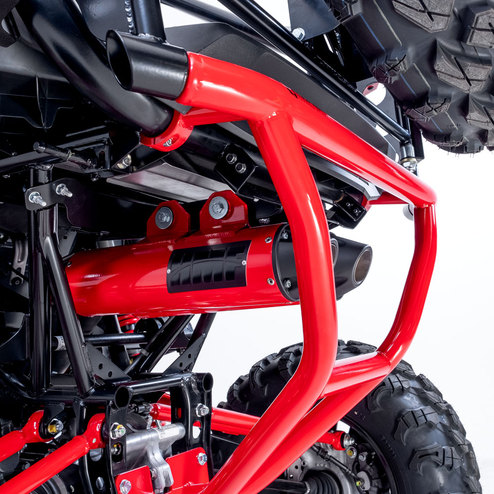