THE ROCKSTAR / POLARIS UTV WOLFPACK TEAM – In the Lucas Oil pit’s it’s business as usual for Wolfpack crew. They are always on point with a professional camp set up to represent sponsors and ice cold free Rockstar Energy Drinks for the fans to enjoy.

While they were wrenching on their Polaris RZR race machines, I stopped by to catch up and see what they have been up to lately.

“We actually have some really cool things in works, we recently launched a webseries titled “Wolfpackweekends” releasing the first Episode in May. Our goal with WolfpackWeekends is to show everyone what the UTV Lifestyle is all about. You can expect a dynamic story about builds, business and badass toys with some adventures on the weekends. In episode 1 we built this insane RZR with mattrack’s coined “The ultimate snowboarding companion”. We also already started filming Episode 2 Featuring FMX Rockstar Athlete Jimmy Fitzpatrick, everyone’s gonna go nut’s when they see what this lunatic has in mind your going to have to wait for Episode 2 of WolfpackWeeknds to see. We also have some other big things on the horizon, let’s just say the wolfpack is about to get MAD and we know the fans are going to love it! So stay tuned for #wolfpackweekends and follow the pack!” – Jeremy Merrell (Driver 977)

The Lucas Oil Regionals at Glen Helen was a heavily anticipated race by The Wolfpack Team, with a double header weekend at hand they knew they would have to bring their A-game to the table.

“With almost two months without racing, I was ready to hit the track and put the pedal to the floor in my Polaris RZR race machine” – Jason Merrell (Driver 918)

The Wolfpack Team Drivers George Hammel, Jason & Jeremy Merrell’s goal was get that wolfpack flag on the podium, working as a team. In a previous race George Hammel’s 4 wheel drive went out, the Merrell’s pulled the part off their 4-seat pit RZR to get him back on the track. This is the kind of teamwork, dedicated and commitment to each other we could expect from a team called The Wolfpack.

Saturday – Driver Jeremy Merrell had a good qualifying in the unlimited class starting in the top 5. When the Main event came around Jeremy Merrell put his Polaris RZR XP1000 from 5 place down to 3rd and was battling for a top 3 position, as his race progressed he was closing the gap towards the front when his radiator hose line failed due to the extreme heat and pressure forcing him to pull off the track. Jeremy ran a great race and that failure caused motor issues ended the weekend for driver Jeremy Merrell.

“Its amazing to see how these Polaris Xp1000 can perform in the top 3 in an unlimited motor class when his car has a stock motor!!!!! Just goes to show you how these machines out perform the competition.” – Jeremy Merrell

Saturday – From Fridays Practice with the car feeling a little sluggish they knew tweaks needed to be made on the car before Saturdays Qualifying. George and Ricky made some modifications to the 918 of Jason Merrell’s car and this made the car almost 1 second faster putting him to qualify in the top 7. All 29 Production 1000 race vehicles lined up heading down to the green flag in the main event Jason knew that starts are key. Steering wheels gripped tight everybody got bumper to bumper when the green flag dropped it was total chaos in the 1st corner with cars sliding into each other and vehicles standing up on two wheels rolling over, just getting pass the mess of cars or a pile up in the first corner is nerve racking. As the intense race progressed, Jason recalls watching 3 cars flip in front of him; cars were sliding all over the place. Jason stayed focused avoided crashes happing all around him, he would go on to finish the race in 7th place even after having some overheating issues from a mud filled radiator.

With a double header these guys work tirelessly all night wrenching to make fine adjustments. George and Ricky jumped right in to fine tune with Jason making tweaks to his car, the new set up advanced him to qualify 1 second faster than previously. When Sundays main event came out Jason Merrell held some great laps running down cars as he closed the gap to 5th place tracking down a podium he came around the 3rd to last corner Rahders, Templeton and Scranton where all battling a little too close. Jason stayed on the inside as they all got aggressive battling each other resulting in a black flag for one of the drivers.The last corner came up and all 3 drivers connected again, Jason had a feeling this was going to happen and cut on the inside again now coming down the finish line was Camp in 1st Rahders ,Templeton , Scranton and Merrell all within feet of each other trying to get that top spot. Jason Merrell finished the race in 5th place missing the podium by feet. As I headed back to our race pit my spotter told me a driver got black flagged dropping me to 4th place. Later we found out another vehicle did not pass tech moving the #918 up to 3rd place.

Saturday – George had a small wiring issue in qualifying that left him starting from the back of the pack, but knew if we drove smart and fast that we could move up towards the front. He started the race in 22nd position, over the first few laps he was able to move up into about 12th position, a caution flag came out and allowed the group to stack back up and helped him get closer to the top 10 drivers. Once the green flag dropped he was able to work up to about 8th, and he set my sites on the lead group. He was able to pass all the way up to 4th position, only a few feet away from a podium position.

Sunday – After a great finish from Saturday he was excited to hit the track and qualify well to get Sunday off to a good start. He had a clutch adjustment issue but was still able to qualify in 3rd position with a 2 row invert putting him outside the front row for the start of the main event. When the green flag dropped for the main event he was pushed wide in turn 2 and lost a bunch of speed driving out in the mud, but was still able to keep it 3 wide into the third turn, the second place driver had a very fast car and was able to drive around, but he held on to 2nd place and would keep a fast pace with pressure from Cody Rahders in 3rd. He had a great battle with Cody, but on the competition restart he made a mistake and bumped into the back of the RZR in corner 3 and broke the car so we could not finish the race. Cody is a great sportsman admitted his mistake and apologized. Once the dust settled a bit more heartbreak as the news that the leader was not allowing the tech inspection team tear his car motor (as all the top 3 were mandated to do), so he was Disqualified. There was a very good chance that we would have taken home a victory for the team Sunday, but luck was not on our side.

All in all George had a great weekend spending time with friends, helping each other to get our RZRs going faster and he leave’s knowing that he can now run at the front with the best drivers in the sport.

“I have always loved Glen Helen, riding motocross, breaking my back and becoming paralyzed at this place has always made me want to get some redemption! Every time I look at the big hills it still takes me back to the day my life would change forever. The best part about it is that I can look right back and say “I’m Back!” and jump in my Polaris RZR and hit the track. So hit the track is exactly what we did.” – George Hammel

Off-Road Enthusiast Tours for a Cure in Pink RANGER RZR 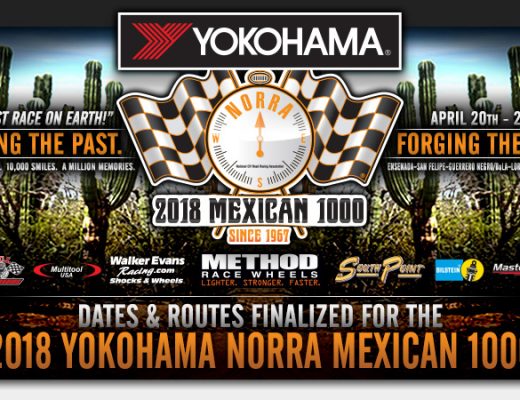