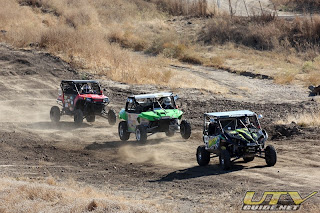 RENO,NV OCTOBER 18, 2010: With a full weekend of warm California sun shining down on the Prairie City OHV Park, round seven of short course racing had the crowd on their feet cheering. The track was slightly different at the newly renovated park adding some more mileage to the loop and increasing the overall speeds.

Sunday’s Car and Truck racing had the pits full of powerful vehicles. Each race was a battle, but there were clean sweeps by Sam Berri in Class 1, Patrick Timmons in Class 10, Brad Falin in Ultra 4, Gary Herrod in Class 11, Jay Schroeder in Class 9 and Tim Compton in the Pilots. They all impressively took top honors in all three motos for their respective class wins. Each moto consisted of six intense laps to make it to the checker flag first. 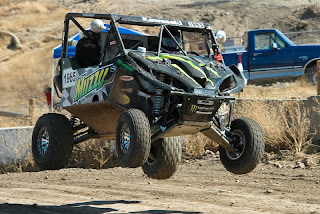 GroupT had a different winner in each heat race, KC Keller, Jake Povey and Mike Koenig, but it was Total Chaos Mike Koenig that took the overall win with two second places.

The biggest growth class for this year has been the UTV class with six cars showing up for the green flag. Stock and modified UTV’s set the pace around the track and battled for the win. The consistency of finishes put Jon Crowley on the podium with Rocker Head in second.

The season points battle continues to be close, with just one short course race remaining to crown the overall winners. Sam Berri pulled away in the lead with Mike Koenig in second only 16 points behind. Red Team Racing maintained their third overall position and first place in their class. It looks like all of the classes have some battles going on, but Class 10 will certainly come down to the final round to determine the winner. 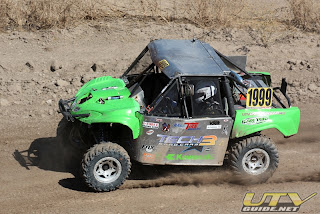 “This was another great round of racing,” exclaimed Wes Harbor, VORRA race promoter. “The Halloween race at the end of the month is always my favorite, not only is it the season end where the final points put the winners on the overall podium, but it is fun to see all the families here enjoying themselves.” The final round of the season will be at Prairie City OHV area October 30-31, 2010. Saturday will host the ATV race from PeeWee to Pros. Saturday night there will be a BBQ, costume party and kids pumpkin carving contest. On the track Sunday, there will be a powder puff and mechanic race after a full day of high horsepower racing.

You Tube Video of Round Seven: http://www.youtube.com/watch?v=yO5mofk8Gfg