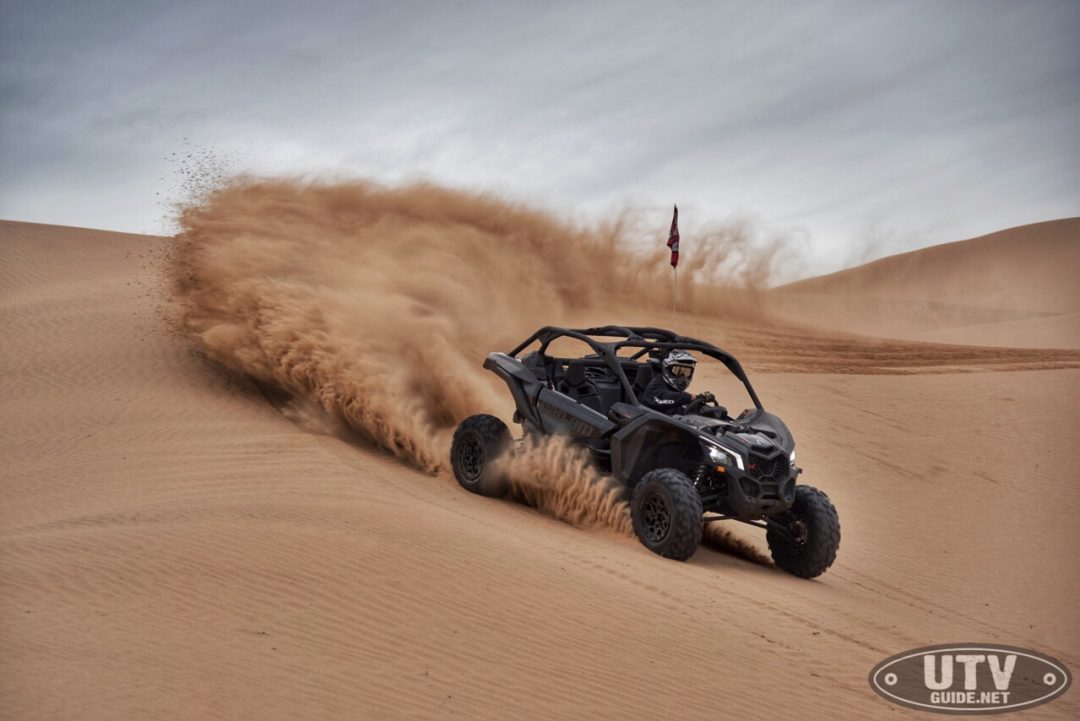 We spend quite a bit of time in the sand, flogging UTVs in many different build states and configurations. The cars we have the most seat time in, however, are the stock units. We test each UTV in our stable thoroughly in many different terrain types, with the SoCal Sand Mecca of Glamis being one of our favorites. Here, a stock car either achieves fame or is shamed, as the large sandbox proves to be a tall obstacle for some UTVs.

What makes a good dune car? There are many aspects of performance that are measurable on paper, but the chassis is the backbone that holds it all together. For this comparison, we are going to focus on three turbocharged UTVs, since the sand robs enough horsepower to make relatively quick cars feel slow. The Yamaha YXZ1000R and Arctic Cat Wildcat 1000 X receive honorable mentions here, but since they are farther down on power compared to the Polaris RZR XP Turbo and the Can-Am Maverick X3, we chose to leave them out of this comparison. The three cars we are comparing here are the Can-Am Maverick X3 X DS, the Polaris RZR XP Turbo, and the Polaris RZR XP4 Turbo. The idea of this comparison is to find the perfect-length chassis for dune car duty, assuming each car will have one driver and one passenger. Many duners (us included) have turned XP4 RZRs into 2-seat sand slingers, using the four seat platform’s larger wheelbase to smooth out the ride. Here’s how they stack up, stock for stock: As you can see, the Maverick X3 splits the RZR XP two seat and RZR XP4  four seat cars right down the middle for wheelbase length. Wheelbase is defined as the measurement (length) of the chassis from the front axle centerline to the rear axle centerline. As the wheelbase length increases, so does the vehicle’s stability, but the tradeoff comes in maneuverability. A shorter wheelbase car will generally turn more quickly, and require less room to do so. Long wheelbase cars are generally much smoother through whoops and chop, but do give up some low-speed turning capability.

If you’ve ever ridden in both the 2 seat and 4 seat variant of the same vehicle through rough terrain, it’s not hard to notice the difference in ride quality. Placing the wheels further apart means that the chassis has more time to react and recover from bumps before the next wheel set hits the same obstacle. Longer wheelbase cars also offer an increased moment of inertia in relation to the vehicle’s center of gravity, meaning that bucking and kicking motions will be more subdued with a longer car. When looking at these three examples, we can pick out certain behaviors that different wheelbase configurations offer. The shortest of the three, the RZR XP Turbo 2 seater, has the quickest steering response and feels the most agile. It also exhibits the most “bucking” of the three over uneven whoops or bumps, meaning the front and rear ends kick up, mimicking a bucking horse as the suspension reaches its limits. It also produces more wheelstands than the other two, as the vehicle’s spectacular power can rotate the car into a wheelie quite easily if there is enough traction to permit it. Throw a good set of paddles on a 2017 RZR XP Turbo, and any small rise in terrain becomes the perfect opportunity for a wheelstand. If that sounds fun to you, the 2 seat XP is right up your alley! Carving the dunes in a Polaris RZR XP4 Turbo

On the other end of the spectrum lies the XP 4 Turbo. This car is a full 27 inches longer than the 2 seat RZR XP Turbo in wheelbase, which does wonders for the suspension feel and stability of the car. Through the whoops, the XP4 turbo stays fairly level and feels very controllable. The downside is in the handling. The RZR XP4 has the largest turning circle, and doesn’t change direction as willingly as the other two cars. In large, flowing bowls, this is never an issue; and to be honest, the RZR XP 4 still handles incredibly well for its size. However, it cannot match the shorter cars’ ability to change direction quickly, as the chassis has far more length at either end of its rotation point. Then we get to the X3. With a 102 inch wheelbase, it sits almost exactly in the middle of the two RZRs. The X3 balances turning ability and stability very well. We chose to exclude the Maverick X3 Max 4 seater, as its 135 inch wheelbase is significantly longer than any other car in the comparison here, limiting its maneuverability (see Maverick X3 Max Dune Review for more details). The 102 inch Maverick X3 smooths out whoop sections better than the RZR XP 2 seater, and is much more agile than the RZR XP 4. As a stock dune vehicle, the Maverick X3 handles more comfortably than both of the RZRs.

Another benefit of a longer wheelbase is interior room. With more room between the wheels, there is more space for interior room. The X3’s cabin layout is the most comfortable, offering more leg room than the 2 seat or 4 seat RZR (front seat comparison). The benefit to the XP4 four-seater is back seat room.  If you want to haul more than two, you can.  Or use the back seats to haul an ice chest. One of our upcoming builds features a 4 seat chassis converted to a 2 seater to increase interior room, so check back on UTV Guide soon to see it!

The suspension setups between these three cars are similar, but the Maverick has a bit more usable travel than the RZR models. It boasts an additional 4 inches of travel up front and 2 in the rear, for a square total of 20. This allows the Maverick to maintain a very level attitude when traversing rough terrain, reducing pitching motions. The seating positions are also quite different. In Both RZRs, you sit slightly upright, with your outside leg bent at a 90 degree angle. The footwell is cramped because the RZR’s cab sits right over the front tires, making stretching your legs out impossible in a stock RZR. It’s not uncomfortable, but it isn’t as ergonomically sound as the Maverick X3’s laid-back, stretched-out cabin feel. The Maverick seat position feels more comparable to a sports car and the RZR feels more upright. Simply put, there is a ton more legroom for driver and passenger in the X3. On paper, the RZR Turbo should trounce all over the X3. At 168 horsepower, the 2017 RZR XP Turbo is the fastest turn-key stock UTV you can buy. However, the 14 horsepower difference on paper rarely plays out as dramatically as you’d expect. The X3 is no slouch, and at 154 horsepower, this turbocharged triple Rotax packs a hell of a punch. Any of these three cars are lightning fast- with a good set of paddles, it’s becoming easier to keep up with big V8 dune cars. The growth this industry has achieved in the last decade is incredible, isn’t it? As for the fun factor, you really can’t go wrong either way. The RZR’s parallel twin hits hard and sounds brutal, especially with a slip-on exhaust. The thump of the 925cc engine is reminiscent of much larger displacement machines, and it makes a unique and satisfying sound at WOT. The X3, on the other hand, is all high-tech whirr-pop-burble-hiss from its inline triple turbocharged Rotax. It sounds like a turbo sled at wide open throttle, and makes fantastic intake noise when you’re jamming on and off the throttle in the tight stuff. The fact that Polaris makes more horsepower with one less cylinder and four less valves is a testament to the design of the Prostar twin. In all, our favorite stock dune car for 2017 is the Maverick X3 X DS. It balances agility with comfort and stability the best of these three, with little bucking or pitching when terrain gets really rough. Of course, this is all subjective- you may not mind a little more fore and aft pitch in exchange for a car that has lightning-quick turn in and can wheelie on demand. If so, the RZR XP Turbo is your car. Another outlier is the new Arctic Cat Wildcat XX, which appears to have the same wheelbase as the Maverick X3. We have yet to drive that car, so we can’t comment on its performance. But if the RG Pro Edition Wildcat is any hint at how the XX will drive, Can-Am and Polaris may have some stiff competition! Another vehicle we haven’t mentioned is the Maverick X3 X rs. We haven’t had much seat time in the X rs in the dunes (see CAN-AM MAVERICK X3 X RS DUNE REVIEW), so we chose to compare the cars we had the most experience with.  That being said, we spent time in Glamis with TMW Offroad and SDR Motorports in March and both had customized Maverick X3 X rs that looked and performed very well. With an optimized wheelbase, comfortable cockpit, great power and long travel suspension, the Maverick X3 X rs is very intriguing. We hope to get more seat time and also start a full-tilt build in the very near future.