Riverside, CA 5/24/2011 – Walker Evans Racing rolled into Rounds 5 & 6 of the Lucas Oil Off Road Racing Series (LOORRS) with a new look, new truck, and more of the same winning ways. Glen Helen Raceway in San Bernardino, CA played host and a sell out crowd was in attendance as was a full field of competitors. A special tribute to Jeff “OX’ Kargola highlighted the weekends festivities, celebrating the life of the fallen rider and Super Lite Championship racer. Walker Evans Racing rolled out R.J. Anderson’s brand new V8 Pro Lite to compliment his Polaris RZR XP900 Unlimited UTV and #37 Super Lite truck. R.J. would do triple duty at Glen Helen with hopes of winning in all 3 classes and being the first to ever do so at Lucas Oil. Instead he would win races in both UTV and Super Lite but would come up a hair short in Pro Lite with a 4th place finish in Sunday’s Round 6 Main.

R.J. Anderson continued to set the Super Lite world on fire at Glen Helen. in his #37 Walker Evans Racing / SoCal Super Trucks/ Polaris Ind. Super Lite. First by coming out on Saturday taking the top spot on the box winning the Round 5 main and doing so while laying down the races fastest lap time. Anderson has quickly become a favorite to win the championship this season and the pressure for R.J. to do so is mounting. So far in every Super Lite race this season R.J. has shown why he is a favorite by continually running up front and competing for the win.

Sunday’s race looked like it would be a repeat of Saturday’s door banging win. R.J. would battle up front to start the race and just as he took over the lead he lost control sending the #37 into a violent tumble taking R.J. and his truck out of the race in Round 6. The wreck would be another in a series of turbulent accidents R.J. has been in this season proving that being fast can surely hurt should things go bad. Luckily R.J. would walk away from the wreck, bruised but not injured. Despite the DNF his 12th place finish should be enough to keep him on top of the points lead in Super Lite. Look for the #37 to be back in action at Rounds 7 & 8 in Utah!

Round 5 on Saturday would end up on a positive note despite not being able to make practice on Friday. R.J. and his team would roll the Factory Polaris Walker Evans Racing Polaris RZR XP900 out of the trailer and end up wheeling it to a 2nd place finish in Unlimited UTV just behind first place finisher and friend Tyler Winbury. Walker Evans Racing and engine builder Kevin Kroyer are working hard on a new power package to have ready for Utah but Round 5 was proof that the stock Polaris RZR XP900 power plant is still enough to compete with the best in the UTV class.

Sunday’s Round 6 race would be a highlight for R.J. and his Walker Evans Racing team. After battling all race long to fight through the pack of SR1’s and Unlimited UTV’s R.J. would find himself leading his class around the track and through the checkered flag for yet another podium finish and another first place trophy to add to his collection. This would give R.J. his 2nd 1st place trophy on the weekend and his 3rd podium appearance! R.J.’s Walker Evans Shocks seemed to hold strong allowing him to conquer the class and beat the track that so brutally beat up many others over the weekend. This was a much needed win for R.J. who is competing for a points Championship in multiple classes at Lucas Oil. Walker Evans Racing and Polaris will anxiously await the points release from Lucas Oil on Wednesday to see if R.J. has gained the top position in the Unlimited UTV points chase.

Pro Lite Unlimited
Saturday’s Round 5 saw R.J. and his new truck getting familiar with one another. The Pro Lite class is as exciting a class as any in the LOORRS series and is one of the most competitive. R.J. has one goal for Saturday and that was to see what needed to be changed and addressed on the new truck so that he could go out on Sunday and compete for a win. After only 1 lap Anderson and the team knew what needed to be done so back to the pits the truck went and quickly the team would go to work. Kevin Kroyer would spend time dialing in the engines tune and come Sunday the truck was ready for strong competition.

Sunday’s Round 6 would find R.J. slowly working himself into the race. As he worked on familiarizing himself with the truck it was obvious to both him and the team that they had got the new Pro Lite pretty close. As the laps clicked off R.J. got quicker and with half the race over R.J. began to make a charge for the front of the pack. He would get up to 4th place by the time the checkered flag would drop and as far as his team was concerned that was as good as a win considering the level of competition in the class, the amount of trucks competing, and it being their first real outing in a brand new machine. With this final test under their belt the team took the truck back to their shop located only miles from Glen Helen to give it a quick prep before loading it right back into the semi to send it and the team off to Red Bud Raceway in Michigan for the TORC season opener.

At Walker Evans Racing our goals is to design and manufacture quality, performance, race-proven products that can used for aftermarket applications. The very same product we produce is the very same product used on numerous race winning vehicles. Based in Riverside, CA Walker Evans Racing has been involved in the off road industry for over 30 years. 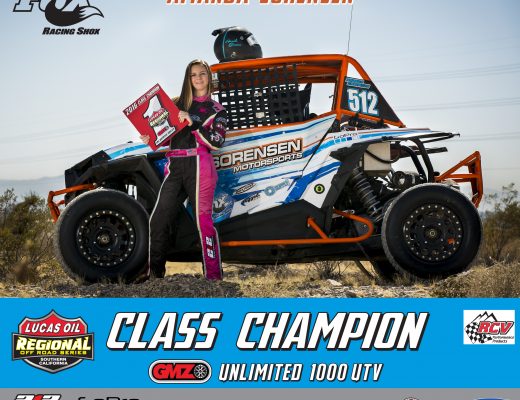