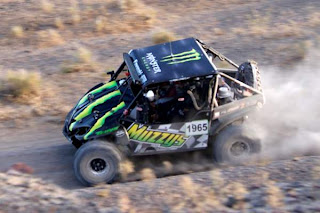 RENO,NV July 28, 2010: It was over 100 during the day, but it was a gorgeous 80 under the half moon that set around midnight on Saturday night July 17th. The winner, Sam Berri, was the only one to finish on Saturday just before midnight, reinforcing Wes Harbors original prediction that if you finished on Saturday you probably won the race.

There were over 40 cars, trucks, UTV’s and ATV’s at the race which consisted of a 41 mile loop that pro drivers had to complete 6 times to get their total 250 miles within the allotted 8 hours. “This is one of the more fun races of the year, not because the track is extremely difficult, but because of the atmosphere and challenge of the night,” said Wes Harbor VORRA’s director.

Light choices spanned from multiple high dollar extreme light bars to single bulb lights that tested the drivers eyes and the vehicles alternator to keep them running all night. Car and truck drivers had about 1 full lap in daylight and the remaining 5 in the setting suns shadows and the dark desert night.

Sam Berri was the first to cross the finish line, but only after quite a race with Shannon Harwell in Class 1. Berri didn’t have any communication with the main pit to know where he stood during the race, instead he maintained consistency and was finally able to pass Harwell for the win. Mike Koenig grabbed his first win of the season in Class T, beating Chris Gray by a nine-minute gap and placing third overall behind the Class 1’s. Third across the finish line and fourth on time was Class 10 competitor Kenny Ott. Ott retuned to defend his 2009 Class 10 win in this race and did so with his closest competitor, Red Team Racing, 45 minutes behind. The Class 10, 4-race winning streak of Patrick Timmons was broken with a DNF. The spectacular race was in the Ultra4 class where after 250 miles, and five and a half hours on the course, Brad Falin took the win over the Trent Fab car driven by Chris Ridgway by a mere 34 seconds. The three Class 11 cars showed up with Gary Herrod taking first, and Bill Jarvis took the win in Class 8. The strong Sportsman class had 9 competitors where Terry Shelton took another win with an 8-minute gap to competitor Tim Stockwell. Jon Crowley took his first desert win in the UTV class, closing in the class point on Dennis Jean who placed third. Earlier in the day, Brad Falin won the Pro Quad class and Steven Daniels won the Amateur Quad class.

The close of the Fallon 250 leaves one more desert race and two short course races before the end of the season. The season points battle continues to be close and will be all the way to the end. With the Class T win, Mike Koenig sits in first place with 379 points. Class 1 driver Sam Berri is one point behind, then Brad Falin in the Ultra4 class is in third at 357 points. Previous leader Patrick Timmons finished 6th in Class 10 at the Fallon 250 which dropped him to 4th place with 347 points.

Special thanks to the hospitality of the Stockman’s Casino for the excellent awards breakfast buffet and the prizes donated to the “Out of the Money” raffle which is an opportunity given to all of the competitors that didn’t place in the top 3 positions. They also sponsored the $1,000 purse bonus that paid the top 3 over-all racers a little extra for their efforts.

The next race is the Hawthorne 225 in Hawthorne, NV Labor Day weekend September 4-6, 2010. VORRA is in its 35th year of producing high quality yet affordable racing while also creating fun events around the race making it a great place to have friends and family enjoy the summer spectating or competing.