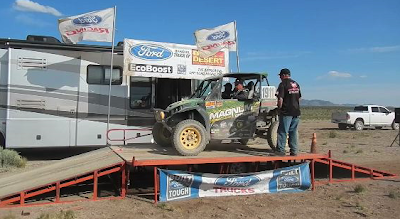 On May 4th and 5th the Vigor Motorsports/ Magnum Off Road Race Team participated in the Best in the Desert Canidae/Tap It Silver State 300 off road race, the third of the six race series. This event was a single day, single loop race for all BITD classes. As always, the Silver State course was truly epic, running through the pine topped mountains and desert valleys of east central Nevada. With its mix of terrain ranging from sand washes and rocky hills to vast silt beds and stream crossings the Silver State 300 was as always a true test of endurance.
Vigor Motorsports campaigned two John Deere Gators at this year’s Silver State 300, a John Deere Gator RSX 850i  in the Pro UTV class and John Deere Gator XUV 825i  in the DSR1 class. The RSX was driven by Scott Martinez and co-driver JD Bongiovanni and ran flawlessly most of the day finishing in 7th place. The only challenge was a nut falling off the front end at race mile 182. This resulted in a long slow limp in to pit six where the nut was replaced and the car continued the rest of way to the finish at race speed. Other than the one problem Scott and JD never had to get out of the car all day. This clearly demonstrated the durability of the new car. A special thanks to General Tire, since they did not have to change a tire the entire race either! This finish is a much needed lift for the team after a rough start to the season for this new car.
The second car, the newly reworked XUV for its new class, was driven by Matt Krimple and co-driven by Mike Mercurio. It didn’t fare so well. A front suspension pivot failed at race mile 97 and after limping the car in to pit three the car was repaired and going again only to have the repair fail a second time at race mile 197. This ended the day for the car.
Thank you to all of our sponsors, Magnum Off-Road, FOX, General Tire, KC Hilites, Method Wheels, PRP Seats, Team Clutch, Odyssey Battery, Competitive Metals, Lucas Oil, Piaggio, Big Gun Exhaust, Alba Racing, Summers Brothers Axles and Monster Seal Tire Sealant without your products and the support of UTV Underground, One Day Wraps, El Cartel Tequila and Stotz Equipment this result would not have been possible. As we do at all of the races, the race cars were on display at contingency to be viewed by all of the fans and spectators.
We are looking forward to the next race in the BITD UTV series, the General Tire Vegas to Reno. We will be on contingency row in Las Vegas at the Aliante Station Hotel & Casino, and as always out on the race course.
In closing, let me extend a special thank you to Casey Folks, his staff and volunteers, at The Best in the Desert Racing Association for putting on a great race.