Posted on July 21, 2016
The Rockstar Energy, Polaris RZR UTV Wolfpack team decided to make a transition into desert this year building a 2 seat Polaris RZR Turbo to race the BITD UTV class. The Merrell brothers grew up around desert racing, so the transition from short course to desert racing seemed inevitable. They spent the past 2 solid months building this Polaris Turbo beast from a stock machine into a battlewagon.

In which they debut the race RZR at The infamous Mint 400 race in Las Vegas, NV. The Mint 400 has been coined the toughest off-road race in North America, this race is extremely brutal not only for the drivers but the vehicle must be built tough to take the abuse.

Jeremy Merrell met Parker at our Maserati of Anaheim Hills, After briefly discussing our recent Mint 400 desert race and showing photos of the Polaris RZR he was blown away, intrigued and wanted a taste of the off-road experience.

Meet Parker Physique the humble, the gentle giant who is a beast of a man standing at 6’2 230 pounds and has the heart of a lion. Parker grew up in Virginia Beach and has pursued a body building career becoming an icon in the fitness and body building world with over 1/2 million followers in his personal social media network, he has become a familiar face in the fitness industry.

A few weeks past as the Merrell Brothers raced a Lucas oil short course race and prepared for the next Best In the Desert race. In the meantime Wolfpack had finally finished building the new suspension kit and were waiting on the shocks, when Reid from Walker Evans Shocks contacted the Wolfpack crew to let them know the new Velocity series shocks were ready for pickup. Excited and without hesitation they took a trip out to the Walker Evans facility in Riverside, CA picked up the shocks and quickly installed them we were ready to go test that next morning.

Jeremy Merrell remembered Parker’s enthusiasm and excitement about getting a chance to go off-road in the race RZR, so he contacted Parker that evening to see if he would like to go out for the shock test that next morning, Jeremy learned Parker had traveled to Brazil, Sweden, France, Germany, Holland and Norway, doing fitness shows, magazine shoots and autograph signings over the past few weeks. Although Parker was exhausted from traveling, jet lagged and tired he wasn’t going to pass up an opportunity to jump in the racecar and experience the scenic desert of California in an offroad race machine.

The Merrell brothers picked up Parker in Norco and headed North up the 15 freeway after a two hour drive they arrived Lucerne Valley, Ca. After winding down 45 minutes of rocky, windy, dirt roads they approached the dry lakebed and decided this would be a great place to set up for testing. The temperatures outside were cold and storm clouds were quickly approaching, they decided they needed to move quickly before the rain started coming down.

Once the Polaris RZR was unloaded, Parker and Jason Merrell suited up put on their helmets; radio checked and took off for the first test run. The Walker Evans Velocity series shocks were soaking up the whoops, and the Polaris RZR race UTV was running great.

After they pulled back into camp Parker was extremely impressed and excited about his new off-road experience and wants to get a Polaris RZR 4 seat for the family and can’t wait to go off-roading with the Wolfpack crew again soon. 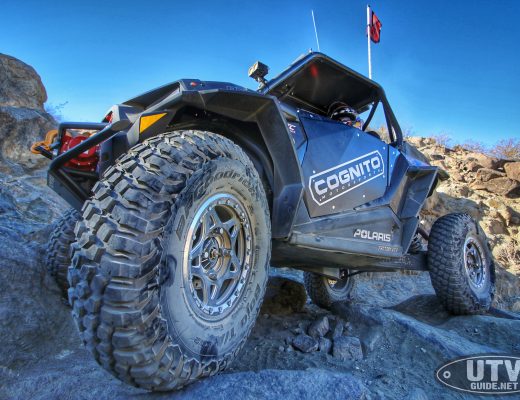 BFGoodrich Tires Garage Supports Racers at 2018 King of the Hammers