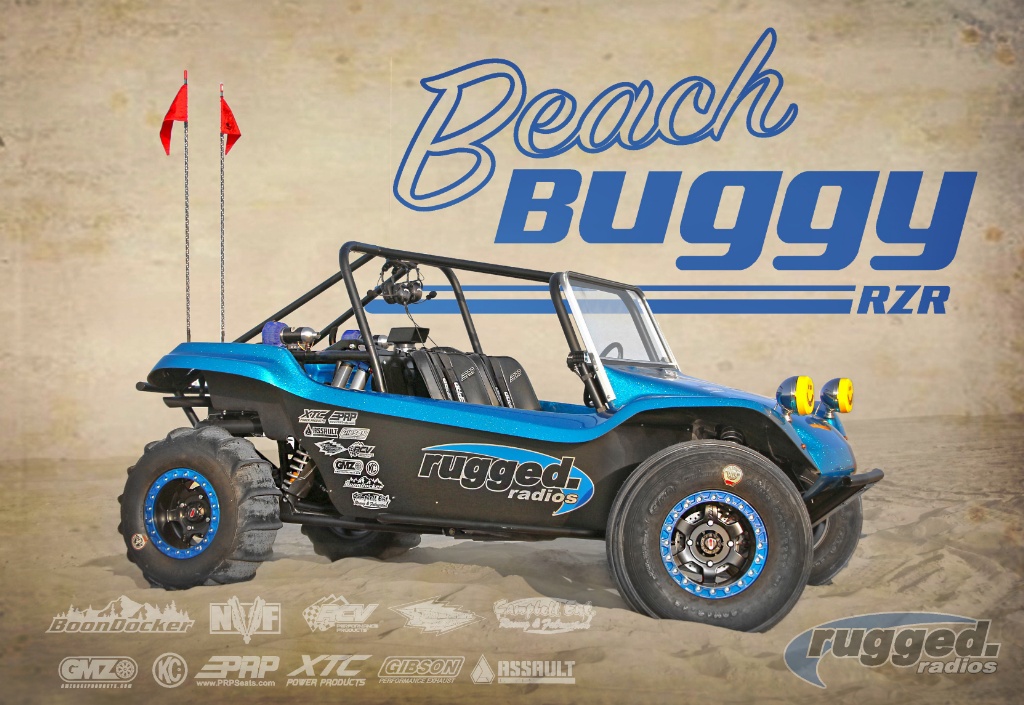 The king of old school gets a whopping dose of performance

When many of us hear the term Dune Buggy, a Bruce Meyers Manx car pops into our minds eye right away. The original buggy was developed in 1964 as a racing prototype, and continued production into the early 70s. A handful of fiberglass shops offer this classic look in a non-Manx platform, still bearing that iconic look that screams California. Being an avid off-road fanatic, Greg Cottrell of Rugged Radios decided he had to build his third custom dune buggy. This is no ordinary fiberglass tub car, however- this hand-crafted Beach Buggy actually started its life in a local dealership as a 2016 Polaris RZR XP1000. While most early buggies were built on a truncated VW Bug platform, this particular car is lighter, faster, and much more forgiving in rough terrain. We wanted to build something to top the Baja RZR says Greg Cottrell, President of Rugged Radios. Everyone seems to love that car, and we had to follow it up with something even more extreme. It was basically a full-frame build. We put extended trailing arms on it to match the wheelbase of the body. Essentially, the entire frame had to be hand-fabricated. Our goal was to build another iconic off-road classic racing-inspired car, and I think we nailed it! The build started back in May of this year, when Greg rolled a brand new RZR XP1000 into NV Fabrications shop in Grover Beach, California. Rugged and NV Fab are only a short distance away, so the collaboration between NVs Nick Valentine and Ruggeds Greg Cottrell was very hands-on. Greg spent evenings at the shop laying out cage lines and going over chassis modifications. In the end, the car had to essentially be built from the frame-up, as the fiberglass tub from MGM is not a simple bolt-on modification for a RZR. Pretty much the entire frame has been modified, minus the center frame rails says Greg. Lining up the seats, getting the B-pillars to look right; these things took a lot of time. Nick is one heck of a fabricator.

The front suspension geometry had to be modified first to allow fitment of the new fiberglass buggy body. Since they didnt want the shocks to poke through the hood, the shock mounts had to be repositioned to lay them down under the hood. Out back, the wheelbase had to be stretched by a whopping 4.5 inches to match the fiberglass bodys wheel arches. For this, they enlisted the help of the long-time desert racers at Campbell Ent. The entire back half of the car was reworked, including a set of one-off trailing arms proprietary to this car. Reid Nordin of Walker Evans built the shocks, which are 2.5 custom piggybacks that match the Rugged Blue color scheme. Once the chassis was finished and the tub was out to paint, Greg got the itch for more horsepower. A quick call to his friends at Boondocker Turbos led to a full bolt-on turbo kit for the Beach Buggy. The base kit includes a Garrett GT2860 turbo charger that can be upgraded to a GTX2860. The kit includes a stainless steel header and stainless steel tubular piping. Filtration is handled by a UMP Air intake, which feeds a custom Boondocker Water to Air Intercooler. On the exhaust side, the Boondocker header bolts right up to a Gibson dual exhaust kit, coated in ceramic black. Putting all of the Beach Buggys newfound power to the sand is a set of size-appropriate 30 GMZ Sand Stripper XL-HP paddles. The GMZ wheels and tires fill out the buggys wheel wells in a very aesthetically pleasing way. To ensure they dont get stranded with a broken axle, Rugged installed a set of RCV complete axles, which have been proven to hold up to extreme driving scenarios without breaking a sweat.

The interior had to be fabricated from scratch as well, as the MGM long pan buggy body lacks the mounting points for stock RZR seats. A set of custom PRP seats and harnesses absolutely nails the retro look without forgoing any comfort. A Lone Star sway bar and oversized under-seat fuel cell were also added. Rugged outfitted the Beach Buggy with their brand-new RM25R 25 watt mobile radio, which offers a very compact alternative to the standard Vertex or Kenwood 50 watt in-car radios usually bolted into UTVs. Also featured on the Beach Buggy is Ruggeds brand-new RRP660 Plus Bluetooth intercom controller, which allows both music and phone call streaming through headsets, external speakers, or helmets outfitted for coms. Lastly, a set of MAC 1 carbon fiber fresh air helmet pumps were fitted to the car for dusty operation. Rugged topped it off with a full street-legal turn signal and horn kit from XTC Power Products. Lighting was handled by KC and Whip It, with tastefully accented blue Flex array LED pods and massive Daylighter Chrome LED front headlamps. Two programmable LED whip antennas bolted to the rear of the pan help the car stand out in the moonlight. Other accessories include a set of Assault Industries radius rods, mirrors, speedo bezel, and fire extinguisher. This mesmerizing car is making its world debut at the Sand Sports Super Show in Costa Mesa, California this weekend. If you are in the Southern California area, make sure and stop by to take a look at this beauty in person- it may just take you back in time! 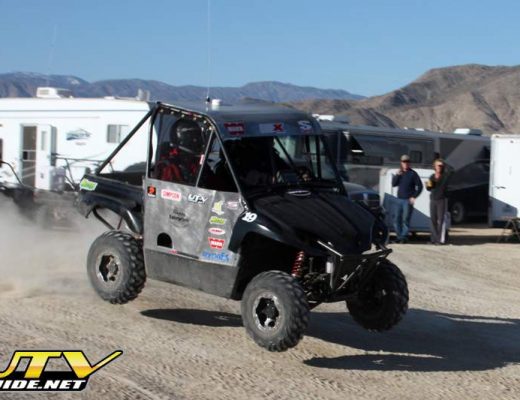 King of the Hammers Kawasaki Teryx