“ITP team racers had a dominating season in the BITD series, posting several wins and two class championships,” said Rhett Turpin, ITP Director of Sales. “We had steady, consistent performance from many drivers, including BITD Class 1900 P champion Johnny Angal, class runner-up Justin Lambert and the third-place Murray brothers team. And Lacrecia Beurrier concluded her championship run with yet another UTV Unlimited class win. All these teams ran the proven 30-inch UltraCross R Spec tires, which are made in the USA.”

The Henderson 250 is held in the Nevada desert outside of Las Vegas, Nev. The race not only serves as the BITD series finale, but also as a chilly reminder of just how cool the desert can be as temperatures often drop below freezing. The 2015 race saw a new record for entries as more than 215 total vehicles entered. Around 9 a.m., with temps slowly warming, UTVs (Pro and Unlimited) went off the line in the second group along with the Jeepspeeds, prerunners, Trophylites and the Ecotech 2400 class. This final leg of 2015 BITD season tour was also important for many because it would determine who took home the Class 1900 championship.

Although the S3 Racing / Can-Am team of Dustin “Battle Axe” Jones and Shane Dowden didn’t have a shot at the overall class title, the tandem could make another big impression on the field. After deciding to swap roles for the finale, Jones (now co-dawg) and Dowden (pilot) didn’t disappoint. The same duo who took home the class win at the historic Mint 400 found the top of the podium again, this time outlasting the Henderson 250 course and the 30 other competitors. S3 ran ITP UltraCross R Spec tires on their Can-am Maverick MAX and posted a two-lap time of 3:14:56.027 to record their second overall win of the year in their impressive rookie season.

UTV Inc.’s Johhny Angal has been there, having won the prestigious SCORE Baja 1000 as a rookie driver. Now, one year later, he has captured the BITD Class 1900 (Pro) Championship in his Polaris RZR XP Turbo dressed in ITP UltraCross R Spec tires. Despite a disappointing round in Henderson, Angal tallied enough points at the other six rounds to maintain his points lead. Angal and co-pilots Eric Ringler and Craig Hammar ended up using the finale as their throwout race. The team still won the class title by two points over fellow ITP-backed racer Justin Lambert.

Lambert and co-pilot Justin Sheakley, in the No. 1918 Cognito Motorsports / Polaris dressed in 8-ply, 30-inch ITP UltraCross R Spec tires, took fourth at the Henderson 250 to gain 107 valuable points in the chase for the championship. Their solid top-four finish and back-to-back victories at the previous two rounds wasn’t quite enough to push them to the top spot, but it was clear enough of a statement to rest of the field that they will challenge for the win at every event.

ITP earned a complete season podium sweep once the No. 1917 of Derek and Jason Murray (Can-Am / ITP / Murray Motorsports) earned their 38th consecutive BITD finish using ITP tires. The brothers’ fifth-place run was good for 106 points and helped them secure third place overall in the 1900 P season standings. When paired with their second-place finish in the SCORE series, the Murrays became the only Pro team this year to record two top-three finishes in both desert series.

Polaris / Lonestar Racing / ITP racer Branden Sims, with co-pilot Justin Krause, finished the finale in his No. 1913 XP1K, but ended up using the round as his throwout race. A consistent season, highlighted by round two victory, pushed Sims into fifth place for the season, giving ITP four of the top-five overall Class 1900 finishers in 2015.

With the UTV Unlimited class championship already wrapped up, ITP-backed racer Lacrecia Beurrier (DragonFire / Polaris) and co-pilots Chris Moore and Eric Beurrier didn’t let up at the Henderson 250. Instead, the team put their No. 2909 car into the winner’s circle yet again, putting a huge exclamation point on a dominating season. 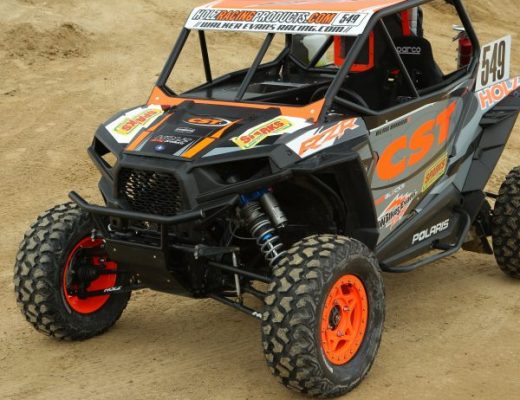