Turner Racing Gets Big Air at the Soboba GP 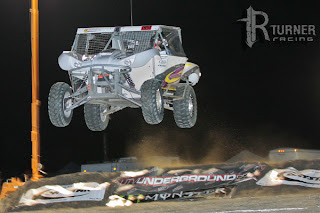 Never a team that takes breather, the Turner Racing team stayed on the gas after the BITD Parker 250 and quickly prepped the SR-1-powered Rhino for the Soboba Grand Prix. This race, put on by the Soboba Casino just outside of Hemet, California, drew racers from all over the Southwest for one reason: a total purse of $20,000! In addition to the GP, the Casino and Daystar also hosted a long-jump competition the evening before the race. Turner Racing was determined to get their fair share of the prize money and make a big splash in both events.

Despite a broken shock that put the team out of contention at the Parker 250, the SR-1 Rhino emerged from the desert race in surprisingly good shape. After thoroughly going over the car and fixing the mangled shock, the team made a number of changes to the car’s setup in order for it to better handle the extremely tight and twisty 6 mile loop of the Soboba Grand Prix. This race is set up differently from most others; instead of a set number of laps, the Grand Prix format at Soboba determines the winner by the person who completes the greatest number of laps in two hours. The course was a grueling combination of hillclimbs, drops, narrow canyons, and water crossings. Because it was so twisty, horsepower is not really a factor in the race and a stone stock UTV with the right suspension and driver stands just as good a chance of winning as a highly modified UTV. Horsepower plays a huge role, however, in the event’s land-rush start, where all of the competitors start side by side and charge for the first corner.

In addition to the GP, there was also the long jump competition. Sponsored by UTV Underground and Daystar, the long jump put a $1,000 bounty on the farthest jump, with another $1,000 kicked in by Daystar. Each competitor had three attempts to get big air. Held the night before the race, there was sure to be some action and Turner Racing did not disappoint.

After pre-running the GP course, it was found that the team had overshot the fix for the overly soft rear suspension on the SR-1 Rhino; instead of it being too soft, now it was too stiff. After making several more adjustments to the car, the team prepped for the long jump. It quickly became apparent that there were two competitors determined to go big: Tyler Winbury, and Mark Turner. Turner was last to jump and his first jump put him in the lead with a very impressive 88 feet, which was the new world record. On the next series of jumps Winbury delivered a nearly identical jump of 90 feet 8 inches. Determined to secure the world record, Turner held nothing back on his second attempt and launched off the jump at an estimated 80 mph. The UTV landed a record-shattering 91 feet away! Unfortunately, it also landed extremely nose-down, so much so that the front bumper dug in and sent the car into multiple endos and cartwheels. After rolling 7 times, the car came to rest on its wheels as the crowd continued to gasp after witnessing the horrific crash. The Turner Racing crew was at the car seconds after it stopped to see if Turner was OK. Amazingly, Turner was out of the car within seconds and climbed on the roof of the battered Rhino and waved at the crowd!

Other than a couple of bruises, Turner walked away completely unscathed. The Rhino was not so fortunate. While the main cage structure remained intact, the front and rear suspension were almost completely torn off the frame. There was no way the SR-1 could be fixed in time for the GP. Fortunately, the Turner Racing Unlimited Rhino, fresh from engine builder Benchmark Performance, had been picked up the day before. The crew turned its efforts to prepping the second car, which hadn’t been raced or even test-driven other than to tune the engine for the past several months.

On race day, Turner took his place among 41 other competitors for the land-rush start of the GP. Right after the green flag dropped, there was an enormous traffic snarl and Turner found himself right in the middle of it. Once it had cleared, Turner found himself in a disappointing 39th place. Determined as ever, Turner fought his way through the pack and had moved all the way up to 14th place by the last lap and was rapidly gaining on the leaders despite losing power steering shortly after the start of the race. Just when he needed a break, however, the engine began sputtering and blowing white smoke out of the exhaust just five miles from the end, indicating a blown head gasket. Turner ended up limping the car across the finish line in 17th place. It was not the podium finish he was hoping for, but the team was glad to get another finish under their belts.

The Soboba GP was certainly an eventful weekend for the Turner Racing team, and that’s what racing is all about! The crew has already gone to work on the Unlimited Rhino in preparation for the King of the Hammers on February 10th, a grueling race that’s sure to deliver plenty of action. As always, stay tuned!

Turner Racing would like to thank the following sponsors for their support:
Daystar Products · FST · Walker Evans Racing · Maxxis · UTVunderground

Check out the highlights video from Joey D of utvunderground.com plus, view more photos here