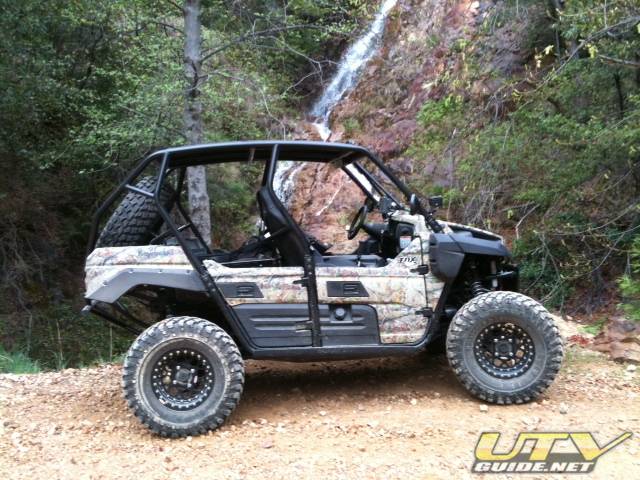 I recently had the opportunity to join Kawasaki and a few other editors for a ride at Chappie-Shasta OHV Area in northern California. I am in the midst of a full buildup project for our 2012 Kawasaki Teryx4 and was itching to try a few things out. This is the first time that I have been able to bring one of my own vehicles to a manufacturer ride, so I was pretty excited.

So far, I have added HCR Racing long travel, FOX shocks, Summers Brothers axles, SDR Motorsports cage, PRP seats and harnesses, Rigid Industries LED lights, Warn winch, Lowrance GPS, Roggy Enterprises bumper, Side x Side Outfitterz bed lift, SSV Works and Axia Alloys mirrors, Colorado Components tires & wheels, Benchmark ECU reflash, Roggy Enterprises rear seat storage conversion and Factory UTV skid plates. I have done a little bit of rock crawling with the Teryx4 and have been super impressed with the clutch setup. Wanting to push the limits a bit, I decided to swap in my 31″ x 15″ Pit Bull Growler LT tires mounted on OMF beadlock wheels for this ride.  I have used this setup before for pure rock crawling on the Rubicon, but never considered them for a trail ride. I figured this was a great opportunity to see how the stock engine and clutch could handle the big meat! Don Amador from the BlueRibbon Coalition and Quiet Warrior Racing was our trail leader for this ride and he was behind the wheel of a Teryx that he uses for land-use work. Beyond that, Kawasaki brought two Teryx4s, two Teryx and a Brute Force ATV.

Don Amador (BRC) and Sky Zaffarano (BLM) gathered us around and told us about the  Chappie-Shasta Off-Highway Vehicle area riding area. It is just 10 miles northwest of Redding, CA and  offers over 250 miles of roads and trails (from single track to graded dirt roads) on approximately 52,000 acres for off-road enthusiasts. Elevation within this area ranges from 600 to 5,000 feet with a wide variety of topography, soil, and vegetation types. The southeastern portions offer rocky and challenging terrain, while the more remote northwestern portions offer scenic views of Mt. Shasta, Lake Shasta, and the Trinity Alps.

Camping is even available adjacent to the staging area below Shasta Dam and from there you can ride OHVs, fish in the Sacramento River or ride bikes on the Sacramento River Rail-Trail all the way into Redding.  It really looked like a great place to bring the family and experience a wide variety of outdoor activities.

The trails are all marked with numbers and a symbol for difficulty level. We left the staging area below Shasta Dam and immediately started climbing on a trail marked “Easiest”. This trail led us up a tree lined road past a nice waterfall and then to a lookout area about Shasta Lake.  You could tell the view was spectacular, but unfortunately, we had some cloud cover. We continued on the trail and up into the clouds.  I really liked how we were experiencing lots of elevation changes.  It made the driving more interesting and I was able to test how the Teryx4 handled the 31″ tires. I was very happy to see that the clutching showed not signs of slipping, even in high gear from an inclined starting position.  These tires are huge and each corner is over 60 lbs. so that is an impressive feat. I could definitely feel the expected power loss from the extra rotating mass and taller gear ratio created by the larger circumference, but it did better than expected for a four-seater with a completely stock engine.

We stopped at the top of a ridgeline that was cleared for a fire break a few years back.  This spot had a 360 degree view of the area including Mt. Shasta and the Trinity Alps. We just got a few peaks of some of this because it was cloudy, but I could tell it would be a spectacular view without clouds. We had a great picnic lunch up top and talked more about the area and the capable vehicles we were driving before hitting the trail again.

The afternoon trails were tighter and more technical than the morning selection.  At one point, our long travel Teryx4 had just about maxed out the trail width as we descended back down to the staging area. Descending from the clouds with Shasta Dam in the distance

I am really happy I was able to check this riding area out.  Although it is only three hours from where I live, I had not been there before.  Always enjoy the opportunity to ride at new places, and I will definitely be back to do more exploring.  BLM has done a great job with the Chappie-Shasta OHV area, and it is refreshing to see a riding area on public land where you feel welcome as an off-roader.

It was also great to get out on the trails with my Teryx4.  This UTV is super comfortable and setup well to go explore for the day or overnight. Although the 31″ tires are a bit big for normal trail riding, the Teryx4 handled them well and I cannot wait to get out in the rocks on the Rubicon with it!

To see more details on our Teryx4, please go to: 2012 Kawasaki Teryx4 Buildup.

Kawasaki Motors Corp., U.S.A. (KMC) markets and distributes Kawasaki motorcycles, ATVs, personal watercraft, utility vehicles and recreation utility vehicles through a network of more than 1,350 independent retailers, with an additional 8,000 retailers specializing in Kawasaki power products and general purpose engines. KMC and its affiliates employ nearly 3,100 people in the United States, with 300 of them located at KMC’s Irvine, California headquarters.

Kawasaki’s tagline, Let the good times roll, is recognized worldwide. The Kawasaki brand has become synonymous with powerful, stylish motorcycles for over four decades. Information about Kawasakis complete line of recreational products and Kawasaki affiliates can be found on the Internet atwww.kawasaki.com. 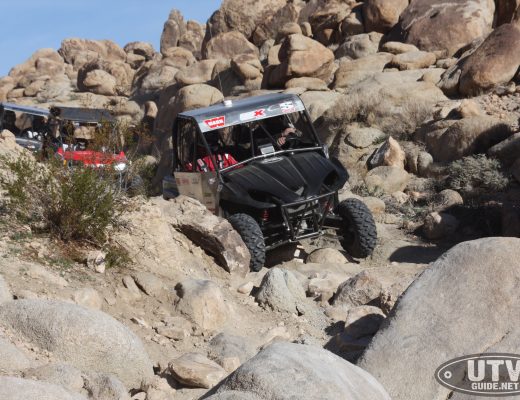