Northern California has experienced several years of drought, but the 2015/2016 winter corrected that.  The Sierra Mountains east of Sacramento have received above normal snow pack, and we have been patiently waiting for the snow to melt enough for a run on our favorite local trail.The Rubicon Trail is located in the California High Sierra, due west of Lake Tahoe, approximately 80 miles east of Sacramento, and 35 miles east of Placerville. This world-renowned 4-wheel drive route leads from Georgetown (at California Highway 49) to Lake Tahoe (near Tahoma), a total distance of approximately 22 miles. The trail is a non-maintained County road located in El Dorado and Placer Counties. Parts of the trail pass through the Eldorado National Forest and portions of private lands.

UTVs are allowed on this trail with a California OHV Green Sticker.  Helmets are also required per California state law.

Elevations run from approximately 5400 to over 7,000 feet (approximately 1,646 meters to over 2,134 meters). The section of road from Georgetown to Wentworth Springs (also known as the McKinney-Rubicon Springs Road) is a maintained road, while the off-highway vehicle (OHV) trail begins near Loon Lake. Most visitors begin the run from this mid-point, which is accessible off U.S. Highway 50. The portion of the trail from Loon Lake to Lake Tahoe is about 12 miles (19 kilometers) long and winds through the trees and rugged granite common to the area.

We brought our trustyPolaris RZR XP1000 FOX Edition and Polaris GENERAL. My son David and niece Brittany were in the XP1000 and my daughter Katelyn and her boyfriend Dan were in the GENERAL.

We have had our FOX Edition XP1000 for over a year and it rock crawls through the Rubicon and Moab like no other.  The 32-inch MRT X-ROX tires make a huge difference. The GENERAL on the other hand is very new. We outfitted it with Factory UTV UHMW skids, a Racer Tech lift, 30-inch Sedona Rock-a-Billy tires and a set of FOX 2.5 RC2 shocks valved by Shock Therapy. I was eager to see how it would do.

Since it was Memorial Day, we figured the trail would be quite crowded with groups of 4x4s making their way out so we didn’t plan to go too far in. While our UTVs are much more nimble and quick on the trail, there are sections where passing doesn’t work so well.  Instead of going far in, we took our time and enjoyed the scenery and took lots of breaks.

My son brought his DJI Phantom 4 so we could get some shots around the granite slabs, and I walked the whole way so I could do some filming with our DJI Osmo.

It was awesome to watch the kids drive on the trail. I truly believe that driving off-road makes them better drivers back on the pavement. 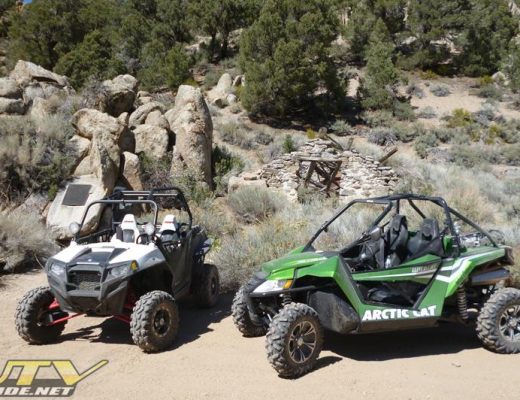 Vegas to Reno The Long Way