Camping on the Rubicon Trail

By Katelyn Crowley
Rock crawling is in my boyfriend’s blood, the mere sight of dirt, rocks and ruts is enough to get him excited; however, there is one problem. Hes been told many times not to off-road in his Toyota 4×4. He cannot afford to own and maintain two vehicles; one vehicle to get him back and forth to school and work and one for rock crawling. Luckily, my dad, has several UTVs capable of getting him through the Rubicon trail without breaking his daily driver.We decided to plan a two night family camping trip at Buck Island, only accessible along the Rubicon Trail. Even my mom, who isn’t much of a rock crawler, was coming along.

The day couldn’t arrive fast enough, as summer days grew hotter in the Sacramento Valley; the cooler air temperatures up in the mountains were appealing. Everyone was excited to hit the trail early before the gridlock of jeeps, trucks and UTVs blocked the narrow trail. Midweek was the perfect time to head to the Rubicon Trail head, no traffic east bound on Highway 50 and hopefully not too many people on the Rubicon Trail into Buck Island.

Ready to hit the trail

For a two night, three day camping trip the packing was light; tent, sleeping bags, Camp Chef dutch oven, Sherpa table, ice chest, tools and clothes. Getting all of our gear loaded up into the UTVs was challenging. While the two seat RZR XP 1000 is tight on storage space, the Teryx has a large bed with storage boxes behind the seats, perfect for storing our gear. By replacing the back seats for storage boxes in the RZR XP 4, we were able to spread the load out amongst the three cars for all five people. We loaded up and tied down the RZR XP 1000, Kawasaki Teryx and RZR XP4 1000 onto the trailer and were on the road.

Arriving at the Loon Lake trail head by 9:00 a.m., our group made quick time airing down the tires, putting on our helmets, grabbing bottles of water and hitting the trail by 9:30 a.m. On the trip with us was our friend Dave in his RZR XP 900, Miguel and his son in their Teryx4 and Mike and his son in his Teryx.

My mom rode in the Kawasaki Teryx driven by my brother. Earlier this year, my brother David gained valuable rock crawling experience driving in Utah during the Rally on the Rocks. In the Kawasaki Teryx, David made the trail look easy maneuvering up, over and around granite boulders. I couldn’t believe that my mom wasn’t nervous, usually she’s out of the vehicle walking the trail long before Little Sluice, yet this trip she was relaxed and enjoying the ride.

Miguel and my brother in Little Sluice

The long wheelbase of the RZR XP4 1000 challenged my dad’s driving skills around tight turns and narrow passages, yet the car performed well in the rough terrain that he decided to try it on Little Sluice. It was a little too long but my dad made it through. Miguel and my brother even drove up Little Sluice.

Our camp at Buck Island

We took our time rock crawling, stopping for water often. Because of our leisurely pace, we arrived at Buck Island close to 2:00 p.m. As you can imagine, by this time the whole group was hungry and ready for lunch. Everyone pitched in unloading the vehicles, setting up tents, arranging a camp kitchen area and making lunch. The Camp Chef Sherpa table made cooking a breeze with the padded rectangular compartments organized and labeled with cooking utensils, plates, extra propane, spices, and more.

My Dad whipping up some breakfast

We spent the day exploring, hiking and swimming around Buck Island reservoir. The scenery was breathtaking with pine trees, granite slabs, and plenty of wildlife viewing. Buck Island is a reservoir at an elevation of 6,417 feet, in El Dorado County that feeds the Loon Lake Reservoir. The water was chilly, yet refreshing after a dusty day on the trail. As the afternoon came to an end, we gathered around the campfire after dinner to indulge in my brother’s Dutch oven apple crisp. There’s nothing better than a full day of rock crawling, relaxing with family and friends and sleeping under the star under clear skies.

Cooking on the Rubicon with our Camp Chef gear

The following day, we drove the UTVs from Buck Island down Big Sluice, through Rubicon Springs, and up Cadillac Hill to Observation Point. The trail was more difficult than I anticipated, yet my boyfriend did well navigating around huge boulders in the RZR XP 1000. We both learned a lot about the capabilities of the RZR XP 1000 and gained valuable knowledge about ground clearance and picking a good line through some tough obstacles.

We had lunch up at the Observation Point and soaked in the awesome view. Clouds started to fill in the sky and the wind started to pick up so we decided to hit the trail and head back to camp. We made quick time going down Cadillac Hill and through Rubicon Springs. Then we hit a few obstacles on Big Sluice that slowed us down. My dad and Miguel were out of their UTVs and helping guide through a few tough spots. This was definitely the toughest spot on the trail, but we all made it through without incident.

Observation Point at the top of Cadillac Hill

Once back in camp, we settled in and relaxed. The wind had kicked up more and we were feeling a few sprinkles. We hadn’t really factored the possibility of rain into our plans and I could tell my dad was a bit nervous. He scurried around making sure the rain flaps were setup properly, but mentioned that if it rained much, we would all be getting wet.

The wind blew all night, but thankfully we didn’t get much more than drizzles off and on through the night. By morning, the sky was looking more ominous, so we quickly broke down camp and loaded up the UTVs. By the time we hit the trail it was actually raining. None of us had proper rain gear, and I was not looking forward to a cold and wet ride.

My mom and brother stayed nice and warm with the heated PRP seats in the Teryx, yet the rest of the group were a little chilly as the rain came down and soaked their clothes. Even though the trail was wet and slippery, the UTVs were performing well and we were making good time.

Wet and cold at Ellis Creek on our way out

As we made our way back to Loon Lake, my dad’s front left tire began losing air rapidly. Luckily some rock crawlers passing in the opposite direction stopped to help us so my dad didn’t have to completely unpack to get to his air compressor. We were back on the trail in no time and not long after we were at the truck loading everything up and headed back home. The heat in the truck never felt so good.

Although I have been riding with my dad in the past, this was my first camping trip in a UTV. The vehicles handled the extra load well and it was interesting to see how we utilized every little spot for gear and supplies. My boyfriend got to do what he loves without beating up his Toyota and it was also neat to have the whole family around the campfire without the distraction of our phones.

Next time, no matter if it is 100 degrees in the Sacramento Valley or not I will bring rain gear…. 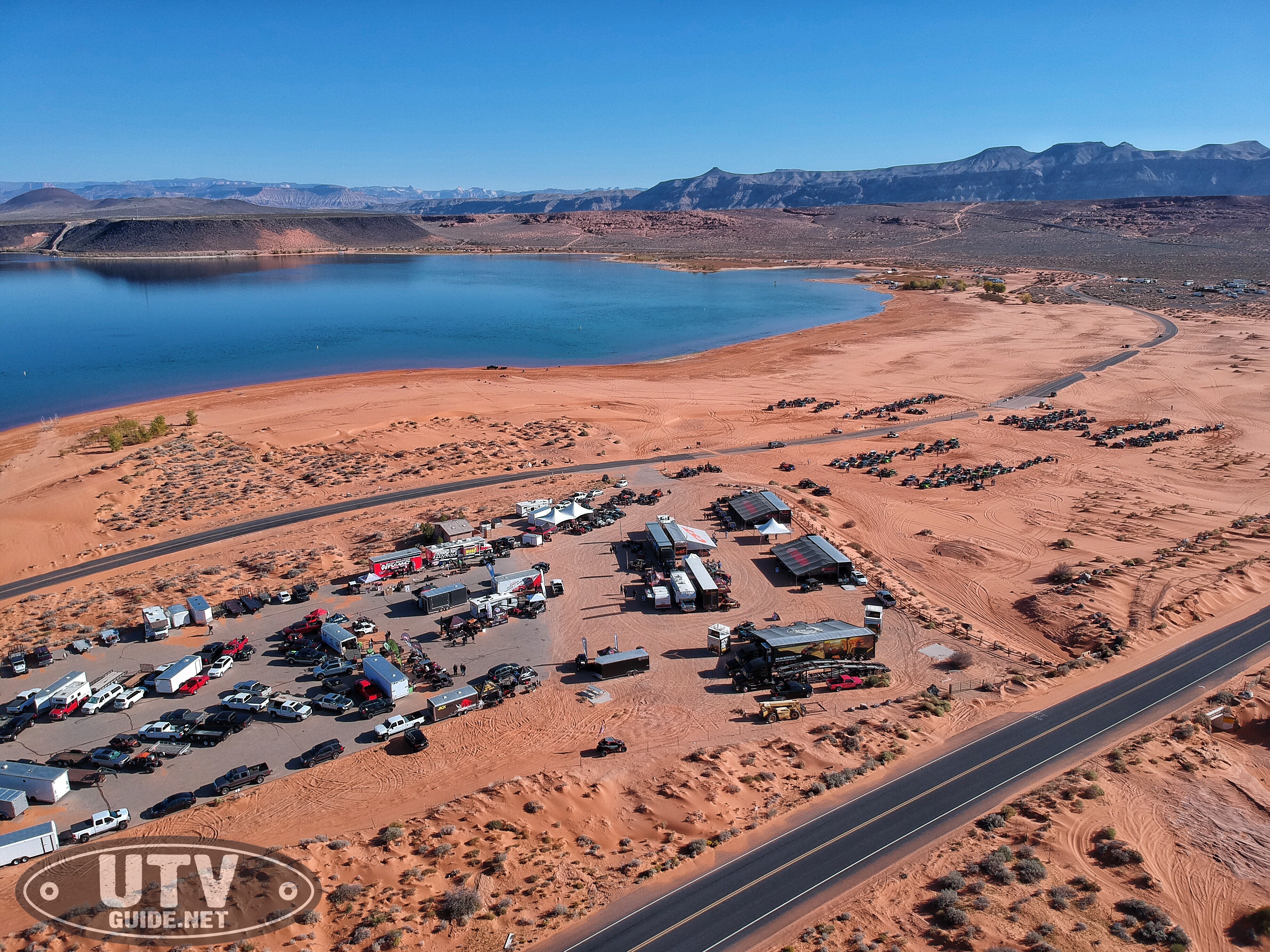