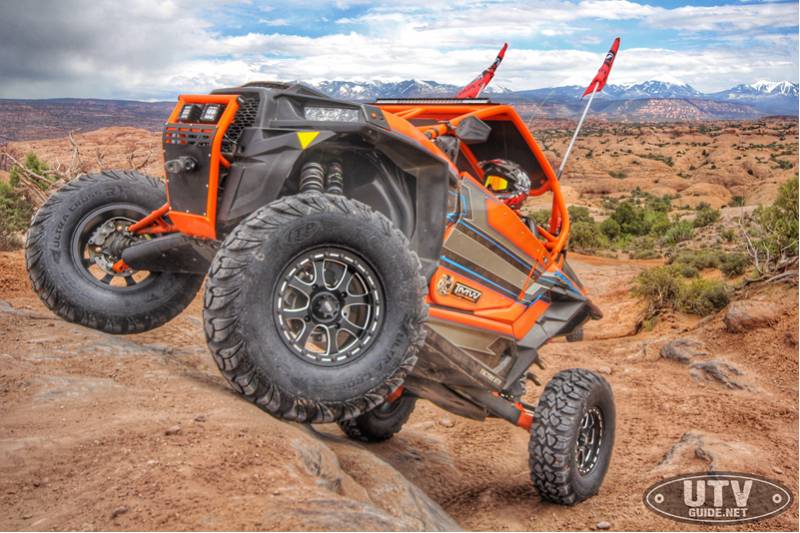 Discount Tire Rally on the Rocks is pleased to announce the Seventh annual
UTV/SXS Rally in beautiful Moab Utah, May 10-14, 2016

Rally on the Rocks had over 20 distinct trails to choose from. There are no bad trails in Moab as it is arguably the most scenic, unique place on the planet and is perfectly suited to UTVs.

For this year’s rally, we brought two vehicles and tapped our friend Brad Goodfellow (see Rally on the Rocks Event Recap for Brad’s trip report) to drive one, while Jon Crowley drove the other. Our Polaris RZR XP Turbo was built by TMW Offroad and we have used it in many different terrains including dunes, rocks, desert and even snow. For this trip we ran 32-inch ITP Ultracross tires mounted up on a set of pre-production beadlocks from ITP. Our Polaris RZR XP 1000 FOX Edition has been in our fleet for over a year and this is its second trip to Rally on the Rocks (see  2015 Rally on the Rocks). This RZR had a SDR Motorsports cage, doors and bumper and we ran 32-inch MRT X-ROX tires mounted up on 14-inch OMF billet center beadlocks.

The 5+ rated Hell’s Revenge trail exposes great expanses of slick rock sandstone with slopes so steep you will wonder if your tires will have enough grip to climb the obstacles. These very steep climbs and descents are not that difficult, but also not for the faint of heart. The most extreme obstacles are Hell’s Gate, Hot Tubs and the Escalator can be bypassed. ITP coming down the Escalator on Hells Revenge

AreaBFE is a 320 acre recreational park just a few miles south of Moab.  The land is privately owned, but open to the public.  Donations are accepted and help with maintenance (donation statue near the entry).

We took on the trail called Green Day and part of Strike Ravine.  Green Day has some tough obstacles, but most have bypasses.  Strike Ravine is easy but scenic and takes you on a nice loop through Area BFE.

There are also some cool obstacles right near the parking area that we played on. Thursday – Behind the Rocks

Behind the Rocks is an 8+ rated trail that offers some extreme obstacles, some with bypasses and others like White Knuckle Hill do not. Behind the Rocks is one of Moab’s most challenging trails, and not for the faint of heart. The trail starts just south of town on a dirt road. You aren’t very far into it when you are treated to Guardian Hill (or Gatekeeper), a very rocky, sandy and steep hill. If this hill gives you a lot of trouble then you should be prepared for a day filled with issues. It’s a good test to see how you’ll do on the rest of the trail. HCR Racing Climbing Gatekeeper on Behind the Rocks

At about 3.5 miles into the trail you’ll come to the next challenging obstacle. High Dive has a bypass, but many in our group chose to take it on. High Dive is a very steep and bumpy hill. At the bottom of High Dive is Upchuck. Upchuck is a slick, steep hill with a significant crack in the middle that most successful climbs will straddle. Slipping into the crack can spell body damage or worse. More: Arctic Cat Media Ride on Behind the Rocks

Moab Rim trail ascends steeply tilted rock strata to the top of Moab Rim. The trails starts off with Devil’s Crack then it gets even more interested at the “Z” turn. Once at the top, the views are spectacular. There is even a cool sand hill to play on. MSA Wheels taking on the Z-Turn on Moab Rim The 8 rated Cliff Hanger trail begins with stair step descent right off the road then crosses Kane Creek. Then the trail climbs up out of the creek with several challenging obstacles before hugging the cliff with Jackson Hole several hundred feet below. The trail is just under 5 miles long and ends with awesome panoramic views of the Colorado River and the La Sal Mountains. Giving a tug to a broken friend up Cliff Hanger

Rally on the Rocks event offers trails for the beginner with incredible scenery and vistas to the most challenging and demanding that will be sure to test driver and machine. Each day they have numerous guided, UTV friendly, trails planned throughout the Moab area. Many including casual scenic routes and demanding technical routes for the most experienced operators.

Rally on the Rocks raffled off a Polaris RZR XP 1000 in order to fund the build on a new Polaris RZR XP4 1000 that was built for Grand County Search & Rescue. Rally on the RocksUTV Event