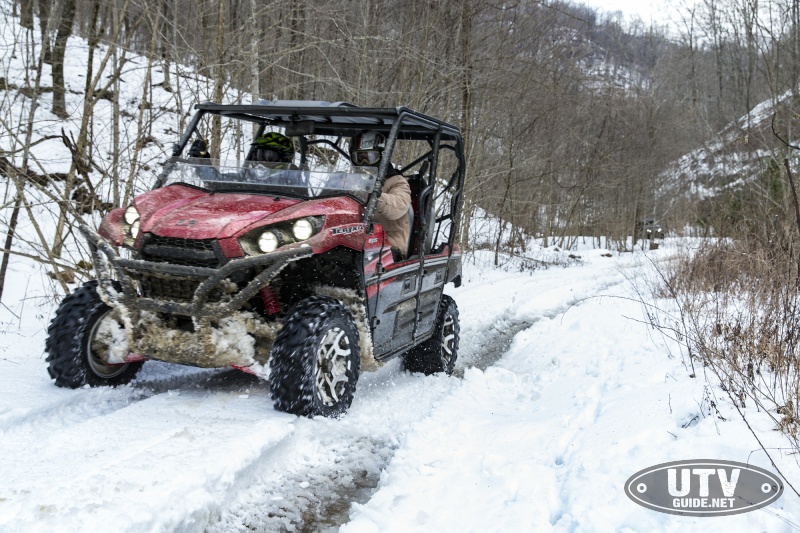 When I get a call about testing a new vehicle in the dead of winter, my first assumption is warmer weather and some sort of desert excursion in the southwestern United States. However when Kawasaki extended the invite to its 2016 Teryx Winter Adventure, something told me I wouldn’t be heading west.

While sunshine and short sleeves would have been fun, I was equally as excited to learn we would be riding the Hatfield McCoy trail system just outside of Logan West Virginia. Despite living in North Carolina, Ive never ridden the Hatfield McCoy trails and this would prove to be a great opportunity to experience the trails on an all purpose offroad vehicle. After arriving at the hotel, I retired to my room to read up on all the new features of the 2016 Kawasaki Teryx line. Getting mother nature to cooperate in the middle of winter can sometimes make media events interesting and Logan was definitely reeling in the after effects of a major winter storm when I arrived. For an area that rarely sees any significant snowfall, they received 18 inches the week prior and there was still 5-6 inches of snow covering the trails by Wednesday. In fact, the weather along the east coast was still so unpredictable, I happened to be the only one out of the second waive of journalists to make it in by Wednesday morning.

Our day began at Keefers Powersports where Kevin Mann, Program Director for Kawasaki, provided us with a walk around of the new 2016 Kawasaki Teryx 4 LE and all of the new features. Mann billed the Teryx as the Ultimate Adventure Vehicle with an emphasis on durability. An industry leading 3 year warranty suggests Kawasaki prides themselves on, and is confident in its ability to produce a vehicle that stands up to abuse.

While the Kawasaki Teryx is certainly a dual purpose vehicle, my first impression was that the 2016 model appeared a little less utility and a little more sporty thanks to a redesigned hood, headlights and front bumper. The camouflage model and all LE models feature four LED headlights, independently controlled in pairs and both offering high and low beam settings with different illumination patterns. The redesigned hood with notched fender wells gives the 2016 Teryx a more aggressive look and a new hood latch system allows for quick easy access to the engine compartment without having to tip the entire hood away from the vehicle.

The cab is noticeably different from previous models and drivers who prefer a custom tailored driving experience will appreciate the new tilt steering column and tool-less drivers seat adjustment. Just pop the lower seat cushion off with a small lever and you can slide the seat forward or backward as you please. At 6 2 I had the seat as far back as it would go and could have used another inch or two of room but it was a win to be able to adjust it at all. The new three tone color matched seats were an eye catching addition and are available on all models except the camouflage versions.

Another new feature that drivers will be quick to notice is the new two piece dash. Mann explained previous models required some heavy disassembly to remove the dash so the new design simplifies the procedure. The dash also comes with conveniently molded areas for an optional Jenson audio system available as an aftermarket add on. If you find yourself wiring up a winch or more external accessories, you wont have to worry about punching holes in the dash for switches either as the dash includes four pre-molded switch accessory blanks. All in all, the new cab is very clean and significantly updated over previous models. As far as performance is concerned, the 2016 Teryx makes use of the same 783cc V twin engine as previous models. This power plant has proven to be a powerful yet reliable engine package for the Japanese manufacturer and while it might not have the get-up-and-go to satisfy avid dune goers, it fits the bill for the adventure seeker very well. Kawasaki retained the FOX Podium 2.0 shocks from last years model however the 2016 models feature more optimized settings than previous years.

The only real under the hood improvement was the inclusion of a spiral bevel gear box in the rear differential. Tyler Furman, Assistant Manager Research & Development stated that the non machined straight bevel gear box, although durable, was prone to making more noise due to tolerances inherent to the design. The spiral bevel gears are machined for a more precise fit and because of that, ultimately provide less vibration and noise than the straight cut gears.

Our excursion for the day would take us from the tiny town of Man on a 50 plus mile trek to the town of Gilbert and back. For those unfamiliar with the area the Hatfield McCoy trails consist of 700+ miles of trails stretching across southwestern West Virginia. The entire Hatfield McCoy Trail system is actually comprised of 6 individual trail systems that connect small area towns and provide a wide variety of terrain for visitors. We would be driving the Rockhouse trail system which provides a good variety of terrain, lots of elevation changes and primarily a mix of easy and more difficult rated trails.

Much of the trail system is carved right out of a hillside so that made me think twice about getting too carried away but slowing down really made me notice some of the features that I normally wouldnt pay as close attention to, starting with the engine braking. As we changed elevations numerous times throughout the day, I found I didnt have to ride the brakes at all. In the event I felt I was going a little too fast downhill, a quick tap of the brakes would slow my decent and then the engine braking would cary me smoothly and controlled to the bottom.

EPS is becoming a standard feature on UTVs today and the Teryx automatically adjusts the level of assistance provided based on the vehicle speed. This provides comfortable and controlled steering at all times. One thing I wasn’t crazy about was the thicker over molded steering wheel. Im actually not sure if it was the circumference of the wheel itself or the wider grip areas located at 10 and 2 on the wheel but something about it just didnt feel right in my hands. Certainly a small complaint but something I noticed. The automotive grade painted plastics and deluxe 14″wheels on the LE models really pop in the wintery conditions.

As we made our way down the trail, something I recalled from the original Teryx 4 intro way back in 2012 was how tight the machine felt. From the steering to the suspension to the absence of transmission noise when stepping on and off the gas, the Teryx just feels smooth and solid. There were virtually no vibrations or strange rattling sounds and the Teryx responded immediately in every situation.

While I did my best to fall in line and travel the same speed as the rest of the group, on a few occasions I held back so I could experience the vehicle at speed while chasing down the machine in front of me. With almost half the suspension travel of some of the pure sport models on the market, you might think the suspension would leave something to be desired but again, in every situation we came across the Teryx provided a comfortable and controlled ride. Because there are so many elevation changes, water runoff creates plenty of potholes and trenches and the FOX Podium shocks softened the ride without a problem.

After a few photo stops we enjoyed lunch at a Pizza Parlor in Gilbert. Theres something that makes me smile about seeing a whole line of UTVs parked right outside a store or restaurant. In this day and age where activist groups are fighting to close lands, Im delighted to see a community embracing the UTV industry and it gives me hope for the future of offroading. Considering we were in West Virginia, our host lined up a tour of a local moonshine distillery, one of only a handful operating in the state (at least legally). The owner gave us the rundown on the whole process from start to finish, minus a few details about secret ingredients that he claimed were unique to their process. I passed on sampling it however everyone in the room caught a strong whiff of a batch of uncut 160 proof shine straight out of the still when he took the lid off. The final stage for that particular batch was to be cut or diluted down to about 90 proof which is what they are legally allowed to sell. Following the tour it was back to the trails for a few more photo ops as we made our way back to Man, this time through mostly untouched snow. The Maxxis Bighorn tires gripped extremely well, even in those moments when I ventured outside of the leaders tracks and cut through fresh powder. You could definitely feel a difference in the steering as the Teryx pushed through the snow but it never missed a beat and kept right on climbing. Considering the cold and wet conditions, I was very impressed at how well protected the cab is from the elements. The full size doors seal out mud and water extremely well and the fenders limit how much spray is able to reach the occupants inside the cab. Although I spent most of the day in a Teryx 4 LE model, there was one Camouflage Teryx unit in our fleet. Amazingly both the 2 seat and 4 seat models share the same wheelbase with the 4 seat version stretching just seven inches longer in overall length. Kevin Mann originally told us that the goal was to up the carrying capacity while still feeling like youre driving a 2 seat model. In place of the rear passenger seats, all Teryx models feature two 28 gallon sealed storage containers and a gas spring assisted dump bed. The Teryx 4 model offers enough bed storage to carry a cooler with you on the trail but the bed capacity is limited to 249 lbs and it does not offer the tilt feature like the Teryx model.

After a solid day behind the wheel I can confidently say that Ultimate Adventure Vehicle is a pretty accurate description. The Teryx 4 provides a comfortable solution for getting you and 3 of your friends out into the wilderness with the performance to tackle most any obstacle and the comfort features to ensure you wont be exhausted after a long day on the trail. Rear passengers will appreciate the stadium style seating providing a little better visibility and the support bar serves two purposes; secure handholds for the passengers while providing additional structural support to the roll cage.

While wed love to see a big bore pure sport UTV from Kawasaki someday, the Teryx and Teryx 4 models are a great option for those enthusiasts who want to enjoy the outdoors in comfort and at an affordable price. Backed by an an industry leading 3 year warranty, the Teryx and Teryx 4 models provide plenty of thrills and peace of mind for any adventure, no matter where the trail takes you. 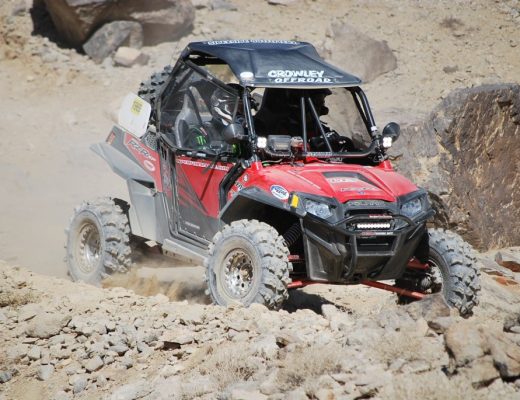