Minneapolis, August 26, 2009 –For the third year in a row, Jagged X and their No. 1919 RANGER RZR S dominated Best in the Desert’s “Vegas to Reno, The Long Way” race. The No. 1919 desert race team not only finished but took first place honors in what is credited as being the longest off road race in the United States. The team finished the race in 30 hours and 29 minutes, 15 minutes faster than the second place finisher.

This year’s event was an amazing three-day staged race covering 998 miles of the grueling Nevada desert. The Jagged X RANGER RZR S was piloted by driver of record, Brandon Schueler and Blake Van de Loo, along with navigators Chad Riccio and Mike West. The No. 1919 started in the fourth position on Thursday prepared to take on the first 332 mile stage. Within the first two pit stages, Schueler had overtaken the lead position, and with only a few minor problems, finished the first day well ahead of the competition. Day two and three were much the same and in the end, the Jagged X RANGER RZR S ended up first across the line completing the grueling 1000-mile course and taking the top honors for the third year in a row.

In addition to winning the UTV class, Jagged X also managed to finish ahead of several other classes in the overall standings including the 1700 Jeepspeed and the new 4400 Ultra 4 class. Unofficially, the No. 1919 team finished approximately 125th out of the field of more than 270 starters, in more than 20 classes.

“It is just amazing what Jagged X has accomplished since there first ‘Vegas to Reno’ run. The first year was about just finishing the race and now it is about showing that the RANGER RZR and Jagged X can compete well beyond the 1900 class,” said Craig Scanlon, director of Off-Road Vehicle sales for Polaris. “We congratulate the whole Jagged X team on the win and look forward to supporting Jagged X the rest of the season as they deliver a third straight BITD points championship.”

The win moved the team into the lead points position for this season with three races remaining. The next race is the Bilek Racing Silver State 300, September 25-27, in Mesquite, Nevada.

About Jagged X
Jagged X is a family owned business located in Phoenix Arizona. Formed in 2003 from a passion for off road vehicles, Jagged X quickly became a pioneer in the custom side by side segment and is known for bringing their customers quality and innovation with their own brand of style. In 2007 Jagged X formed an aftermarket partnership with Polaris industries with the introduction of the exciting new RZR. They continue to lead the pack in the development of exciting products for the RZR such as long travel suspension, billet and tubular accessories. More information about Jagged X can be found at: www.jaggedx.com.

About Polaris
With annual 2008 sales of $1.9 billion, Polaris designs, engineers, manufactures and markets off-road vehicles (ORVs), including all-terrain vehicles (ATVs) and the Polaris RANGER™, snowmobiles and Victory motorcycles for recreational and utility use.

More Vegas to Reno UTV race coverage can be found at: UTVWeekly.com 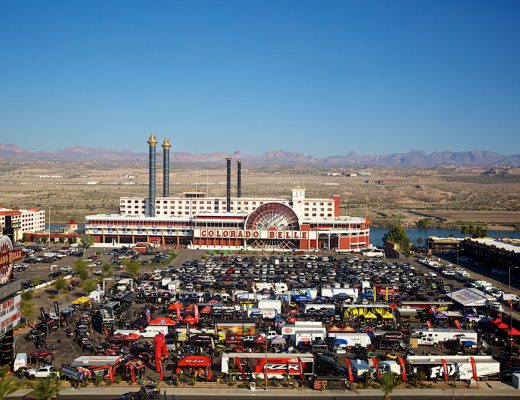