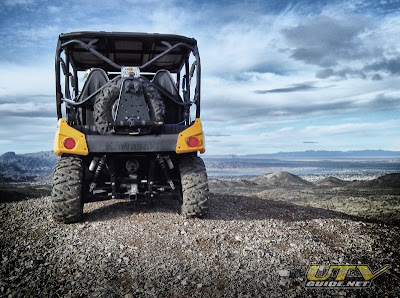 We had an overcast day as it had rained the night before the ground of the desert was moist and no dust as we left Lake Havasu.  We drove about 10 miles out on trails that went up to peaks and down in gullies.  We stopped to look at Lake Havasu in the distance as it was a really pretty site, but we were headed away from the lake and up in to the mountains.  The four Teryx’s, three Teryx4 and one Teryx started again back on to all types of terrain rocky and up hills and down hills and through many washes and through gorges with high rock walls on either sides of us.  It was really pretty to see the AZ cactus all around us.  The Teryx units handles great on all the different types of terrain that the desert was throwing at us.

The group stopped several times to admire the beautiful scenery, and the mountain range ahead that we would climb.  We could also see ahead the weather was starting to change to snow and rain.  Just as we had started to climb the mountains we had some rain that turned in to hail and then in to snow.  The trails started to disappear in the snow but the Teryx kept on powering through, even with the snow coming down as hard as it did.

Slogging through the snow on the way to Hualapai Mountain Resort

The group continued on and  quickly realized this ride was turning into an adventure.  At this point we were on tight slippery trails yet the Teryx offered a sense of security, comfort and power to tackle on the terrain. We really relied heavily on the GPS as the trails disappeared in the white snow. We arrived at the Hualapai Mountain Resort (owned by a retired Judge from Lake Havasu and his wife) at about 3:00 p.m.  We were cold and wet but could not believe what we had just accomplished.  We all had huge smiles as it was really an adventure day covering 110 miles in all types of weather and terrain.

The people at the resort were really surprised to see us as they did not think we would have been able to make it.  They offered a really nice menu and we were able to fill up on some great food before they closed.  As we ate we watched out the window as the snow kept falling.  That night the news forecasted another 1 to 2 feet of new powder by morning.

Fresh snow on the Teryx4 in the morning

The forecast turned out to be correct as we woke to about two feet of fresh snow.  With the restaurant closed due to the weather we munched on snacks that we had brought with us. We had another 110 miles back to Lake Havasu and decided to get an early start.

We wiped off the Teryx units as they had a ton of snow on them.  We layered up and started out on the trails once again We were going through deep snow with now problem up hills and down hills on the Teryx.  It was fun to see all the deer running alongside going through the snow.  It was fun to see cactus with so much snow on them.  We were going back a different way so all day we were seeing new sites and terrain.

Teryx4 coming down the mountain

We finally started getting back down to the floor of the desert and running out of the snow.  Right before we got out of the snow we saw something standing right in the middle of the trail.  As we got closer to it we saw how big it was.  It was a huge cow that I think wanted to know why we were on this trail!  He was accompanied by a small herd of cows and bulls, and some had quite large horns that we did not want to test on the side doors of the Teryx.  The large cow finally moved out of our way but not without a stare down.
We finally made it to a lunch spot in Wikieup, AZ.  We all had some warm food and re-fueled the Teryx’s as we had gone a long way on a tank of fuel.  It was really nice that the Teryx has over 7 gallons of fuel so you can do long trips like this.  Lunch was fun as we were able to warm up and fill our bellies and get ready for the next 50 miles to Lake Havasu.

It was fun again getting back on the trail as we had to climb one last range of mountains back in the snow for a few miles and then back down to the desert floor for the final run to Havasu.  It was a really nice ride as it had warmed up and we had started peeling off layers of cloths we had on to keep warm on the morning ride.  The Teryx had just been in two feet of snow and now we were in dust and rocks and the winding trail’s and could see Lake Havasu in the distance.  We arrived back in Havasu at about 3:30pm.  We all got out of the Teryx and just sat on our trailer for a few minutes and talked about what we had just experienced in the last two days and over 200 miles of adventure.

I would like to thank our guides Richie Hudson and Rick “Wally” Wallace of Side X Side Outfitterz for navigating us through the snow and adverse conditions to our destinations.  It was really quite the adventure!

More information on the Kawasaki Teryx and Teryx4 can be found at: 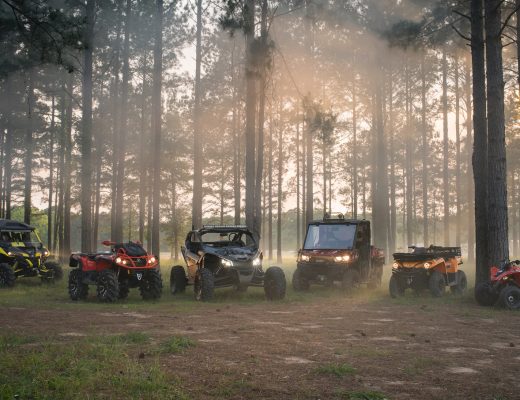