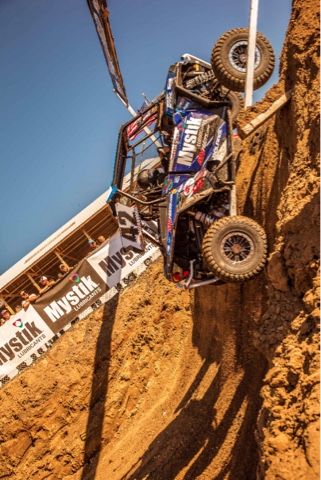 Minneapolis, September 23rd  2015 – It was another intense weekend of racing for Terracross Championship. The third and fourth rounds took place at the annual Sno Barons Hay Days, September 12th and 13th. Haydays is known as the kick off for winter for snowmobilers and nationally known swap for power sports enthusiasts.

Walker Evans/Polaris RZR RJ Anderson came out on top on Day 1, with the Final win!  While Go Pro’s, Dana Creech took the Final on day 2!

The TerraCross track was once again grueling and made for some tough racing and included TerraCross’ signature over-under jump, as well as more technical sections. The course once again introduced the Mystik Mangler section, which incorporated a large dugout wall section of tires, allowing the RZRs a dramatic launch over the tires.

Mickey is excited about his performance this weekend and is looking forward to the upcoming events “Mystik goes hand in hand with Polaris Industries,” added Thomas. It’s perfect when you have a RZR. They build an awesome product. It’s a good partnership to have. They support TerraCross. Being a Mystik sponsored guy is pretty cool.”

The final doubleheader of the Terracross Championship season has been postponed, and the new date and location will be announced in the near future after some issues came up for the event originally scheduled for Charlotte Motor Speedway.  Joe Duncan said there is still plenty of action and activity that will be at Charlotte!  “This will be an event I’ve envisioned as we grow the Terracross brand. Charlotte will be a true Terracross Experience, with racing, drive and ride opportunities, autograph signing and up close and personal interaction with some of the top racers in the world!”

The final doubleheader weekend of the Terracross Championship to be announced.

About TerraCross
The TerraCross Championship features the best of off-road and action sport athletes competing on rough, tough and muddy courses complete with obstacles such as rocks, logs, crossover jumps and tight turns. With events televised on CBS Sports, spec Polaris RZR XP 1000 vehicles, and top athletes from diverse racing backgrounds, TerraCross has become one of the premier racing series in the world.

High Lifter’s ATV Mud Nationals Celebrates its 8th Year with Over 11,000 in Attendance